Having looked at the increasing demand for financial assets in the first part of this essay, we now turn to look at the supply of financial assets. The business sector is unable to supply the required amount of financial assets, leaving balancing supply and demand to the government and household sectors. Once the housing bubble burst, the government sector was put into the position of being the key source of supply. This can only be accomplished by large fiscal deficits, which implies slow growth. Since this slow growth was the result of policies that were aimed at increasing growth, it is unlikely that this structural situation will be easily changed.

The reason I emphasise the role of stock-flow norms is that the levels of savings flows are not remarkable at present. What is unusual at present is the high ratio of the stock of financial asset holdings relative to income (in this case, I scale by domestic income - GDP). The desire and ability of investors to hold a large stock of assets - documented in Part 1 - forces the stock of supply higher. This is what sets the present era apart from the rest of the post-war period. 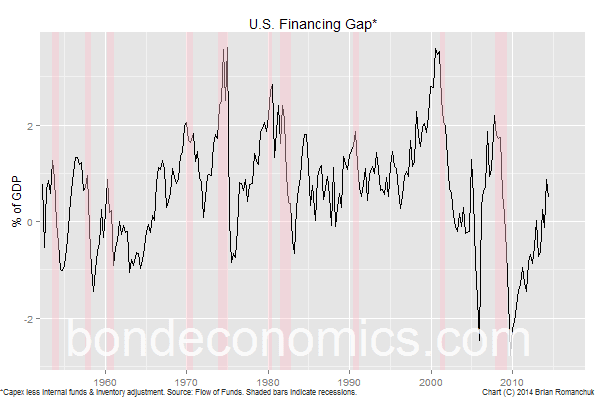 One non-obvious regularity that we see within the national accounts is that business sector investment is largely self-funded. The chart above shows the financing gap for U.S. Nonfinancial corporate businesses. It is defined as (from the U.S. Flow of Funds report):

What we see is that the financing gap is relatively small (from a macro perspective) - often on the order of 1% of GDP. What does this tell us? It essentially says that internally generated funds are roughly enough to finance capital expenditures. (This is not too surprising from the perspective of the Kalecki profit equation.) The amount of borrowing they undertake may deviate from the financing gap, as shown below. In the current environment, there is more borrowing than is indicated by the financing gap; this is likely the result of borrowing to fund dividends and share buybacks. However, this use of funds is just borrowing from one set of investors to hand money to any set of investors, and so it just a reshuffling of the financial assets available. 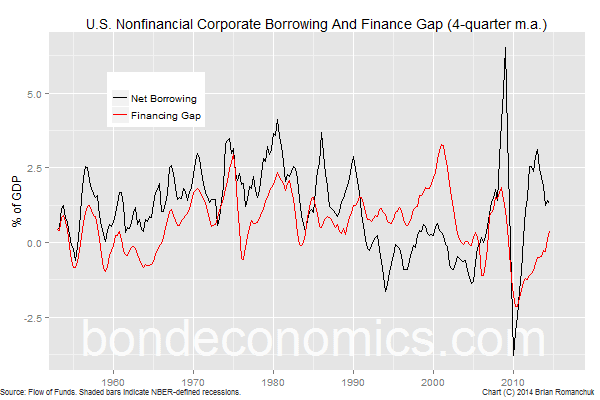 Examination of the above charts show that the current environment (post-2001) is different - the financing gap dropped to low levels, and was negative for most of the post-crisis period. This means that the corporate sector does not need to borrow to invest, and so the desire to increase financial asset holdings outside the business sector is not finding an outlet in increased fixed investment. For example, as I showed in Part 1, the retirement savings complex is steadily purchasing credit market assets that amount to a flow of about 1.5% of GDP. 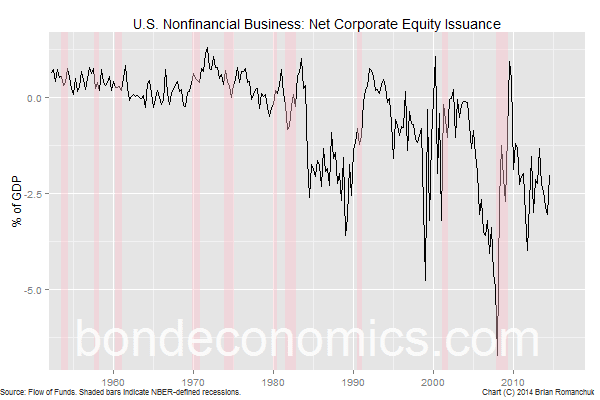 In this analysis, I focus on debt flows, even though equities are a large portion of private sector portfolios. This is because net equity issuance has turned negative since the mid-1980s. The equity market is no longer a net source of funding, its role is to allow owners of private companies to liquefy their positions, and to send pricing signals. Market capitalisation is only able to grow as a result of upward revaluation of shares, which is aided by the reduction of shares outstanding generated by buybacks. This generates instability, as valuations are more stretched than in earlier eras. Moreover, it means that private savings flows - which includes the proceeds of sold equities - have to be invested in fixed income markets. 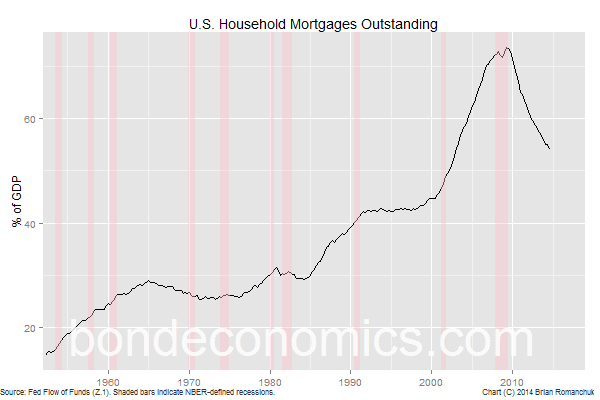 The chart above illustrates the U.S. household sector's doomed attempt to supply financial assets - in the form of mortgages. It was unable to service the debt, and the sector has been forced to retrench. At present, there is increased issuance of dubious auto loans and student debt, but these debts are obviously low quality, and so they are unlikely to provide a large enough outlet for inflows to financial assets. 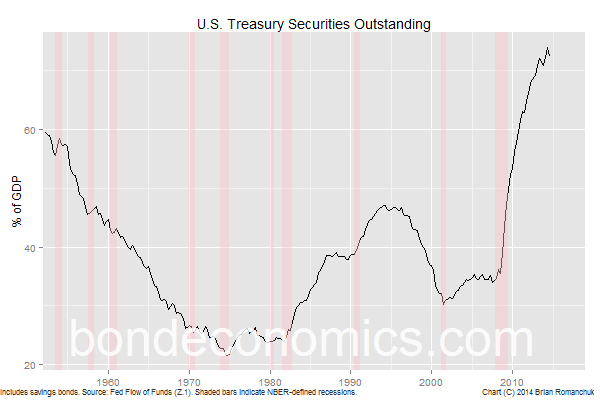 Since the other sectors are unable to provide the financial assets to allow entities to hit their target wealth-to-income ratios, the government has to fill that role by default. Returning to the Treasury -to-GDP ratio chart above, its movements make much more sense in the context of the previous analysis. The ratio fell from the high levels from after World War II to hit a low in the inflationary 1970s. It then reversed higher, which is the result of disinflation and the increased desire of entities to hold a higher ratio of assets to income. 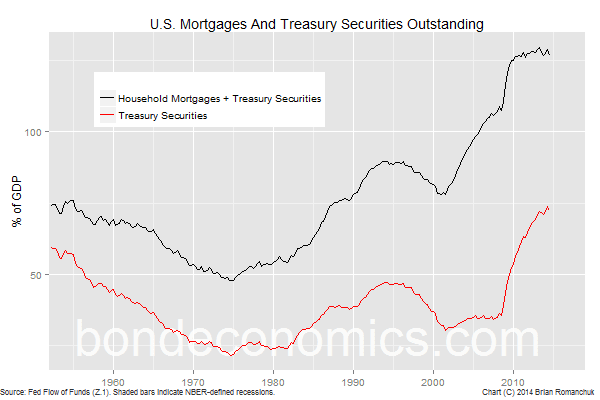 The Clinton-era reduction of the debt-to-GDP ratio was only a temporary reprieve from this trend. Mortgages moved to replace Treasurys within private portfolios. As shown above, the aggregate of these markets followed a smoother trend, which suggests that the driving force for the dynamics was investor preferences. Once those mortgages proved to be bad assets, Treasury securities reverted back to a more prominent position within investor portfolios.


Although the ratio of financial assets-to-GDP may stop rising, it has reached such a high level that just keeping the ratio steady implies much more debt issuance than the corporate sector can safely sustain. The imbalance between desired savings and investment is helping cap nominal GDP growth at the 4% annual rate we have seen this cycle. Although the economy is not in a deflationary state, this is not enough to reduce the significant slack that remains in the labour market, as evidenced by various measures of under-employment.

"Fixing The Debt" - Not Any Time Soon


(I should preface this section by noting that I believe that the government debt-to-GDP ratio is a piece of meaningless trivia for nations with a free-floating currency. However, not everyone agrees with that assessment, and so I will discuss whether it can be easily lowered.)

Although the debt-to-GDP ratio will trend lower until the next recession hits (and depending on the current turmoil, that could be soon), it will take some major policy changes to reverse course.

As we see, pretty well any mechanism to reduce debt will require reversal of other signature policies of the recent decades. Although possible, I see no sign of mainstream political parties moving towards enacting such policies, as I am unaware of any politicians that would want to run a campaign with a platform calling for reduced wealth.

* There historically was a debate about whether higher interest rates would be inflationary, up until the 1970s. (Amongst market analysts, at least. I ran into that idea a few times when I went through the archives during my first financial job. I am unsure what the academic community thought about that topic at that time.) The Volcker episode moved the consensus firmly towards its present stance - higher interest rates reduce growth and hence inflation. I have some links and further discussion on this topic here.