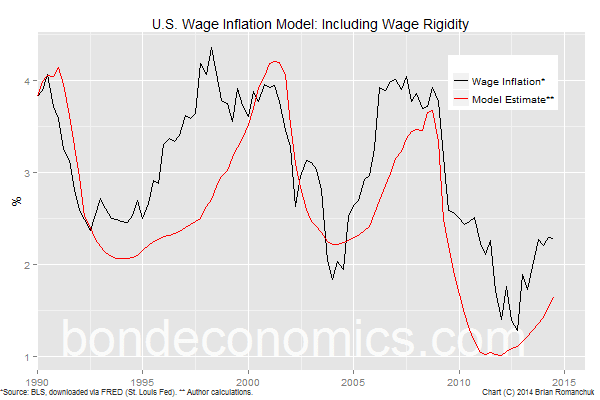 This article is a follow-up to my previous post about the unemployment gap. I explain more formally how incorporating nominal rigidity - the well-documented avoidance of wage cuts - can improve the recent performance of a simple wage inflation model.

I go through the steps for building a model for U.S. wage inflation based on aggregate data. The model is a straightforward first-order linear system, so I will not attempt to relate it to the existing academic literature, which features very similar models.

The model parameters I used were fairly arbitrary, and they were picked to create a model that I believe is acceptable for forecasting purposes. For example, it is possible to get a better fit to the series by incorporating more information, most importantly the previous error prediction. This is exploiting the fact that the previous value of inflation is a good forecast for the current period. However, this no longer helps for using the model to generate conditional forecasts - what does the model say about inflation one year forward if the inputs follow some particular forward scenario?

As I discussed in the previous article, I also believe that the economy should be dis-aggregated; there is a divergence between the fortunes between those who have remained in the full-time work force versus the others who are only marginally attached to the labour market.  But dis-aggregation creates a more complex model, which is beyond the scope of this article. Instead, I am focussing on seeing how to improve a model based on aggregated data (that is, there is a single unemployment/output gap that describes capacity utilisation in the entire economy).

Most analysts are interested in consumer price inflation rather than wage inflation. These two types of inflation are linked, but wedges between them can occur. For example, if profit margins reverted to lower values, wages would be rising faster than consumer prices. 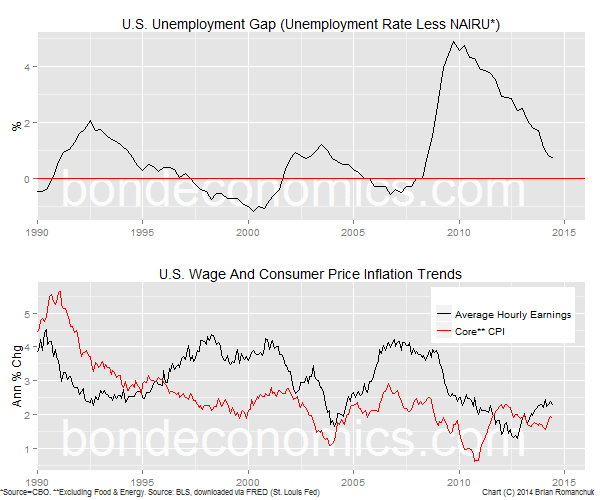 The variable NAIRU - which is the nonaccelerating inflation rate of unemployment - is calculated by the Congressional Budget Office (I use the "Long-Term NAIRU"). For my purposes, the calculation of the NAIRU is a black box.

As a first pass, I create a model estimate for quarterly wage inflation (which I denote as W(t)) as follows:

The chart below shows the results of this overly-simplistic model. 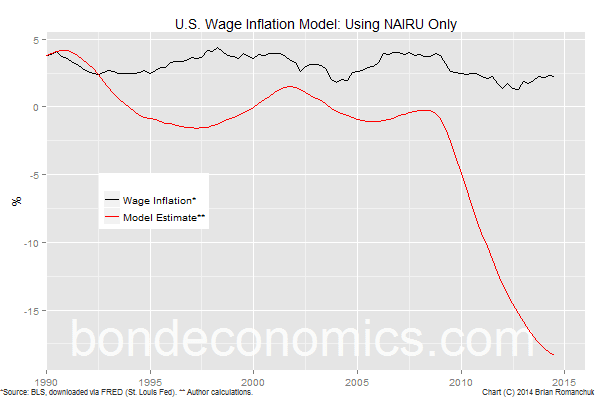 The modelled wage inflation drifts away from the actual wage inflation rate, and so this is a fairly hopeless model. The only way it can be saved is to redefine the NAIRU so that the mean unemployment gap is zero across the cycle. 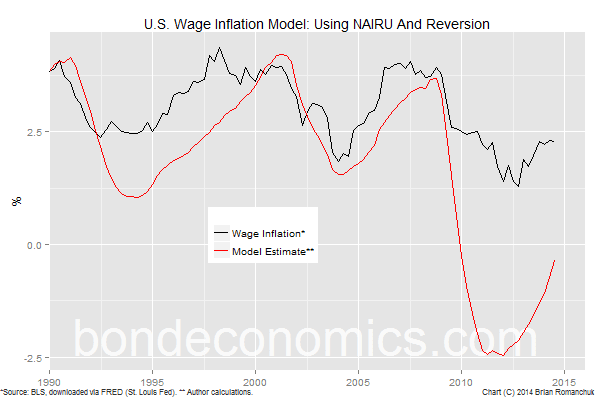 I then added an input that causes the modelled wage inflation rate to revert towards the actual rate. This can be done in a few justifiable ways:


I followed the last strategy, as it is the cleanest and most modern-sounding. The problem with using survey inflation expectations is that we now have to forecast them, and the whole point of our model is to determine what we think rate expectations should be. Since 1990, inflation expectations have been stable, so all of the above techniques yield similar results.

The use of breakeven inflation within the model is complicated by two factors - there are no data before the end of the 1990s in the United States (although other markets have longer histories), and that breakeven inflation rates are often what users of the model want to forecast. If you are a central banker or academic, it is reasonable to use market-implied expectations within models; you can hope that the markets are reasonably efficient. But if you are trying to determine fair value for securities, you should not feed back market expectations into your valuation model. (Well, you can, but you will tend to discover that your models show that markets are always fairly valued.)

The results are as shown above. The fit is better, but the modelled value "spins out of control" in the post-crisis period.

In terms of understanding the dynamics, the added term means that the unemployment gap can be persistently positive or negative, but the wage inflation rate will only tend towards a fixed offset from the inflation expectations. This means that despite the word "nonaccelerating" in NAIRU, inflation will stop moving within this model even if the unemployment rate is persistently away from NAIRU. If inflation expectations are constant (presumably anchored by an inflation target) and the economy spent most of its time near "steady state" levels, the average results would generate a linear trade-off between the unemployment gap and the level of inflation. (We do not see such output trends in practice as the model spends a considerable time transitioning between "steady state" conditions.)


It has long been remarked that nominal wage cuts are rare; instead businesses fire workers. (Cutting pay demoralises all workers; firing people has only a temporary effect on the workers who are retained.)

The NBER article Some Evidence on the Importance of Sticky Wages, by Alessandro Barattieri, Susanto Basu and Peter Gottschalk (published in 2010) looks at some of the recent evidence. The chart below is taken from that paper, and shows how wage increases avoid taking negative values. This skews the average higher than the "centre" of the distribution.
I did not apply their empirical results to my model (I have not had a chance to look at the paper in detail), rather I picked a nonlinear transformation to improve the model fit which is motivated by this skew in observed wage changes.

I once again emphasise that the threshold and the low-inflation sensitivity I picked (2.5%, 0.3 respectively) were somewhat arbitrary choices. I have not looked at the Japanese data to see whether it would fit those data. (Amongst other things, I would need a NAIRU estimate for Japan.)


Models using aggregate measures of capacity have a hard time fitting recent data; inflation is falling by less than would be expected. The preferred solution of hawks is to use this as an argument that there is much less spare capacity than the doves believe. I believe that a more reasonable explanation (but still using an aggregated variable framework) is that this is this the result of nominal rigidities. And if this explanation is true, there is less reason to fear an acceleration in inflation under the assumption that growth continues on its present trend.