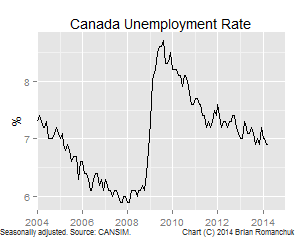 Recent Canadian data has been somewhat mixed. The Labour Force Survey for April was disappointing, but housing starts recovered. I discuss the economic data as well as the state of the Canadian inflation-linked bond market.


The unemployment rate was unchanged at 6.9%, stuck near a level it has been for a considerable time. Note that if the Canadian unemployment rate is adjusted to follow U.S. concepts, it is 6.0%, which is slightly lower than the U.S. rate of 6.3%. This is to be expected as the Canadian housing sector has not yet corrected to a significant extend. There was an estimated loss of 29,000 jobs on the month. Although that is a bad number, the data series are a survey measure (corresponding to the Household Survey), and is noisy from month-to-month. All that can be safely concluded is that the labour market is not improving much, which is all that is needed to keep the Bank of Canada on hold. 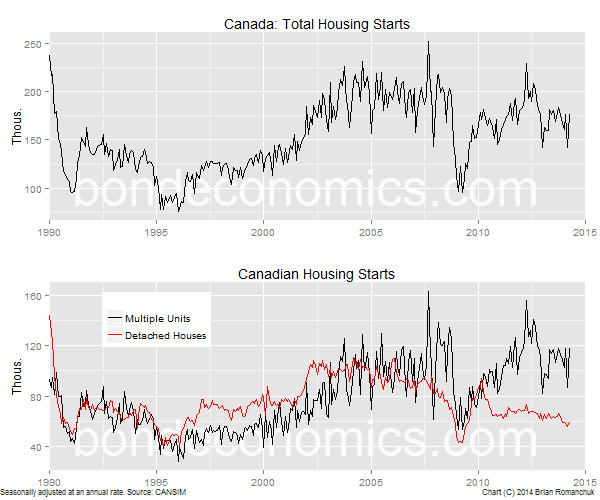 Housing starts recovered in April, going back to a seasonally adjusted annual rate of 176,000. Therefore it appears that the dip in March was weather-related. As usual, the surge back was in the multiple units category, as single unit (detached) construction remains at depressed levels. Note that these data are volatile, so it is probably best to look at them on a smoothed basis. There is no sign that the housing market is collapsing, rather it is treading water while the economy is stuck in an extremely slow growth path. 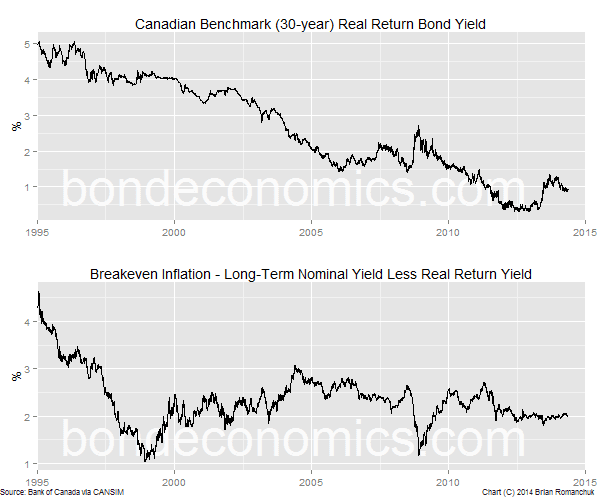 As a final note, I show the Canadian Real Return Bond (RRB's) yield. These bonds are the forerunner of U.S. TIPS, and pay a real rate of return above inflation. (See my primer on inflation-linked bonds.)  The breakeven inflation rate (as approximated by using Bank of Canada data*) has been stuck near 2% for some time. It appears that large Canadian bond investors are extremely convinced that the Bank of Canada will hit its inflation target on average.

Historically, the Canadian 30-year breakeven traded above 2%. This could be viewed as there being a risk premium above the Bank of Canada inflation target. One interpretation is that the risk premium within the breakeven rate has disappeared.

Another interpretation is that investors are sensitive to the current level of carry. With inflation below 2%, and not expected to rise any time soon, breakevens may have crept lower in response. (It makes little sense to trade a 30-year instrument based on short-term carry, but it appears that some people do so anyway.) Thus the lower breakeven rate may be a reflection of an assumption of the structural malaise in the Canadian economy continuing. (Note that Canada only issues 30-year inflation-linked bonds, and so there is not much of a short end of the curve to examine.)

Have a good weekend, and Go Habs!

* I am taking the difference between the Bank of Canada "long-term benchmark" yield series. I am not sure how good an approximation these give for the breakeven inflation rate. Looking at the historical data, it's probably with a dozen basis points of a more precise estimate. And if you are in a position to worry about a dozen basis points on the breakeven, you should have access to better yield data than I do.