J. Benson Durham of the New York Fed has recently published a staff report "Momentum and the Term Structure of Interest Rates". The report describes a portfolio construction technique that is long-only, duration neutral versus the index, yet it generates up to 120 basis points of annual excess return. I explain what I think explains this strong performance, although it would require detailed testing to validate this. I conclude with a less technical discussion of how this relates to the concept of market efficiency.

How I Would Approach This Analysis


The only reliable way of testing the results in a paper like this is to replicate it yourself. Paranoia can be a useful characteristic for financial analysts. The results in the article look reasonable, and I want to assume that J. Benson Durham wants to publish correct results. Nevertheless, relative performance analysis is tricky, and I would always want to validate the calculations before even starting to think about putting the results into practice.

Although he does look at the results in a number of ways, I would look very carefully at the correlation between excess returns and the direction of interest rates, for reasons I discuss below. I would also be mainly interested in decomposing the results into basic strategies.

Luckily for me, I do not have the total return data to do that painstaking analysis, and so that work is left as an exercise for the reader. I assume here that his presented results are correct.

Summary Of The Results


Although he looked at strategies that allow short selling, I will discuss the version of his strategy that could be applied to a long-only investment mandate. He uses the Barclays Capital total return indices for the Treasury market (he also applied the technique to other markets). The strategy is implemented by changing the weighting amongst maturity buckets (1- to 3-, 3- to 5-, 5- to 7-, 7- to 10-, 10- to 20-, and 20- to 30-year maturities). Constraints are added such that:

Using those constraints, the portfolio weights are determined by optimising what I refer to as a the portfolio prospective return. The prospective return for a maturity bucket is the the total return for the sub-index for the past N months. In other words, past returns are assumed to be predictive of future (relative) performance. (Note that since we are interested in relative performance, we do not care about the level of the "prospective" return for a maturity bucket, rather what it is relative to the other maturity buckets.) The most interesting choices for the  "lookback period" (N) were about 12 months (results are presented for a number of choices for N).

The portfolio weights are relatively stable over time. During most of the sample period (December 1996 - July 2013) the bulk of the model portfolio was in the belly of the curve (5- to 10-years). But during the last 18 months of the period, the portfolio switched over to a barbell, with holdings in the 1-/3-year and 10-/20-year buckets. This change of behaviour seems predictable from basic yield curve analysis, as I discuss below.

The paper covers a lot of ground in attempting to explain the results. But I think the results are readily understood using concepts that are well known to practitioners. 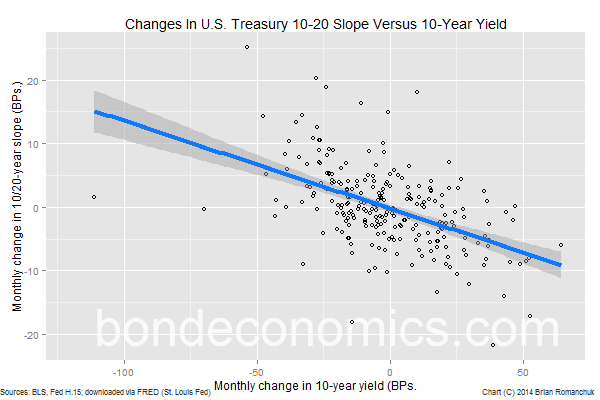 Duration neutral strategies can still be directional. The chart above gives a classic example, the 10-/20-year slope trade.
The relationship is weakened by not isolating particular trading regimes, but we see that on average, the 10-/20-year slope steepens by 14 basis points for every 100 basis points the 10-year yield falls. In other words, you expect to make money on a "steepener" if rates fall, even though you are duration neutral. Added to the directional change in slope, a 10-/20-year steepener will carry positively, and so you will make money if there is no sell-off.

The assumption of parallel yield curve shocks are thus not able to correctly characterise risks for fixed income trading. Value-at-Risk (VaR) approaches do a better job, as they should capture these empirical yield curve regularities.

An alternative way of seeing this is to use a Principal Component Analysis (PCA). The first factor loading on 20+-year maturities is typically lower than for the 10-year maturity, at least in environments where the front end is well away from zero. PCA analysis is used sometimes in the construction of "butterfly" trades to eliminate the directionality within the butterfly. (A butterfly is a 3-legged trade, in which you trade a bond of one maturity versus a pair of bonds with longer/shorter maturities.)

But the PCA structure changes if the policy rate is stuck at 0%. This was seen in Japan, and the U.S. recently. Therefore, I interpret the change in the model portfolio at the end of the sample period as a reflection of the changing PCA factor. Since the front end is now locked down, you need to extend to holding bonds with a duration longer than that of the index to generate a directional bias. If you want to hold bonds with a duration longer than the index, you are forced to also hold short-dated bonds to be duration-matched. Hence the "barbell" model portfolio structure at the end of the period.

The modern (post-1980s) bond market* is characterised by 4 main modes of operation:

The bulk of yield changes occur during in modes (1) and (3), but those are short periods. Most of the time, we are in modes (2) and (4). The period 2010-mid 2013 is an example of the persistence of the "Grinding Bull Market" mode. There was a consensus view that rate hikes were imminent for most of that period, and so there were considerable risk premiums built into the belly of the curve.

The momentum strategy used within J. Benson Durham's paper will largely pick up those long-lasting periods of carry-and-rolldown dominance. (The rate hike periods are also fairly persistent, but represent a smaller proportion of the total time interval.) This is because the lookback period is not a short period like 1-3 months, rather it is looking at relative performance over a 12-month period, which is longer than the short-lived bull and bear modes. As a result, it is no accident that most of the time, the portfolio is bulleted, which gives the optimal carry-and-rolldown for a fixed duration. This makes this version of momentum very different than a technical analysis momentum indicator which is based on things like moving average crossovers. Instead, it is picking up relatively persistent relative outperformance.

The article brings in some analysis using arbitrage-free term structure models. I am not a fan of those models, as they are too complex for whatever value they add. But if those models work at all, they should be able to generate a term structure of term premia. The excess returns for bonds in the belly of the curve are the result of rolling down the term premia structure.

In practice, traders obsess about the carry and rolldown of trades. Carry and rolldown should be highest at the points of the curve where the term premia are the most favourable. Therefore, they are achieving about the same end result as the arbitrage-free term structure models, without the analytical overhead (and model instability). This is despite the fact that a superficial reading of market efficiency would say that "carry and rolldown" should not be factor in choosing positions.


Tom Hickey characterised this paper at Mike Norman Economics as "More nails in the coffin of EMH [Efficient Market Hypothesis- BR]". I could argue both for and against this view, depending on the context.

The argument that this result does not violate market efficiency is that the strategy is taking directional risk, and the outperformance is compensation for that. Additionally, the period involved was a bond bull market, so a strategy with a bullish directional bias would be expected to outperform. Most reasonable definitions of market efficiency accept that you can earn a return premium for taking various risks, and so the results may not be too threatening for the EMH.

The arguments that this article shows that markets are not efficient are more interesting, but are more controversial.

Although it may seem surprising that there is so much market inefficiency within the Treasury market, it may be a side effect of "modern" portfolio analysis. If you ran a fund that took strategic duration positions over the past couple of decades and you outperformed your benchmarks, you would have to have been long duration for most of the time. This bias ends up looking like "beta".

To take an exaggerated  example, you could have been at 110% of benchmark duration most of the time during an extended bull market period. What you could find is that your performance is best approximated as:

In other words, your performance is all "beta" (beta = 1.1) and no "alpha" (alpha = 0), despite outperforming the index. The only way to be certain to "add alpha" is to tactically time the markets, so that you can somehow always be profitable every month or quarter. (Technically, you need to break up the correlation of your portfolio returns with the index returns.)

Although it would be wonderful to be able to guess the direction of the manic-depressive bond market market every single month, the odds of having that ability are somewhat low. As a result, efforts are expended in every conceivable other direction in order to beat the index: credit positioning, option strategies, relative value trades. Since these positions can outperform in a manner that is uncorrelated with the index overall return, any outperformance is more likely to classified as "alpha". This skewed incentive structure within the financial industry is what may allow exaggerated term premia to persist - investors lack the incentive to take the directional risk needed to crush them out..


The article is interesting, although I would take the direction of the analysis more towards the relationship between the model portfolio and the direction of interest rates. The characterisation of the strategy as "momentum" is somewhat misleading, as it is picking up persistent outperformance. Finally, it offers a new perspective on the question of bond market efficiency.

* The post-1980s bond market has different tactical characteristics than earlier eras. This partly reflects the structural changes in the economy, but it also reflects the greater technical competence of bond market participants (that is mainly the result of cheap digital computers). Strategists who do not make use of forward rate information are at a huge disadvantage versus their "forward aware" competitors.