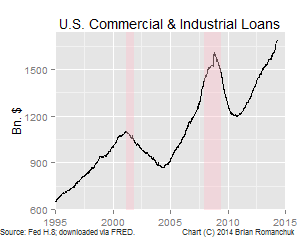 The amount outstanding of Commercial and Industrial loans ("C&I loans") is an interesting indicator of the business cycle. It shows relatively smooth growth rates during an expansion, and contracts during recessions and sluggish growth periods (as seen in the last two cycles). And at present, the amount outstanding is increasing, which is consistent with the labour market data.


When we look at a longer history (the series goes back to 1973), we see that C&I loans have worked reasonably well as a recession indicator (although the series lagged the recession on occasion). Since the series is in nominal terms (i.e., not adjusted for inflation), the level did not shrink appreciably during the recessions of the high inflation mid-1970s - early 1980s. 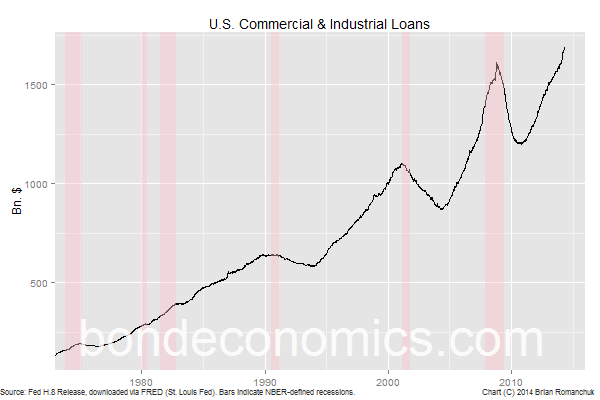 The sluggish growth periods of the early 1990s, 2000s and post-crisis period are obvious on the chart above. 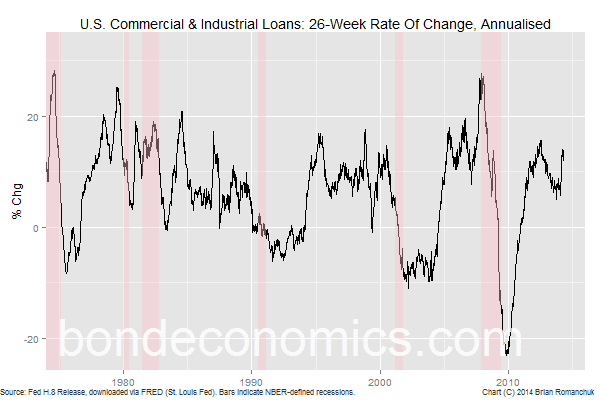 One thing that is notable is the behaviour ahead of the financial crisis. In that period, the series breaks down as an indicator - there was an upward surge, even though the economy was in recession. This is because of a technical factor in the credit market - companies were unable to roll over commercial paper, and so they were forced to borrow against backup credit lines. This meant that there was a forced conversion of some of the stock of commercial paper into bank loans, causing the loans component of non-financial credit to rise, even though overall credit was contracting.

Why C&I Loans Are A Good Indicator


In a healthy capitalist economy, businesses borrow to fund investment, which is the main driver of the economic cycle. Commercial & Industrial Loans are a good indicator of the cycle as they pick up the borrowing trends of small and medium businesses. These companies do not have access to the bond market, and so they need bank financing.

But C&I loans is not a perfect indicator, as it does not capture all business lending. Thus a change of mix of borrowing can hit the data - the episode before the financial crisis providing an example.

But C&I loans appear to have an advantage over wider aggregates of business borrowing. The more comprehensive credit aggregates (assuming they capture shadow banking system lending) are heavily driven by the borrowing of large corporations. In the modern environment, those large corporations mainly borrow to buy back their equity. This means that aggregate business borrowing turns into an indicator of the willingness of top management to trash their balance sheets in order to enhance their equity-linked compensation. Although this behaviour may be linked to stock market performance, it tells us almost nothing about the economy.


Problems in the international economy provide plenty of potential catalysts for a widespread economic slowdown. High energy prices are acting as a tax on already weak final consumer demand. And much of the U.S. cyclical data has been relatively weak, which reflects a previous slowdown in job creation. Nonetheless, the tendency for capitalist economies is to expand - at least until something has gone seriously wrong with fixed investment. I currently do not see the catalyst for such an episode (assuming that the international economy holds together). There is a fair amount of inertia in business plans, which we see in this lending data, as well as the jobs data. That inertia may allow the U.S. economy to muddle through yet another patch of weak data.

Email ThisBlogThis!Share to TwitterShare to FacebookShare to Pinterest
Labels: Business Cycle, Data, US