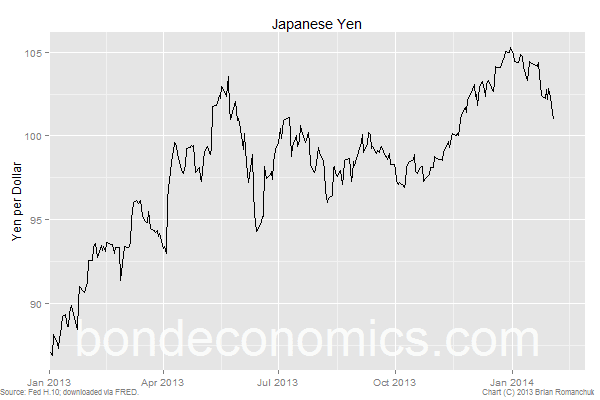 In a previous post I asked: "Abenomics: Lift-Off or Faceplant?". Well, Mr. Market is hinting that "Faceplant" is the answer we were looking for...

Risk assets have been smashed across the board once again today, and Treasury yields are grinding in, laughing at all the year-end yield forecasts that were issued all of one month ago. The ISM data was bad, on top of grumblings out of China, so there is grounds for today's market action on fundamental grounds. (And the fact that I wrote an article extolling long-term stock returns about a month ago is somewhat painful. In my defence, I did say I was discussing a 30-year horizon, and I also underlined that stock returns were uncertain.)

The chart above shows what I feel is one of the more significant moves amongst the various markets: the strengthening of the yen. (Reminder: the chart shows the number of yen per U.S. dollar; as the line goes lower, it implies a stronger yen, since you need less yen to buy $1.) It has not strengthened much, but the key is that the rout of 2013 now appears to be over, and the yen is at least in a trading range.


In other words, there's not a whole lot of momentum behind Abenomics at this point.

There was a lot of belief that the QE would help weaken the yen, but that relies on voodoo economics. Changing the maturity structure of government liabilities has no visible effect on macro variables. (Deposits at the Bank of Japan are government liabilities with an overnight maturity; QE just exchanges bonds for these liabilities.) It may be that some forex traders were sucked in by some Gold Standard monetary operations logic, but I doubt that their belief would be enough to move the yen.

The driver for the yen is not QE, rather it is the fortunes of risk assets. The strong correlation between the Japanese yen and the U.S. equity market has been attracting some attention (the yen strengthens as the S&P 500 falls, and vice-versa). This correlation sounds mysterious and crazy - until you think about it. The Japanese private sector has massive positions in foreign currency assets (the fruits of decades of a current account surplus, and assets compounding in a bull market). The primary driver of the yen is their preference for holding risky foreign assets versus safe yen assets. Any market maker in the yen who hopes to remain employed is going to have to move the currency quote along with what is happening in those risk markets.

Although things are looking ugly, it appears too early to completely write off "Abenomics" at this point. The current weakness in risk markets could reverse at any time; the world is filled with investors who are desperate to hit long-term return targets. These investors know that only equities have at least a mathematical chance of hitting those targets. If the tide of sentiment turns yet again, the weight of capital flows could drag down the yen once again. That said, it seems likely that any yen weakness will be more tentative than we saw last year.