Currency Moves: Not That Big A Deal (Canadian Edition) 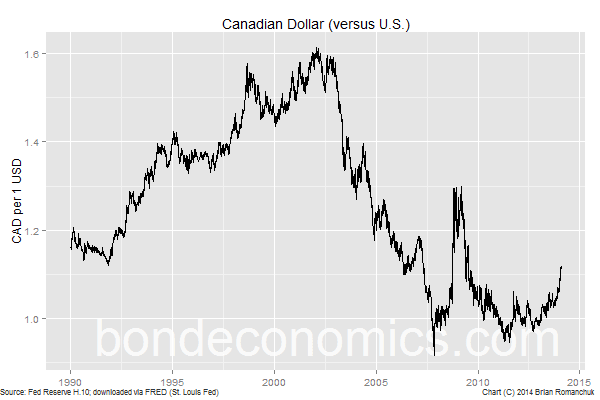 The Canadian dollar ("CAD") has weakened at a relatively rapid pace recently. Although this may have some limited impact on the Canadian bond market, it will probably not be that large, even if the CAD carnage continues. (This currency move may be more important for other, lesser, markets like equities.) I explain why I believe this in this article.

One first point to note is that currency changes matter a lot for bond investors that do not hedge out the currency risk. My guess is that most retail investors will be in that category. For example, if you are a Canadian, and bought U.S. bond ETF's, you would have had some decent capital gains over the past couple of months as a result of the weaker currency. (Reminder: the chart above shows the amount of CAD needed to buy 1 U.S. dollar (USD). A larger number means a weaker currency.) From the point of view of most institutional investors, this currency translation effect is not considered when thinking about bond returns. There is the "Separation of Church and State" for the management of most developed market bond portfolios - one group takes forex risk, and another takes the interest rate risk. I follow the convention of separating the two concepts, and I am only referring here to the interest rate effects.

With that out of the way, the question is: will the currency move affect bond yields?  My answer is that there is an effect, but not too large.

The main effect that I see of the weaker Canadian dollar is the stimulative effect on the export sector. This is important, but my gut reaction is that the move so far has not been big enough for this really to show up. It will be helpful, but the overall level of global activity, and the fate of the Canadian housing market, are much more important for determining the direction of the Canadian economy. The weaker currency just tells us about Canada's market share within global trade, but does not tell us whether the level of global trade will be expanding or contracting.

The second channel is via inflation. On the whole, I think this is not that big a deal. If you had a fancy econometric model, you would be able to state something like:

The weaker Canadian dollar over the past N months will raise CPI inflation by x% over the next two years, all else equal.

Not having built such a model (for reasons to be explained shortly), I do not have a firm estimate of x, but based on past experience, it should be in the range 0.3-0.8% (at most); some models might put the effect at 0 (i.e., not statistically significant).

However, a better translation from mathematics-ese to English would be:


The weaker Canadian dollar over the past N months will raise CPI inflation by x% over the next two years, assuming that the weakness of the Canadian dollar does not reflect factors that will affect inflation.

Whoops. From where I sit, it looks like the weakness in CAD follows from expectations of a weaker Canadian economy. (A currency quote is a relative price; it could theoretically reflect the U.S. being relatively more attractive. I do not think that is the best interpretation right now.) Inflation will be depressed by a weaker economy. As a result, any inflationary impulses from the weaker dollar will probably just be attenuating the deflationary effects of slower growth. (As a result of this ambiguity, building the fancy econometric model seems like a waste of time to me.)

However, it seems likely that the weaker dollar makes it less likely that the Bank of Canada would cut rates in response to a weaker economy. Although they have abandoned the once popular "Monetary Conditions Index" (which was a combination of the policy rate and currency changes), it probably is at the back of their minds. Even raising inflation by 0.5% would be enough to keep inflation from falling below the bottom end of their 1%-3% target band (it is around 1% now).

Limited Passthrough From The Currency To Domestic Inflation

My impression is that most people think that currency weakness would have much more of an inflationary impact. The rest of this article shows how the limited the passthrough is for the Canadian economy. (Other developed markets would show a similar story.) 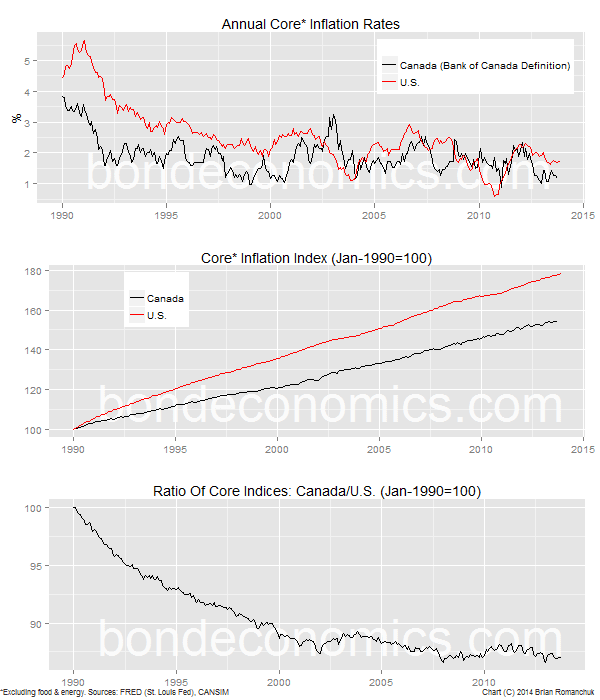 The top panel shows the core (ex-food, ex-energy) CPI inflation rates* for Canada and the U.S. since 1990. This date choice was deliberate; shortly thereafter Canada moved to an inflation-targeting regime, and the U.S. followed similar policies. At the beginning of the 1990's, Canadian inflation was lower, partly (or mainly) as the result of austerity policies. In recent years, inflation rates have been similar.

The second panel shows the indices in level terms, and the bottom, the ratio of the two indices. The ratio clearly shows the two regimes of relative performance. (The Canadian index fell systematically versus the U.S. until about 2002, since which time the ratio has been relatively stable.)

However, please take a glance back at the chart at the top of the article, and look at the scale on the y-axis. The exchange oscillated wildly over the period from 1990 to present. In the chart below, I show the two indices translated into Canadian dollar terms. 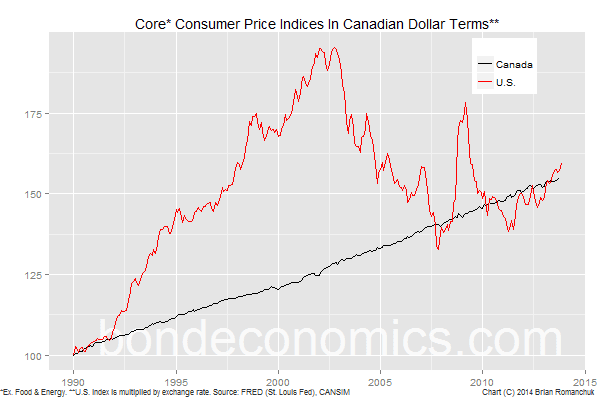 What we see is that the U.S. price index, if translated into CAD terms, had huge swings relative to the Canadian price index. In other words, if you used U.S. prices as a benchmark, you would have expected Canada to have massive bouts of inflation and deflation. (Given the relative size and trade weights for these countries, the inference the other way would not make much sense.) Instead, what we saw is that inflation stuck near where their respective policy makers wanted it to be, ignoring what the currency did. And this is not because the two economies are independent; Canadian commerce is heavily weighted towards North-South trade with the U.S. (For example, it is nearly impossible to buy wine from next-door Ontario within Québec, but you can get American wines.)

This insulation of consumer prices comes about because the biggest business expense is wages, and these are denominated in the local currency. Services are notoriously non-traded. On the consumer goods side, there are layers of intermediaries between production and the store shelves. Currency moves just cut into someone's profit margins, and it may be overseas suppliers who have to adjust.

Prices for goods and services for business use are more affected by currency changes, as they are directly exposed to foreign competition. However, central banks target the CPI, not the Producer Price Index.


For those of you interested, my comments about profit margins should tell you that the currency matters for equities. A weaker Canadian dollar will help Canadian exporters (mainly natural resources). Higher profits will raise business sector incomes, hence GDP. However, those profits are partly accrued to foreign owners, and it seems likely that most of the profits end up being saved. As a result, you do not see a huge immediate impact on domestic consumption due to currency shifts.  (As an extreme example, the nominal GDP of a country like Saudi Arabia would swing wildly in response to oil price shifts, since there's not a whole lot else going on there. However, consumption is smoothed, and so nominal GDP decouples from domestic demand.)

Nonetheless, the increasing relative attractiveness of local equities as the currency falls is probably the main equilibrating force in the forex market, and explains why the developed country currencies generally do not face the extreme panics seen in emerging market forex. (Of course, the lack of currency pegs helps.)

* One of the stranger pieces of disinformation floating around on the internet is that the Government does not include food and energy in the Consumer Price Index. Actually, the official number ("headline") includes food & energy, and the statistical agencies warn about the dangers of the use of sub-indices like the core CPI. It is us private sector analysts that strip out food and energy prices to see the underlying trend, not the government.