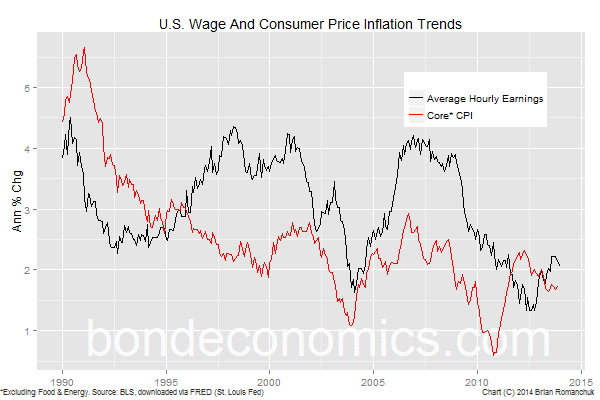 This article is an update on the labour markets in Canada and the United States, as well as some quick comments on other developed countries. Lots of charts.


I will begin by referencing an article by Matthew Boesler, "Goldman Sachs Chief Economist Jan Hatzius Argues The Fed Should Target Wage Growth Instead Of Inflation". As the title of the article indicates, the economists Sven Jari Stehn and Jan Hatzius of Goldman Sachs (Hatzius is the Chief Economist there), argue that it would make sense for the Fed to target wage inflation, and not consumer price inflation. (The preferred measure of inflation of the Fed is the deflator for Personal Consumption Expenditures (PCE); I stick with CPI inflation in the chart above because it is better known.)

To very quickly summarise their argument - using wage inflation eliminates the need to incorporate the Unemployment Rate into the Fed's "reaction function", and it is better-behaved statistically.

I will not attempt to discuss this at length, but my view is that this is what the Fed is effectively doing, it's just that it is bad politics for them to say that they are targeting wage inflation.

Saying that they are targeting wages implies that they are not neutral in the conflict between labour and capital. The usual worry for central bankers is that the Unemployment Rate will be "too low", and wages will rise. This then feeds into consumer price inflation. The chart at the top of the article shows the close relationship for these two variables.

Consumer price inflation in most of the developed economies is driven by domestic wages (the largest business expenditure). This is why currency moves have a limited impact on CPI inflation. There are exceptions, but these are usually smaller countries. For example, Iceland imports a great deal of consumer goods, and the collapse in the Krona meant that there was high CPI Inflation even though the domestic economy imploded during the crisis. However, in the absence of a currency peg, the central bank can do little about import prices.

Therefore, it is no accident that at the time of writing, I have more articles tagged "Labour Market", than those tagged "Inflation". The ultimate driver for inflation is the labour market, and so it is necessary to know how it is trending. 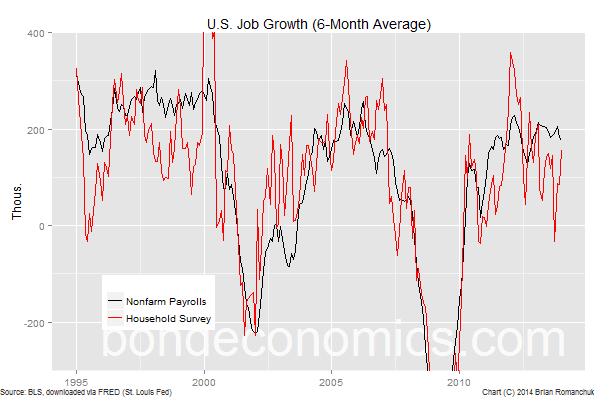 The latest excitement in the U.S. labour market was the two consecutive weak Nonfarm Payrolls numbers ("prints" in trader-speak) - which is a component of the Establishment Survey. However, the Household Survey data was not as weak. The chart above shows the six-month moving average of the number of jobs created per month on these two measures. The Household measure showed a slower pace of job gains throughout 2013. This gap could be explained by more people holding down multiple part-time jobs. (The Household Survey counts the number of people with one or more jobs; the Establishment Survey counts the number of jobs.)

The number of jobs created per month is useful as an answer to trivia questions; the real thing that matters is the amount of job growth relative to the number of people looking for work. For this reason, I prefer the Household Survey, as it is based on percentages of the population. Unfortunately, the fall in the Participation Rate leaves the outlook murky. It will take time to get a better grasp of the true state of the labour market.

However, market participants want to react before the data makes the economic outcome obvious. I.e., they would like to find leading indicators for the economy. At this point, I do not have a magic leading indicator to follow. However, I can comment on why some indicators have become less effective in recent years. 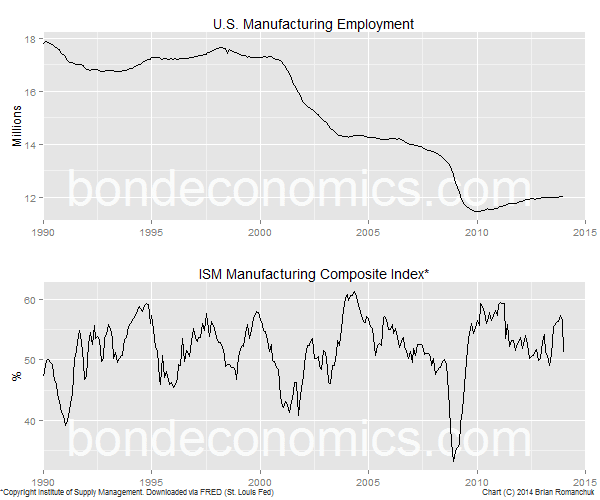 The top panel of the chart above shows the decline of manufacturing employment in the United States. Manufacturing jobs have been the victims of automation and outsourcing. However, most of the job losses occurred during recessions; we are seeing a relatively small recovery during this expansion. The bottom panel shows the Institute of Supply Management (ISM) composite Purchasing Manager's Index for manufacturing. It was historically one of the best indicators for tracking the manufacturing cycle, and determining the trend in bond yields. However, anyone who used the ISM within a regression model for explaining bond yields in 2010 was in for a shock. The index hit a high level, but bond yields did not correspondingly rise.

The problem for the ISM is that the decline of manufacturing employment has marginalised its importance. Not enough manufacturing jobs are being created to "move the needle" for aggregate job growth, regardless of the level of the ISM. The economy needs strong job growth in the sectors that are large employers, mainly in the service sectors. The problem is that there are less reliable indicators for service sector growth. 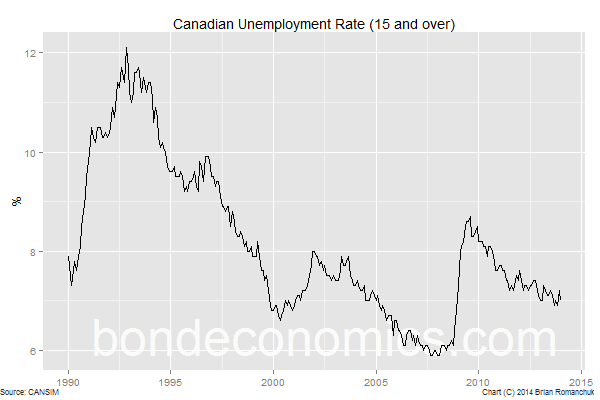 The Canadian Labour Force Survey bounced back in January from a very weak December.This is not unusual; these data are volatile. Looking at the longer-term trend, however, shows that the labour market has stopped improving. The unemployment rate (for ages 15+) was at 7.0% in January 2014; exactly where it was in January 2013. The downtrend in the Unemployment Rate would have to resume to get the Bank of Canada back into play again. 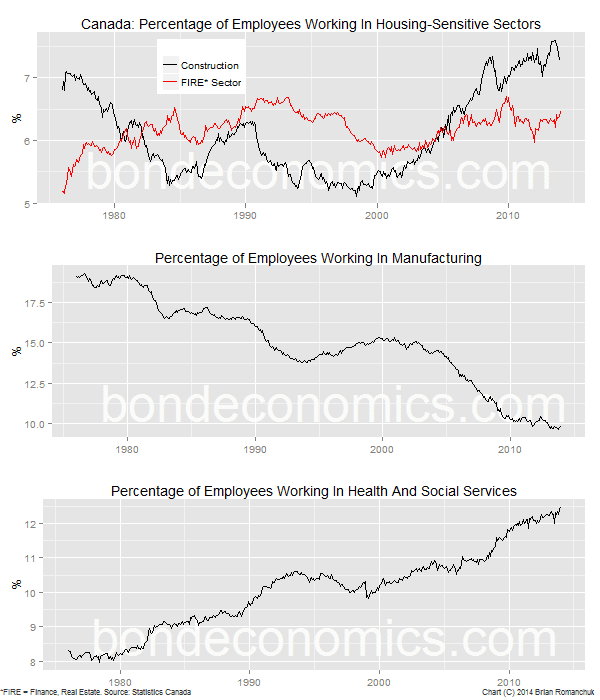 On a sectoral basis, the surge in Construction employment has slowed. However, there is a very large pipeline of condo projects, so the overall number of employees in that sector remains high. The fate of construction is extremely important for the Canadian labour market outlook.


Overall, the labour market still has significant excess capacity available in most areas and what growth there is is not making any major inroads into the idle pools of labour.

I find that his blog (the "billy blog") provides the best analysis available for the Australian economy. Although I would like to start following Australian data, with his blog available, my priority is to add other data sources first.

U.K./Euro Area These are regions where I need to get my hands on data. I find that the interpretation of news in these regions is particularly driven by politics, and without a good look at the data, it is difficult to put things in context. For example, any sign that growth picks up in the U.K. is treated as a signal that "austerity worked" by supporters of the government; conversely, weak data are treated as a sign that U.K. government policy is a total disaster by its critics. Meanwhile, the situation in the Euro area is complicated by the huge divergence across the region, making it impossible to generalise. 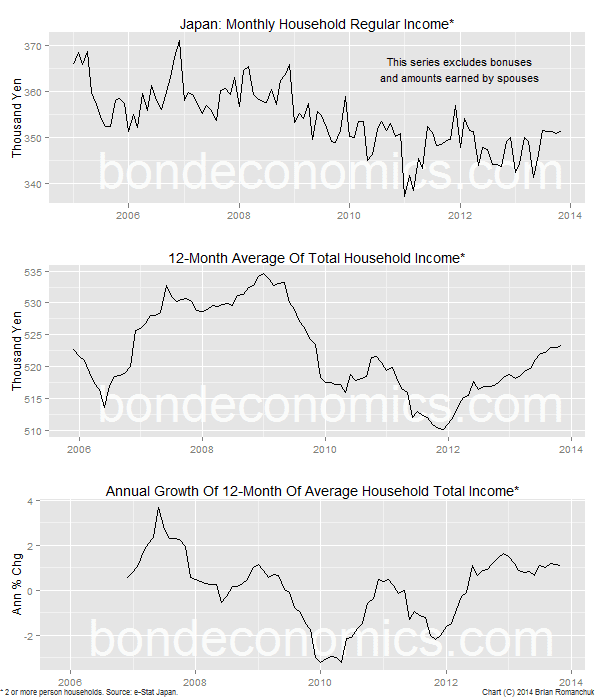 Japan The December 2013 data were good, with the Unemployment Rate dropping to 3.7%. The Japanese labour market is in decent shape, at least relative to the other developed economies. The interesting question is whether "Abenomics" can achieve rising wages, which is one of the government's objectives. So far, it is too early to see any results on that front (the data shown above end at November 2013).

Have a good weekend (and Valentine's Day).