What Is Ricardian Equivalence, And Why It Does Not Hold 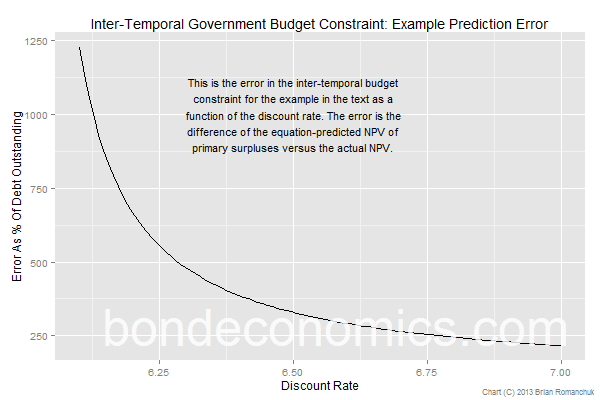 Ricardian Equivalence is a theoretical concept that has been used to argue that fiscal policy is not effective. The argument is that increased government spending implies higher future taxes, so households will increase savings to cancel out the increase in government spending. This concept has been heavily disputed; see this blog entry by Bill Mitchell for an example. He argues that various assumptions are too restrictive in the models that show the “Ricardian Equivalence” effect.

In this article, I will introduce the “inter-temporal governmental budget constraint”, which is the equation which provides the justification for Ricardian Equivalence. I also show why this equation does not hold if term premia are non-zero. The chart above gives an example that shows the error in its prediction about the Net Present Value of future primary surpluses can become arbitrarily large. This has obvious implications for models that incorporate this constraint, as well as the usage of the concept in the analysis of fiscal sustainability.


An Incomplete Version Of The Inter-Temporal Budget Constraint

The incomplete version of the equation is:

As an example of a usage of this incomplete version of the equation, it was used in the Wikipedia entry for “Fiscal Sustainability” (at the time of writing). To be fair, the equation is noted in passing, without details on embedded assumptions.


Equation (1) is often loosely interpreted as meaning that the stock of debt outstanding must be “paid off” by future primary surpluses. This interpretation then leads to a common loose definition of Ricardian Equivalence – if you increase the amount of debt, future taxes will arise to pay back that debt.

This incorrect interpretation would appear to be refuted by the fact that governments roll debt, and so “the debt is never paid back”. However, the equation does not imply that government debt must be reduced to zero; it is equivalent to assuming that the Net Present Value (NPV) of the debt goes to zero as time goes to infinity. In other words, the stock of debt can grow exponentially over time, however the growth rate is less than the discount rate.


The missing term in equation (1) is the effect of seigneurage; which is typically interpreted as the profit the government earns from creating (“printing”) non-interest bearing money or reserves.

The adjusted version of the equation is:


The addition of seigneurage is obviously necessary. Debt can be cancelled with “printed money” without the need for a primary surplus. However, even if the increase in the amount of money is not permanent, the equation needs to be modified.

As an example, assume a rather small government has $100 in debt outstanding, and the 1-year interest rate is 5%. Let us then assume the government buys back the debt with $100 in the form of money. After one year, it runs a primary surplus of $100, which then cancels out the increase in the monetary base. (Since the debt was bought back, the primary surplus equals the overall fiscal surplus.)  The NPV of the sequence of primary surpluses was $100/(1.05) = $95.24. This is less than the initial stock of debt ($100).


Money printing is associated with inflation, as a result of the quantity theory of money. That is beyond the scope of this article. However, the key point to note: seignorage has to be accounted for as it creates a liability with an interest rate less than is assumed in the discount curve used to derive the governmental inter-temporal budget constraint.

Why The Equation Does Not Hold In The Real World


Equation (2) will not hold in the real world. The reason why is hinted in the previous section: interest costs for the government should be expected to be below the path of forward rates generated by the government curve used to discount the NPV of surpluses.

Take as an example a government with $100 debt outstanding in the form of a 1-year debt issue; it pays annually with a rate of 5%. The following set of operations are expected to occur:

The NPV of the series of primary surpluses will equal $100 (the initial amount of debt) if and only if the 2-year annual interest rate used to discount the surplus in year 2 is equal to 5%. This implies that the 2-year term premium has to be equal to zero. (See this article for a definition of the term premium.)

More generally, equation (2) will only hold if the term premium is exactly equal to zero for all maturities. However, there is a very large academic literature - affine term structure models – which is predicated precisely on the fact that term premia are non-zero. In fact, the profitability of borrowing short and lending long (which exploits the term premium), is an empirical regularity that has been known about for centuries. (From the point of view of a bond investor, rolling bonds is expected to generate higher returns than rolling T-Bills over long time horizons.) Meanwhile, governments typically have a large amount of short-dated paper that is repeatedly rolled over. This creates a very large amount of debt that will be rolled at rates below the forwards implied by the discount curve.

The errors introduced by ignoring the term premium are not trivial. Since the growth rates of nominal GDP can be near the discount rate, the specification error in the equation can become arbitrarily large. (Making the  assumption that debt/GDP ratios remain in a constant range. This assumption is a stock-flow norm, and it appears to be a required assumption for capitalist economies.)

Take as a simple example:
How the cash flows work:
The budget constraint equation (2) insists that the NPV of the primary surpluses for all future time would be $100. Instead, increasingly large deficits are run each year. The chart at the beginning of the post shows the magnitude of the error in the “equation”, as a function of the discount rate.

One could argue that I am "cheating" by using a discount rate that is not determined by actual traded instruments (the only bond outstanding has a 1-year maturity). This can be addressed by either:
In any event, some similar extrapolation would have to be done in the real world, as most governments have maximum bond maturities around 30-50 years.

Finally, one could argue that the errors are truly unknown, since we cannot observe the term premium or long-term growth rates. This may be true, but that just implies that the errors in the inter-temporal government budget constraint are unknown but can be arbitrarily large. This makes it entirely useless as an analytical tool.


The standard “inter-temporal governmental budget constraint” does not hold under the real world condition of the term premium being strictly positive, and can generate arbitrarily large errors. However, one could attempt to save the concept by:

Even so, the constraint will still fail as the result of weaknesses in the assumptions regarding the behaviour at infinity. Moreover, even if all of these not very sensible assumptions are imposed on the model in order for the constraint to hold, a welfare state will behave in the opposite manner than is commonly supposed by the usual interpretation of Ricardian Equivalence (hint).  I will discuss these points in one or more follow-up posts.