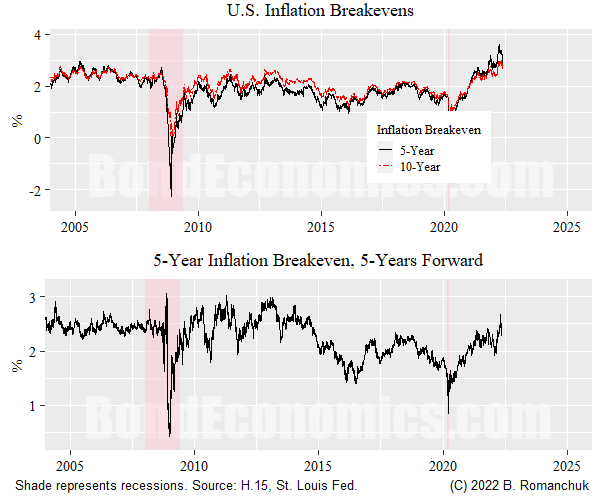 A quick glance at U.S. TIPS (inflation-linked bonds) shows that if we abstract past the thorny question of where inflation will be in the next few years, the market has largely reversed the relatively low inflation expectations that developed in the mid-2010s. If one believes that the inflation overshoot seen in recent years will be reversed within a reasonable time span, valuations are near a “fair value” based on historical data. (Of course, past performance is not indicative of future results, yadda, yadda, yadda.) If one is convinced that the secular tide on inflation has turned, TIPS might still be cheap on a longer-term basis.

The correlation in breakevens means that trades that position for higher/lower breakevens (“directional trades”) will tend to move together. But from the point of view of valuation, we might want to apply a bit more finesse.

We can break up the 10-year breakeven inflation rate into two components:

Conveniently, the 10-year breakeven can be approximated as the average of these two rates.

What Will Happen to Inflation Over the Next Five Years?

From a directional perspective, whether or not inflation is higher or lower than the breakeven inflation rate is the most important question. I do not have a strong opinion on that subject. A recession triggered by the various shocks hitting in 2022 seems to provide the main downside risk to inflation over the next five years. Otherwise, it does seem that it will take time for inflation to cool.

If one violently disagrees with what is priced into the 5-year breakeven inflation rate (either way), that pretty much tells you how you want to position yourself. But, what if one does not hold strong convictions? We can then look at what the market is pricing in on a forward basis.

I am using the data from the Federal Reserve H.15 release, which unfortunately cuts off the history of TIPS data to start in 2004. If we go back to the very early days of the TIPS markets, TIPS breakevens were quite a bit higher (following the example of Canadian Real Return Bonds, which were launched earlier than TIPS). (My first research report that attracted attention was a discussion of how darn cheap TIPS were.)

By 2004, valuations got to what were seen as “sensible” levels, and the 5-year/5-year forward traded in a range around 2.5%. The forward blew up courtesy of the forced unwinds during the Financial Crisis, and then bounced back to the average level. However, years of below (unofficial) target inflation finally led to forward inflation getting close to 1.5%. Afterwards, the pandemic excitement happened. We are now back into the middle of that range.

Since we certainly hope that corporate managements can get their supply chain act together, having inflation revert to its averages of the 1990s to early 2000s is not that implausible. Since we are in the middle of the historical range, one might argue that TIPS do not have a risk premium that they arguably should have priced in. 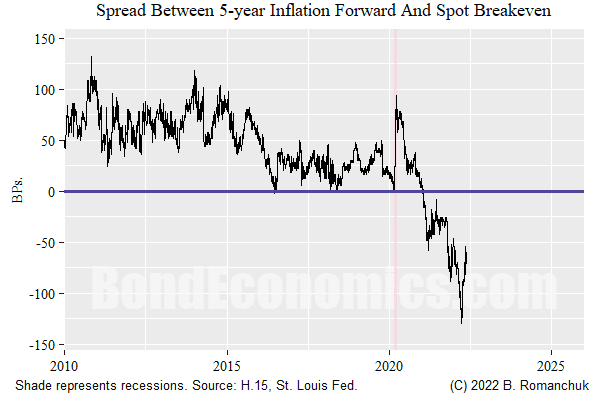 The figure above shows us the spread between the 5-year/5-year forward and 5-year spot, cropped off to 2010 to eliminate the wild spikes that happened around the Financial Crisis.

Although headline inflation did have various jumps before 2020, the 5-year average was relatively stable and so we see that the spot and forward tended to move in parallel. There was a positive slope, which got compressed as the decade wore on. However, once 2020 hit, the spread spiked up to 100 basis points, dropped to -125 basis points, and is now recovering to a more mild negative level.

This demonstrates that the term structure will move around when something interesting is happening to inflation (which was not the case during the 2010s). 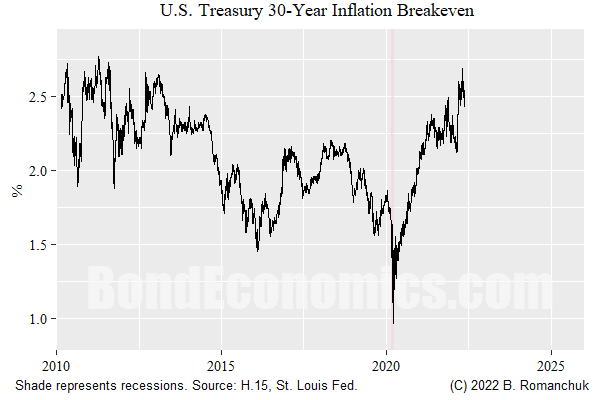 The Fed H.15 data for the 30-year TIPS is even shorter, only starting in 2010. Given the very long maturity date, what happens in the first year is only 1/30th of the total, and so we should expect a more stable level. We are back at the 2.5% level seen in the early 2010s.

I normally do not pay too much attention to the 30-year maturity, as they are largely driven by the whims of liability-driven investors. (Another issue is that I am less sure about the data. The long end of fitted curves can be somewhat misleading with respect to what is happening with the actual traded bonds.) To be on top of that market segment, you need to be plugged in with the various regulatory pressures and investor fads — which I am not.

The valuation on the 30-years are at best mediocre, which is perhaps somewhat surprising given the rhetoric around inflation risks. (Importantly, I must emphasise that this is a relative valuation measure: do we want to own a nominal 30-year Treasury bond, or a 30-year TIPS. If the secular interest rate cycle has indeed turned, both might offer sub-standard returns versus waiting to invest at better levels, or just buying risk assets.)

No Real Yields In This Article!

An astute reader will have noted the complete absence of charts of the real yield on TIPS. Instead, I can discuss valuation — and how it has reverted to past trends — solely via looking at breakeven inflation. I can do this because breakeven inflation is a metric that is tied to a fundamental metric: the average of inflation over the lifetime of the bond. This is analogous to the nominal yield on a Treasury, which has the valuation metric of the average of the overnight risk-free rate over the lifetime of the bond.

Real yields are the residual between those two fundamental rates, and they have done all kinds of wacky things over the recent past — since the residual has no valuation metric of its own. Admittedly, the wackiness of real yields has provided fodder for finance articles, but one of the things one needs to learn is that certain genres of articles need to be filtered out as a waste of time.

(I discuss this point at greater length in my book.)

Email ThisBlogThis!Share to TwitterShare to FacebookShare to Pinterest
Labels: Linkers, US