Central Banks Need To Focus On What They Can Control

As expected, the U.S. headline inflation rate for March was punchy (possibly a short-term peak for the annual rate, at least), although core moderated. I am currently focussed on discussing the inflation experience of 2020-2021, and so I am not reading the entrails of the CPI report for predicting what is happening in the coming months. My view is that inflation is lagging indicator, and such entrail-reading is mainly useful for CPI components that have trend behaviour due to a smoothed construction methodology (e.g., housing). Various economic disruptions could easily move prices either way in the near run.From the perspective of an inflation-targeting central bank, the problem is that most of these short-run effects are outside of their control. Realistically, all they can do is target the medium-term trend, which is likely to result in more rate hikes in North America. (The European outlook is clouded by a more severe energy shock.)

Developed central banks do not attempt to move their currency enough to offset external price changes, on the basis that such a strategy is not feasible. Therefore, they need to worry about domestic conditions, and let the external sector take care of itself. Since governments have largely eschewed price control, about the only control lever is attempting to regulate price pressures via the labour market. 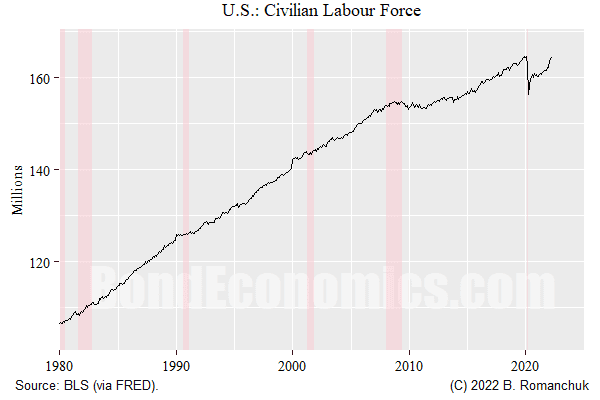 The figure above depicts what I see as one of the unusual factors behind the post-pandemic period — the drop in the civilian labour force in the United States. To be clear, despite the title of my article, this is a variable that the central bank has only a limited ability to influence. However, it generated unusual constraints for policy.

The labour force dropped for a number of reasons: ongoing population ageing (which determines the long-term trend), illnesses and deaths due to COVID-19, difficulties with child care, immigration slowdown, the opioid crisis, and elderly people not wanting to risk illness. I do not currently have a breakdown of the relative importance of these factors, but it is clear that some them have unwound. The question is: once the mechanical bounce is over, what will the trend look like?

Many businesses built their models around workers having no bargaining power, as well relying on hidden costs that are borne by workers (e.g., depreciation of gig economy cars). Such business models are coming under pressure. At some point, such firms will be cut back, either via a recession or business churn. At which point, it is possible that a deflationary bias returns.

Heterodox economists typically emphasise that the percentage of the population in the “labour force” is not the result of some immutable physical law; it depends upon economic conditions. A hot labour market will have the tendency to draw workers back into it. To what extent the central bank can achieve that, they can influence the time series above. That said, I believe that the rapid movements of the level of labour force in 2020 and thereafter was due to the special factors listed above.

Higher rates might cool the housing market, which may also see supply relief if delivery backlogs are cleared, allowing faster completions. Unless policy rates end up closer to 4-5%, I am unsure that they will matter too much for housing activity. There might be a one-time hit to speculative confidence and house prices, but the people who need to buy homes will probably be still in the market.

Many conventional economists might argue that inflation expectations will drop solely because of higher policy rates, and therefore actual inflation will fall (because that’s what the models say!).

The problem with that logic is that nobody in the real world takes those arguments seriously. In practice, household inflation surveys follow gasoline prices. Firms raise prices based on input costs (and whether there is a shortage of their output). Even conventional economists will look at things like NAIRU when answering surveys.

What about speculation? Take a major example — the crypto bros. Internet Austrians are happy to argue that fiat currencies are going to zero because interest rates are too low. Will raising the policy rate fix that? Of course not. They will just pivot to “unsustainable interest spending” as the reason that fiat currencies are going to zero. At this point, nothing is going to stop people from wasting energy solving affinity fraud math puzzles — did going off the Bretton Woods system stop the gold bugs?

It will either take a commodity price crash or a recession to get “inflation expectations” to drop rapidly towards 2%.

The rest of this article consists of comments on topics that are largely outside of central bank control.

There exact state of fiscal policy is jurisdiction-dependent. However, I think it is safe to say that the overall stance is tightening, at least based on the result of passive factors (increasing nominal activity resulting in a greater tax take).

I am not familiar enough with the sources or data to offer strong opinions, but the story that I am seeing is that there was a supply response for truck drivers in the United States. Like the commodity markets, the cure for high prices is high prices.

Another factor that will help logistics is an increase in air travel — since passenger aircraft also ship cargo.

If consumer prices spike past the level of income growth, households either have to draw down savings, or cut the volume of spending. To what extent volumes adjust, logistical woes within North America will be reduced on that side as well.

The COVID lockdowns in China creates two offsetting forces. China’s domestic demand is throttled, which might open up some capacity in strained global commodity markets. Going the other way, shipment volumes out of various Chinese ports are being crippled, and so we can expect another wave of supply woes.

As for longer-term issues raised by these shambolic lockdown policies, I am not the person to ask. My uneducated guess is that there might be some balance shifts within domestic Chinese political factions. It also will raise concerns about the reliability of Chinese sources (including the entire logistical chain, like strained ports in California), pushing towards supply chain diversification.

The Russians appear to be regrouping to launch a renewed offensive ahead of the politically sensitive May 9 holiday. It appears likely that this renewed offensive would result in the high water mark for territorial gains for Russia in the South and East for this phase of the war, and so it would be natural to expect a pivot towards a cease fire on the Russian side.

Although it was fairly clear that the thrust by elite Russian units towards Kyiv was doomed, the outcome of the conflict in the South and East is less clear. Although the Ukrainians have put Russian logistical chains under pressure, it is less clear how successful the Russian attempts to do the same. This information disparity is due to the fact that the Ukrainians have much better control of the flow of information coming out of the battlefields.

The main economic issues in the near run are the build up of Russian energy inventories, as well the effect of the war on shipping in the Black Sea. Even if fighting winds down, it seems unclear when the Russian naval blockade of Ukraine will be lifted.

In the longer term, it seems very likely that relations between Russia and Belarus will be frosty with the neighbours on their Western borders, even if other NATO countries elect politicians that are friendlier to the Kremlin. This is likely to have the effect of casting Russia into the role of supplying China with commodities, with associated monetary flows.