This article was triggered by some discussions I ran into on Twitter. My belief is that the economics literature on banking (with some exceptions) is a failure. From the perspective of advancing knowledge, the best course of action would be to ritually burn the literature, and start over from scratch.

(Note: due to the length of this discussion, I am breaking it into (at least) two parts. This first part gives an overview, then turns to the analysis of individual banks.)

The core of the problem is that the economics fraternity started from the wrong place, and the incorrect description of banking was enshrined in Economics 101 textbooks. The heterodox literature then responded to the incorrect theory, which then has the unfortunate effect of making the whole discussion even harder to understand.

We do not teach students about the dynamics of planetary motion by debunking astrology. Instead, teachers start at the correct place (Newtonian mechanics), then add complexity as needed (relativistic corrections, etc.).

Since some people might be upset by the idea of burning the entire economics literature with respect to banking, I will immediately note some exceptions.

How Do We Do It Right?

The bullet points above are guide on how to look at banking without getting into the swamp of the existing failed literature. Eric Tymoigne’s series on money and banking is one source that I would point to, although I assume that there are others.

As a Minsky-ite, I should note Hyman Minsky’s writings as another good source. However, my feeling is that it might take a fair amount of reading to get a lot of the insights. I found that the most useful parts were where he discussed institutional changes in the financial system. The problem I see is that most readers might not see the relevance of discussions of changes to the money markets in the 1960s to the modern world. The details are not the concern, rather the thinking of the market participants.

We then face two generic topics.

The discussion of topic #1 — how does a bank work? — is complex, particularly if we want to worry about the latest wrinkles in regulations. That said, so long as we are familiar with how levered financial institutions look at the world, we can use a simplified models and understand the basic principle. The generic problem with economists’ descriptions of banks is that they do not grasp how levered financial institutions look at the world. They have learned their Economics 101 models, and they insist on casting everything into that perspective.

The discussion of the financial system is a meatier topic, and arguably open-ended. But there are a few topics that we can hope to get at least some qualitative answers. (This discussion will be deferred to Part II.) The problem is that if we want our discussions to have any real world relevance, we need to accept that the finance is not driven by banks alone. 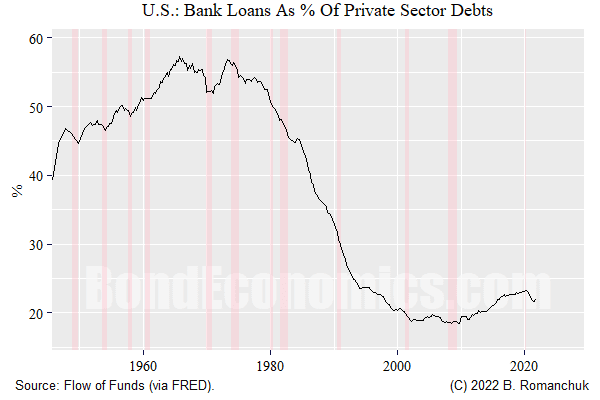 The figure above shows an admittedly exaggerated snapshot of the decline of traditional bank finance in the United States. I used data from the Flow of Funds, and divided loans as an asset on bank balance sheets by the sum of total debts in the non-financial business, financial business, and household sectors (where “debts” = debts securities plus loans). The reason why the decline is exaggerated is that there is a certain amount of double-counting of debt within the financial sector (they issue debts to finance positions in other debts). Nevertheless, the message is clear: balance sheets are definitely not weighted towards traditional bank loans. If we want to understand how the financial system operates in the real world, we need to step beyond models where the only form of debt is bank loans.

This part will now discuss the perspective of an individual bank.

The most important part of understanding banking is understanding balance sheets. The key relationship is that Assets = Liabilities + Equity. The problem many people have is sorting out which side of a balance sheet items are on. The apparent cause of this is that people are thinking of banks from the perspective of bank customers (which they normally are) and not the bank’s perspective.

One way to deal with illiquidity is to hold a buffer of liquid assets that can either be sold or borrowed against. (Borrowing against collateral is preferred since the firm is not exposed to changes in the market value of the asset since it was acquired.) Another is to have a credit line with another entity that has credible liquidity — in the limit, the central bank.

To deal with insolvency risk, the amount of equity on the balance sheet has to be larger than the expected swings in value of the assets. This means that any entity that holds equities has much less scope for leverage (unless lenders are insane, which does happen). Fixed income assets tend to hold their value, so long as they have decent credit quality and interest rate risk is hedged. This means that levered fixed income firms can apply rather impressive levels of leverage (such as relative value funds).

The key takeaway of these observations is that they apply to all levered financial firms. All fixed income managers have to deal with these issues, which makes personnel, risk analysis software, trading ideas, etc. fungible. Each manager will have different parameters (liquidity management at a pension fund has different challenges than banks), but everybody tends to use the same tools (other than explicitly inter-bank or inter-dealer markets).

As a final point of terminology: in finance, we often see the terms finance and fund. They are somewhat interchangeable, and refer to the need to issue liabilities to fund/finance assets (since it is too expensive to issue new equity).

Economists seem to all have read textbooks that emphasise that banks borrow short term and lend long term. The classic example is how the Savings and Loan industry got squeezed by the Volcker madness: they owned long-dated mortgages, but their short-term funding costs went through the roof.

Unfortunately, those textbooks are about two decades out of date. The Savings and Loan experience was a relatively global event, and so interest rate risk management got increasingly sophisticated. The 1994 Orange County blow up — involving interest rate derivatives that apparently nobody knew how to risk manage — was the final nail in the coffin for interest rate risk.

Interest rate risk is the easiest risk to manage (unless you are trading exotic derivatives, which are illiquid for precisely that reason), and the received wisdom among “serious” financial senior management is that government bond yields have been in bubble territory since 1985. Taken together, the result is that banks take very little interest rate risk relative to their other risks.

One may note that the recent losses on bonds in the U.S. dollar are high by historical standards. To the best of my knowledge, there is not a long list of banks announcing major losses as a result of this — which is what one would expect if duration exposures were not hedged.

Well run levered financial institutions in the developed countries treat exposures to each currency separately. Admittedly, banks/borrowers in developing countries do so, which generates periodic financial crises. Nevertheless, one may note the general absence of developed country banks blowing up because of currency moves.

(One objection is the need for currency swaps during the Financial Crisis. The problems were the result of the basis swap market — a funding market — imploding, not the change in currency values. I discuss this further below.)

The advent of credit default swaps has made explicit was previously understood implicitly: a loan or bond by a risky borrower has two components: the credit risk, and the need to fund the loan. If we can remove the credit risk — e.g., by getting a guarantee from a credible party, or buy protection in CDS — the risky loan is effectively a default-risk free loan, or a synthetic government security.

One of the myths promoted by economists (particularly bank economists) is that funding the problem. In reality, funding is driven by circular flows within the financial markets. The problem is taking credit risk. This explains the never-ending quest by investment bankers to repackage credit risk so that it allegedly disappears, and so the positions just need funding trades.

Why Are Banks Different?

Everything I discussed previously represent the generic forces on all levered financial firms. What makes banks special? In practice, banks are special because they provide the core liquidity of financial markets. I will run through what I see as the special roles of banks, in what I see as descending importance.

The next part of this series will discuss the issues raised by the balance sheet expansion caused by bank loan extension. However, that field is filled with reams of nonsense spun out by economists who tell fantastical stories about banks looking at the liquidity impact of extending a single loan.

For a major bank (and not some sleepy credit union that might process a few dozen transactions daily), gross flows through the interbank payments system are massive: often a decent portion of annual GDP in a day. Although banks only have to worry about net flows, they will be large and irregular. For a Canadian bank, the Treasury team is typically a small group sitting in Toronto; they are not involved in discussions with a loan officer in Vancouver that is financing a $2 million dollar crack shack.

Before 2020, Canadian banks were expected to come within a grenade’s throw of a $0 balance with the payments system at the end of day. For pre-QE banks in the United States, they needed to hit their required reserves target with a small excess. If there is a deficit, they has to do something about it — pronto. (The era of excess reserves makes this juggling less exciting.)

Since daily flows are to a certain extent unpredictable, there are two time frames for bank balance sheet management.

I will first discuss the short term: by end of day or within a few day settlement. I will discuss the main generic options to raise liquidity — excess liquidity is gotten rid of by doing the reverse of some of these operations.

Other than the possibility of freezing a large deal (relative to the size of the bank), cutting lending is not a short-term option. Doing so is just a signal that the bank is in very serious trouble, and banks can only get away with it if every other bank is doing the same thing.

In the longer term, banks need to undertake large transactions that require setup time to steer their balance sheet ratios in the desired direction.

The next part discusses the main source of arguments about banks among economists: bank loans and funding. But in order to understand this, we need to understand how financial institutions actually operate (as opposed to how economics textbooks say they operate).

Email ThisBlogThis!Share to TwitterShare to FacebookShare to Pinterest
Labels: Banking