Almost Agreeing With Larry Summers (And Why That's Bad...)

Larry Summers has struck again with yet another missive agonising about inflation risks. What is somewhat interesting about this latest piece is that parts of it could have been written by myself. Unfortunately for Summers, that is not exactly complimentary for his world view, for reasons that I will explain.The passage that caught my eye was as follows.

There have been few, if any, instances in which inflation has been successfully stabilized without recession. Every U.S. economic expansion between the Korean War and Paul A. Volcker’s slaying of inflation after 1979 ended as the Federal Reserve tried to put the brakes on inflation and the economy skidded into recession. Since Volcker’s victory, there have been no major outbreaks of inflation until this year, and so no need for monetary policy to engineer a soft landing of the kind that the Fed hopes for over the next several years.

I have also noted that recessions bring down inflation, which might be seen as obvious. However, there is a bit more to the story. My argument is that we need to ask ourselves: what do we know for sure about inflation? The empirical observation that it normally falls after recessions is one of the key “stylised facts” that we can work with. The problem is that we rapidly run out of stylised facts after that point. As a result, I have a suspicion of elaborate mathematical theories about inflation. 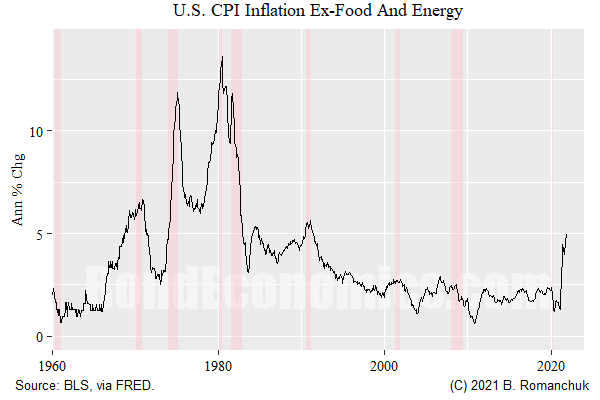 From the perspective of Larry Summers, that is an awkward position. After all, he is one of the standard bearers of neoclassical macro. Surely the decades of DSGE research managed to advance economic theory beyond a stylised fact that jumps out to anyone who looked at a chart of inflation with recession bars (figure above)?

I have been reading about the power of expectations from neoclassicals for a long time. At one extreme, we have economists claiming that the central bank can force nominal GDP to follow a particular path almost entirely relying upon the expectations fairy. There are thousands of turgid articles debating the optimality of various monetary policy rules, such as average inflation targeting. Meanwhile, we have a top professor from Harvard effectively throwing all of that into the waste basket, arguing that we need a recession to lower inflation.

Admittedly, one could argue that my interpretation is a stretch. One angle is that Summers deliberately simplified his arguments — which is necessary for an op ed. The problem is that even I can offer popularised versions of theories without saying the opposite of what I really mean. The other angle is that Larry Summers was angered by being passed over by the Biden administration, and he is just throwing anything he can at the wall and hoping it will stick. Even if we grant this, it is interesting how he has abandoned discussions of expectations.

Another interesting angle to his piece is that he sticks to conventional theory in another place in a way that is not matched by most of the neoclassical commentators (although I ran into one or two exceptions). He argues that real interest rates matter, and so the inflation spike coupled with fixed nominal rates has been impressively stimulative. (His worries about secular stagnation and the policy rate being permanently stuck below r* have left the building.) This is of course what neoclassical models suggest, so one might wonder why this is not remarked upon more widely. The Fed could hike rates by hundreds of basis points, yet the real rate would still be below historical averages.

Although it is common to see the sentiment that the economy will careen out of control as a result of falling real interest rates in financial commentary, it has been rare to see academics discuss this property of neoclassical models — presumably the result of the stability of core inflation since the early 1990s. I have not been paying close attention, but the various estimates of r* blew up in 2020, and sooner or later, some neoclassicals will need to try to come up with a new estimation technique. Those estimates might be interesting, although I suspect that the estimation technique will be chosen to give the desired theoretical outcome.

This leads into my feeling that aggregated macro theory has not been particularly illuminating since the pandemic hit. Most of the interesting work has involved digging into data, and trying to understand why heavily analysed aggregated series are behaving the way they are. Attempting to understand the economy as the result of the optimising decisions of some representative households is not getting one very far. One recent article by the New York Fed about their model forecast offers an example of the issues faced. I only scanned the article, but if we look at the inflation/growth forecasts near the end, we see that the model forecast is for a reversion towards historical means. Although that is not wildly different than my forecast, the reality is that such mean-reverting behaviour is built into the model, and so I do not take much comfort from the model matching my biases.

It looks like this will be my last piece ahead of Christmas. I got hit by some non-COVID minor malady a little while ago, and so I am now catching up on other things. I wish all my readers a happy and safe holidays!

Email ThisBlogThis!Share to TwitterShare to FacebookShare to Pinterest
Labels: Stuff I Read On The Internet