Primer: Seasonal Adjustment And The CPI

Complaints about seasonal adjustment of economic data are another relatively common feature of internet chatter. The complaints are related to the discussion of the previous section {in the manuscript, which is not written yet}, which was the view that economists are messing with the data to promote some agenda. (Since these complaints are often levelled by those of a bearish temperament, the usual complaint is that economic growth is overstated, and/or inflation is understated by seasonal adjustment.)
NOTE: This is an extremely preliminary draft of a section from my inflation primer manuscript.
I do not label these complaints as a “myth” since I am unconvinced that anyone really believes that seasonal adjustment results in lower inflation rates. Rather, my feeling is that this is just exploiting the mistrust of economists and financial market commentators using a concept that is not often encountered.
In this section, I will stick to the seasonal analysis of U.S. headline CPI. Other countries also calculate seasonal adjustment using similar algorithms, and so the qualitative story is the same. The only difference that shows up is that some countries have a less stable seasonal patterns, and the actual pattern differs across countries due to different commercial practices. 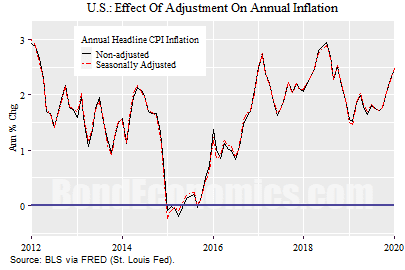 The chart above illustrates a key property of seasonally adjusted data: the annual inflation rate is almost identical to the non-adjusted series. (To repeat, annual inflation refers to taking the percentage change in the index in a month from the same month in the year previously.) I cut down the time frame to 2012 to end of 2019 so that we have a period of relatively stable inflation, which is important for the later charts. Since we are comparing the same month between two different years, the months are in the same season, and so there is no effect. Since most discussion of inflation involves looking at the annual rate of change, using the seasonally adjusted series does not create any distortions to the data. That is, there are no obvious costs to using the seasonally adjusted data – the annual inflation picture is unchanged.
The advantage of seasonal adjustment shows up when we want to dig into data. If we want to see how inflation rates are evolving in the recent past, we do not want to worry about the entire year’s data. Instead, we want to look at rates of change of shorter periods, often 3 months. 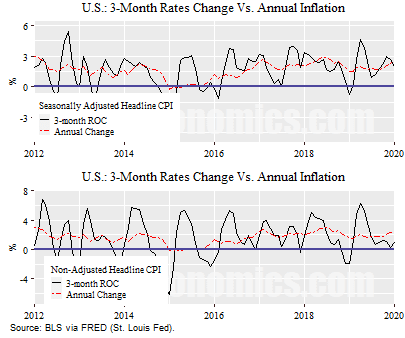 When Not to Use Seasonal Adjustment

Seasonal adjustment is a statistical procedure that works based on making assumptions about the data. Although the procedures typically work well, it is always possible that there could be unusual events that cause distortions in the output. Meanwhile, different people can argue in good faith about the exact procedure.
As such, we must accept that the seasonally adjusted data has been filtered and is no longer the exact same thing as the original data. In cases where the exact level of the CPI matters – mainly when the CPI is used to adjust contracts – users should stick to the unadjusted series. For example, cost-of-living adjustments used by governments will use the unadjusted series.
From the point of view of markets, the indexation factor used in inflation-linked bonds (e.g., TIPS in the United States, Real Return Bonds in Canada, etc.) are unadjusted. That means that the annualised inflation rates can end up being quite high or low in the final months of a bond’s life. For people trading these bonds, this greatly affects price quotes. (I discuss this in my book Breakeven Inflation Analysis.) As such, inflation-linked bond market commentary will often discuss seasonal adjustment issues.

Understanding the Effects of the Adjustment

Explaining the details of seasonal adjustment algorithms is too complex for this book, and in fact is not of utmost importance for our purposes. Unless the reader is attempting to get a job as an analyst, all we need to worry about is the outcome of the process. 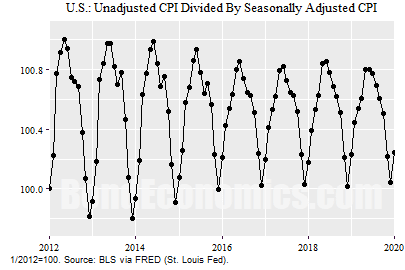 The above chart shows the seasonal pattern for U.S. Since the seasonal adjustment process is based on inferring patterns in the data, other countries will have different patterns. We calculate the pattern by dividing the non-seasonally adjusted series by the seasonally adjusted one. (I multiplied the series by the factor that sets the ratio to 100 in January 2012 – commonly referred to as “rebasing” the series.) If the line rises during a month, it means that the unadjusted data rose more than the adjusted one. The seasonally adjusted series is constructed so that this ratio sticks near its average for the year, but the pattern changes slowly from year to year.
We see that the ratio rises in the early part of the year, peaking around May-June. It then dips, then plunges in the final quarter, with the December level always the lowest. I assume that this represents holiday discounting, but I am uncertain about this.
We can also see that the pattern is not fixed. In the early years of the period, the range of movement is larger than in the later years. This either represents lower seasonal effects in the data – or the data has been more erratic, obscuring the underlying pattern.
In any event, if you want to raise unfounded conspiracy theories about economists lowering the inflation rate by seasonally adjusting data, mark your calendar for the data releases for January to mid-year.

If the reader wishes to know more about this, I recommend going to their national statistical agency. They will usually have information. If not available in your home country, the Bureau of Labor Statistics (BLS) in the United States has a lot of tutorial information (including a FAQ) that should cover the basic principles.
The best way to understand the seasonal pattern is to download the data and look at the ratio of the series in a spreadsheet (or other statistical software).
As for the statistical procedures, it might be in a statistics textbook – but I do not have any that includes that. Instead, I would just download a description of the algorithm I was interested in.
(c) Brian Romanchuk 2021
Posted by Brian Romanchuk at 9:45 AM