Why Money Doesn't Matter That Much

Scott Sumner has continued his discussion of Modern Monetary Theory (MMT) and money. To summarise, he has misunderstood a passage from MMT version of an Economics 101 textbook (Macroeconomics by Mitchell, Wray, and Watts, denoted MWW), and mixing it up with other statements that he has seen. I am assuming that his misunderstanding is the result of leaping ahead to advanced topics, which requires a correspondingly more advanced set of MMT references. I just want to clear the confusion up in this article, without necessarily offering definitive views.

The latest article by Sumner is "Why Money Matters." The core initial problem is his characterisation of MMT's attitude towards money. In this article, he writes:

All of this is ignored by MMTers. They seem to think that swapping cash for bonds is “irrelevant”, even when interest rates are positive.

This assertion is based on the following quotation from MWW (page 342):

Note how this is a statement about a theory of inflation, and not a statement to the effect that open market operations (central bank buying of bonds, as seen in Quantitative Easing) have no effect on anything. The word "irrelevant" has been stripped out of context. If we jump ahead to pages 556 of MWW, we see the standard MMT story: bonds are issued to drain reserves. This is done to allow the interest rate target to be hit, and is a standard MMT story.
I am willing to accept that the quoted passage might have logic that is hard to follow, but it makes sense in the context of later content of the book. On page 362, MWW state "However, by the mid-1980s they had all discovered that they were unable to control the money supply, and abandoned this major plank of Monetarist thinking." The story is the the stock of money (the delta M in the quote) is determined by private sector preferences, and does not tell us much about inflation.
I wrote about this in my previous post, citing more advanced literature that argues that the interest rate constraint was binding, even during the Volcker experiment. They even quote Volcker to that effect.
On the one hand, we have Scott Sumner arguing that the Fed controlled the monetary base without any reference to interest rates. On the other hand, we have MMT scholars as well as Paul Volcker pointing out that there was an interest rate constraint. I view Volcker as a better source than Sumner in this instance.
As for the positive interest rate assertion, there are two cases:
In the first case, to what extent the hypothetical reserve injection matters, it depends upon the effect of 0% interest rates.
There is also the corner case where the Fed injects reserves in such a fashion that it avoids the Fed Funds "going to infinity" (realistically, forcing banks to the discount window) or 0%. As I showed in the chart, excess reserves as a percentage of all reserves were normally small in the pre-2008 era, and so it is unclear how wide the band of reserve injections is. The usual argument is to throw out this corner case, and treat any amount of excess reserves driving Fed Funds to 0%. Although this might be an interesting hypothetical question, there is no way of ever testing it.
Obviously, Monetarists might object to the MMT logic, but they are free to read the appropriate literature -- which consists of monographs/journal articles, and not just an Economics 101 analogue. This is exactly the standard neoclassicals make when faced with the deluge of complaints from the heterodox-aligned.
In the current article, Sumner makes a veiled attack on commenters on his website -- which includes myself.

It would be nice if commenters showed they understood the traditional view, and then explained why it’s wrong and MMT is right.

Very simply, I (and other academic MMT proponents) understand the classical, neoclassical, and heterodox MMT views on the matter, whereas Sumner is still trying to understand the MMT/heterodox position -- and mis-characterising it -- so he is not a strong position to throw shade.

QE With Interest On Reserves

In either of the two frameworks discussed above, bond buying by the central bank that creates excess reserves involves the private sector swapping risk-free bonds versus settlement balances. If the bond is short-term, the interest rate on the bond is roughly equal to the policy rate -- modulo spread-specific technicals that only a handful of specialists care about. (From a bond manager perspective, multiply the spread by the duration/DV01, and the net result is a nothingburger.)
(There is a special case I am ignoring here -- qualitative easing. That is, the central bank buying risky assets. I leave that discussion to people who care about risk assets; I'm a default-remote kind of analyst.)
I will grab a couple paragraphs from Sumner's argument. Since I have seen a few thousand variations of this argument posted in financial social media since 2010, I will assume the reader is also familiar with them.

Monetary stimulus boosts the prices of T-bills, stocks, commodities, real estate and foreign exchange. I.e., it depreciates a currency. During normal times such as the 1990s, the difference between Keynesians and monetarists is just a theoretical curiosity. They both agree that monetary policy drives NGDP; they merely differ in how they see the transmission mechanism.
When rates fall to zero, however, the monetarist model is clearly superior. In March 2009, the Fed announced a QE program and as a result stocks rose and the dollar sharply depreciated against foreign currencies. That’s consistent with the monetarist model and inconsistent with the (extreme) old Keynesian view that monetary injections don’t matter at zero rates. (In fairness, New Keynesians have a more nuanced view.) MMTers seem to think money never matters, even at positive interest rates, although as I pointed out in this post it’s hard to be sure, as their statements are so contradictory.

I will admit that I am not an expert on archaic interest rate determination theories -- for the same reason I didn't study phlogiston in my Thermodynamics class.
If we look at any modern mathematical finance treatment, as well as the recent neoclassical literature, observed interest rates are decomposed into a number of factors. The simplest version is rate expectations + the term premium. Although many post-Keynesians have a bug up their posterior about rates expectations -- too close to efficient markets -- MMT does not follow that lead. There might be hand-waving about market efficiency, but there is no doubt that bond yields are a policy variable (intermediated by the central bank reaction function).
Anyone with an understanding of the modern literature would phrase the issue as follows: does the change in private sector balance sheets affect the term premium? I will not offer an honest opinion, since my blog would probably lose it's Family Friendly™ status.
If anyone paid attention to the actual debates by competent interest rate analysts, the story about QE in the past decade was a signalling effect. Even if the purchases did not directly change the term premium, they offered a signal about the timeline to the first rate hike. (Negative rates were not seen as an option in the U.S.) As such, rate expectations can explain a fall in bond yields, even the term premium is unaffected. This means that falling bond yields cannot be used as evidence that QE lowered the term premium; the Fed could have achieved the exact same outcome with open mouth operations ("forward guidance" in central bank speak).
Very simply, we need some actual statistical evidence of an effect of balance sheet size, and the evidence is mixed (in the most polite phrasing).
In any event, MMT is in-line with modern interest rate theories, which explains why it there are fans of MMT across the risk-free rate trading complex. If you want to argue that fixed income quants do not understand interest rates, I am here with the 🍿 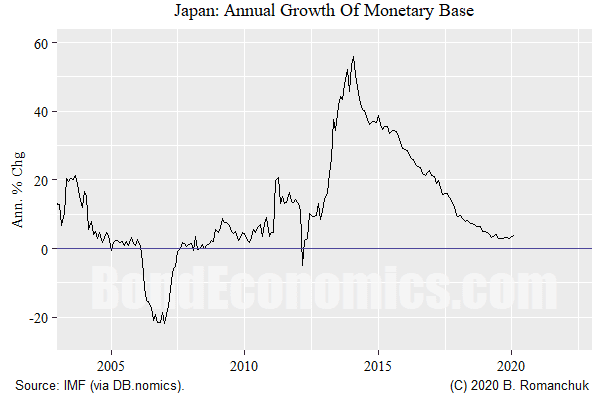 For a non-dual Y-axis chart that shows difficulties with the "money matters" thesis, the above chart is all one needs to look at. (I grabbed the first time series I could get off DB.nomics, and I don't claim it is necessarily the most conclusive version.)

Finally, I think my survey of this topic would not be complete without, citing the contribution of SNFU to this topic. (Warning: SNFU might not qualify as Family Friendly™.)
(c) Brian Romanchuk 2020
Posted by Brian Romanchuk at 3:22 PM