Scott Sumner asked a few questions about Modern Monetary Theory (MMT) (link), and this article is a short response to some of them. The issue at hand is the effect of open market operations, in particular, in the pre-2008 U.S. system (where reserves paid not interest).

Sumner had looked at the text Macroeconomics by Mitchell, Wray, and Watts, and had some concerns.
Sumner writes:

2. The second paragraph seems to apply to all open market purchases, not just those that occur when market interest rates equal the interest rate on excess reserves (IOER). That’s clear from the rest of the book, which focuses heavily on historical examples from the 1960s, 1970s and 1980s. So for the rest of the post I’ll consider OMOs that occur in a world where nominal interest rates are positive and there is no IOER, i.e. the pre-2008 world. To be sure, I don’t think their claim is even true in a world with IOER, but it’s at least more defensible in today’s world.
3. Most mainstream economists (including John Maynard Keynes) would not agree with the claim that a purchase of interest-bearing bonds with zero interest base money is “irrelevant”.

He then poses a question about a hypothetical large balance sheet expansion.

OK, so why do MMTers believe that OMOs don’t matter? Suppose we go back to the economy of the 1990s, when risk-free interest rates were often about 5%. Assume the monetary base is $500 billion (as in 1998). Now consider this thought experiment. The Fed buys another $500 billion in Treasury bonds, paid for with zero interest base money. Is that action actually “irrelevant” because the sum of base money and publicly held debt doesn’t change?

This is in response to (page 342 of Macroeconomics):

The passage from Macroeconomics does not completely cover this response, so we need to look further into the literature.
The first thing to note that Sumner's assertion "OK, so why do MMTers believe that OMOs don’t matter?" is a misunderstanding of the passage from Macroeconomics. The passage says that the ex post decomposition does not matter for inflation, but it does not say that that open market operations have no effect on anything. Open market operations are related to how the central bank determined the short-term rate of interest in the pre-2008 system -- but the determination process bears little relationship to what Monetarist models say. Open market operations "mattered" to the extent that nominal interest rates matter. (In the post-2008 Fed system, or in places where central banks use a corridor system, open market operations have a very tenuous relationship to interest rates, solely based on very questionable beliefs about supply/demand effects on term premia.)
Returning to the question, the MMT analysis -- which now seems to be accepted by non-Monetarist neoclassicals -- is that the Fed had almost no discretion in setting the amount of reserves in the system (pre-2008). 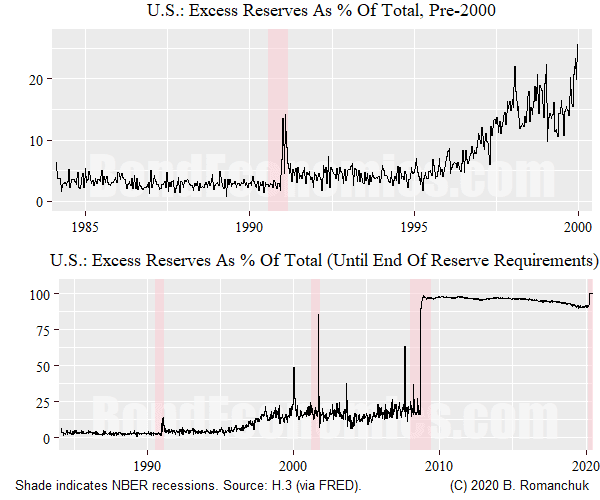 The chart above shows the percentage of reserves that were excess to requirements from 1984-2000 (I truncated data 2000 since the Y2K spike obscured the scale.) We see that excess reserves were generally sub-5% of the total before 1995, with a spike in the early 1990s. After 1995, the percentage drifted higher (with a few spikes), and then the Large Scale Asset Purchases drove them to nearly 100% of the total post-2008.
The Fed's open market desk had almost no day-to-day discretion in setting the level of aggregate reserves. (The modern Monetarist theory has evolved to discussing expectations about the money supply, which is another issue.)
This is of course what happened in 2008, but the addition of paying interest on excess reserves ended the relationship between short-term rates and the size of the Fed's balance sheet. (At most, bond yields could allegedly be lowered by open market purchases.)
I pointed this out in the comments section, but Sumner objected, pointing to the Monetarist experiment under Volcker. However, the MMT literature argues that the Monetarist interpretation of that episode is incorrect.

The MMT argument is straightforward.
Once we look at the above statements, it is not that hard to see that the decomposition between monetary expansion and bond issuance does not matter for inflation. For the pre-2008 Fed, money growth was almost entirely driven by private sector demand. Otherwise, central bank balance sheet expansion is just swapping fungible governmental liabilities, which has tenuous effects on the economy.

Note: I was given a number of references for this discussion on Twitter. @Wonkmonk gave me the Kleisen/Wheelock reference. A few people noted the transcripts, and rather than go through them, I used the Tymoigne reference. Scott Fullwiler wrote "Meulendyke says they were targeting interest rates in her response to Basil Moore 30 years ago in the JPKE" - a reference that I did not have time to track down. Also, Stephanie Kelton offered this reference by Papadimtriou and Wray: http://www.levyinstitute.org/pubs/wp124.pdf.
(c) Brian Romanchuk 2020
Posted by Brian Romanchuk at 3:22 PM