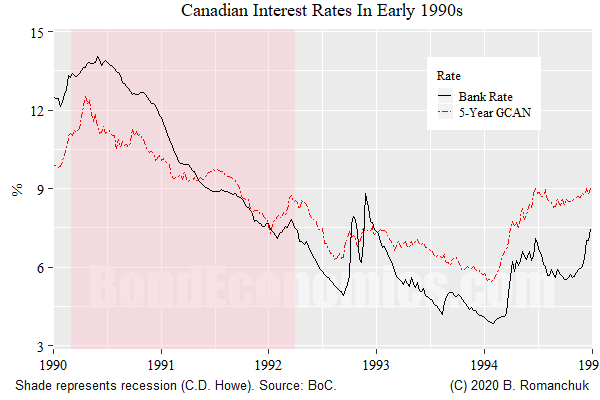 The Canadian Establishment has launched a full-court press against lax fiscal policy of the Trudeau government. It would be only a slight exaggeration to say that they are calling for austerity (at least not immediately), but rumours of policies like Universal Basic Income are causing alarm bells to ring. The Canadian economic establishment is very much wedded to sound finance beliefs, courtesy  of the Great Canadian Fiscal Crisis of the early 1990s.

I was out of the country when the Great Canadian Fiscal Crisis happened, and heard nothing about it. (I was an engineering student enjoying the increase of purchasing power that resulted from the U.K. being vomited out of the ERM.) I only found out about the Great Canadian Fiscal Crisis years later, when I was working with economists (many who were at the Bank of Canada at the time).
I was working for a large investment firm during the Financial Crisis (that peaked in 2008). Not wanting to experience such a crisis is an entirely reasonable view to have. (As a Minsky-ite, I view financial crises as being a great source of intellectual stimulation, so I am not as crisis-averse as others. But I see how extreme crisis-aversion is a reasonable world-view.)
I spent my career staring at time series databases of bond yields for the developed countries. My memory is far from photographic, but I pretty much knew all the major developments in bond yields, slopes, and swap spreads across the developed markets (generally post-1990, where the data started being reliable). For the life of me, I never could find the evidence of The Great Canadian Fiscal Crisis in the charts. The top of this article shows the Bank rate (policy rate), and the 5-year Government of Canada benchmark (Bank of Canada data, Wednesday figures). I can perhaps guess where the fiscal crisis is supposed to lie, but the 5-year did not seem to be moving the way a bond that is being priced for default should be.
Admittedly, I could look up the date for the occurrence of The Great Canadian Fiscal Crisis, but it is frankly hilarious not being able to figure it out from bond data, so I am leaving it as a personal mystery.

As I noted, there has been a barrage of articles in recent days by Canadian fiscal conservatives. I will pick out one, by David Dodge: "Ottawa must tame deficits by boosting future production with borrowed money" (I have a subscription, but I think you can get a free account to view at least some Globe and Mail articles.)
David Dodge was formerly a Governor of the Bank of Canada, and deputy finance minister during the Fiscal Crisis of 199X. He appears to be a quite serious person, so I will try to limit my snide remarks.
This is his take on that fiscal crisis, which he intimates could repeat.

Right now, confidence in Canada is intact. But confidence, as I witnessed firsthand as deputy minister of finance in the 1990s, can evaporate pretty quickly. Suddenly, investors seek greater assurance to cover our debts. That puts downward pressure on the dollar – making both direct investment and consumer goods more expensive – and raises the risk premium on our interest payments, something we can ill-afford. When confidence waned in the mid-1990s, the rising risk premium added $4-billion in interest costs in a single year, squeezing out better spending.

Given that I have severe doubts about any risk premium estimates, I would question the false precision of the $4 billion figure. That said, that is what he and (probably every other member of the Canadian Establishment) believes that number.

Their flipping out was no accident. Even though Canada had a mere four decades of experience with a floating currency, pretty much every country was fooling with pegged currencies relatively recently. Even after the United States threw in the towel on Bretton Woods, various hare-brained schemes to manage currency volatility were implemented (Plaza Accord, etc.). One of the most-followed indicators in the Bank of Canada until the late 1990s was The Monetary Conditions Index (MCI), which was a mixture of the policy rate plus 10% of the change in the Canadian dollar. Given the volatility of the currency, the currency component often contributed more volatility than interest rate changes.

That said, by the late 1990s, discontent with the Monetary Conditions Index was setting in, and the indicator was taken behind the barn and shot. New variants may have appeared (often labelled the Financial Conditions Index, to distance it from past failures), but the currency weighting was greatly reduced (and things like spreads added). The empirical reality that domestic inflation did not budge in response to even large swings in the currency had been accepted.  (Update: Fixed the indicator naming! The burying of the MCI was so complete that I temporarily forgot that is what it was called.)

There are two interpretations to the Canadian Fiscal Crisis.

I leave picking an interpretation as an exercise to the reader.
I return to the Dodge argumentation.

As expected, r and g show up in the article.

A lot of people are asking whether we can manage our ballooning budget deficit. The answer is yes we can, if we act prudently. How so? We need to ensure our growth rate (which determines government revenue) remains higher than interest rates – the critical G-R equation. Interest rates have been running about one percentage point below growth so far this century, and, assuming no sudden loss of confidence, should continue to do so. This is dramatically different from the 1990s, when government borrowing costs exceeded revenue growth by about four percentage points, a negative G-R.

Of course, the possibility that interest rates are a policy variable is ignored. Apparently, he did not set rates when he was Governor.

Dodge argues in favour of a new fiscal rule.

I would suggest that a 10-per-cent debt servicing target should become the federal government’s new fiscal anchor, providing assurance to the marketplace and transparency to voters that the government is tied to the discipline of a fiscal plan over future borrowing, expenditures and revenue.

(Since it is not perhaps clear, the "10-per-cent debt servicing target" means that interest expenditures are less than 10% of the Federal budget. Interestingly enough, I had never seen anyone hyphenate "per-cent". Per cent is used in my Canadian Press style guide, but I am apparently following the American spelling. Oops.)
Given that interest rates follow what the Bank of Canada sets, this makes fiscal policy subordinate to monetary policy. Snugging up interest rates even slightly would force a fiscal tightening in order to meet the 10% rule. Alternatively, austerity policies have to be implemented in order to create room for potential future rate hikes. Why are fiscal policy makers going to have to tighten policy when the economy is weak, on the basis that the central bank might raise rates drastically in the future?

Finally, it is argued that deficits need to be matched to "finance investments" (presumably includes things like PPPs), and they cannot be used to alleviate poverty or counter-act weak aggregate demand.

There is a stipulation, however. For G to remain greater than R over the medium and long term, government borrowing must be primarily used to finance investments that will augment the growth of domestic production and the global competitiveness of Canadian industry – thus shoring up the current account and warding off the penalties of diminished confidence. Following this course will allow us to get the twin deficits under control without resorting to the drastic measures of 25 years ago.

Given that spending is fungible, and one person's programme spending is another person's investment, it is unclear what this means in practice. But it is a pretty clear warning shot at Liberal Party caucus members who are pushing for a Universal Basic Income.

This is about as clear as an anti-MMT piece one could hope for. We see arbitrary rules on fiscal policy, based entirely upon fears about the reaction of bond and currency markets. To be fair, the arguments are self-fulfilling: if the central bank fears the markets, it will cave in and a crisis will ensue.
The question is whether these arguments will survive politically. Justin Trudeau could listen the establishment, and implement an austerity policy as soon as the economy is showing any sign of perkiness. However, the predictable result is that this will lock the economy again in a low-growth trajectory, which did absolute wonders for the legacy of the Obama administration. Even if the Liberal Party is not a fan of MMT (seems likely), austerity policies will get serious pushback once implemented. My guess is that austerity is the path of least resistance for the Liberal Party, but Trudeau has enough of a grasp of the issues that he could do at least a partial end run around the establishment.
(I am in the editing pass of my MMT primer, which discusses the upcoming expansion. I may need to update my text to reflect the reality that the push for austerity has already started, at least here.)
(c) Brian Romanchuk 2020
Posted by Brian Romanchuk at 8:14 PM