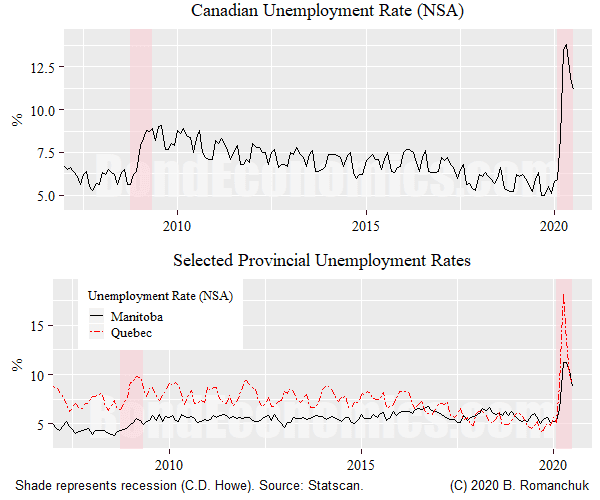 There has been a cabinet shuffle in Canada, with the Finance Minister position moving from Bill Morneau to Chrystia Freeland. Newspaper reports hint at philosophical changes, moving towards a more free-spending strategy. Although the messaging might change, I would lean towards changes in practice being incremental. It is entirely possible that economic differences were played up to move attention away from other political concerns about the old finance minister.

Although supply disruptions might be tied to a bump in the price level, telling a story about sustained price increases -- inflation -- seems awkward, even with looser fiscal policy.

In recent decades, Canada has followed fiscally conservative consensus, although some of the sillier aspects of that were shed earlier. The reality is that the government had to unleash a spending firehouse to keep the economy going just a couple of months ago. It would be a bit lame to come up with some "there is no money" story right now -- why was the money available a few months ago? That said, it could just be that a retreat from a balanced budget orthodoxy is tactical, and howling for fiscal retrenchment will start up once the worst of the pandemic is behind us.

As the chart above indicates, there has been a reasonable bounce in the economy, with the unemployment rate retracing towards the worst period of the Financial Crisis aftermath. Although that does not sound that impressive, we should return to a situation where fiscal deficit levels are near historical precedents.

The bottom panel updates the situation in Quebec and Manitoba -- two provinces that were at the opposite ends of the pandemic case spectrum, and without the complicating factor of oil industry woes. Quebec was a COVID-19 hotspot early, while Manitoba had few cases. The situation in Quebec is not perfect, but there is a return to something resembling normalcy. The only question is how the return to school will work, which is starting over the next two weeks (exact dates depending on the school board). This is showing up in the unemployment rate, which converged to the one in Manitoba. Roughly speaking, what we are seeing now is the new steady state -- operating with various safety protocols in place.

So far, we have not seen the big bump in aggregate prices due to supply chain disruptions that was a legitimate worry. Unlike online stores with flexible prices (e.g., price gouging is accepted), normal retailers just used quantity rationing on most affected items.

However, the recovery has seen some behavioural changes, with the Canadian housing market being a winner (again). For example, in my neck of the woods, there has been a decent number of pools installed, whereas in previous years, the trend was towards existing pools being filled in. (A combination of the lockdown and record heat in June changed the calculus for pool ownership.) We are looking at a bathroom renovation, and the contractor confirmed that materials prices are rising rapidly.

I am dovish on inflation, but one should expect some perky numbers in at least some CPI components as the economy moves toward steady state.

The Federal Government has announced changed to the Employment Insurance (EI) programme (which is an umbrella programme that replaced Unemployment Insurance, as well as other employment-related programmes like training grants). Criteria for getting grants has been loosened, and a $400/week floor has been added, which replaces the earlier ad hoc programmes.

As expected, Bay Street economists are already complaining about this programme. I could very easily have missed something that will have a major side effect on behaviour, but my reading of the changes is they will do what the previous support programmes did -- keep nominal incomes steady for people that have lose employment income.

Replacing employment income is an automatic stabiliser: it just allows the previous pattern of spending to be sustained (avoiding a crisis from the second round effects like debt defaults), but is not going to spur growth directly (although we would expect second-round effects, that is, the multiplier is greater than 1). However, a growing economy will draw people into more hours of work, and so this stimulus is self-limiting.

The fear on Bay Street is that if workers do not face immediate starvation risk, they will demand higher wages to work. I am sure the business press can find anecdotes of this happening. I remain skeptical that these scattered incidents would measurably move the aggregate wage bill.

Another point of discussion is the potential for a green initiative by the Federal Government. I have very little idea of what is being considered, so what follows is guesswork.

If the programme is aimed at infrastructure -- e.g., renewable energy sources, storage -- then the programme will be capital-intensive. However, unless the plan is to build the manufacturing capabilities in Canada, it seems likely that much of the inputs would be imported.

If the Canadian government is buying the same sort of equipment that other countries are buying, this would help drive up the price of said equipment. The government would face a rising "price level" on the basket of goods it is buying.

This fits in with the MMT story of government provisioning. However, it remains to be seen how much of an overlap there is between the renewable energy equipment supply chain and that of the broader economy. Given the weight of services in the CPI, the effect could easily be minimal.

In order to get inflationary risks, the programme would need to bid up the wages of a decent number of workers. This would require the emphasis on requisition being towards domestic labour, not (imported) capital. 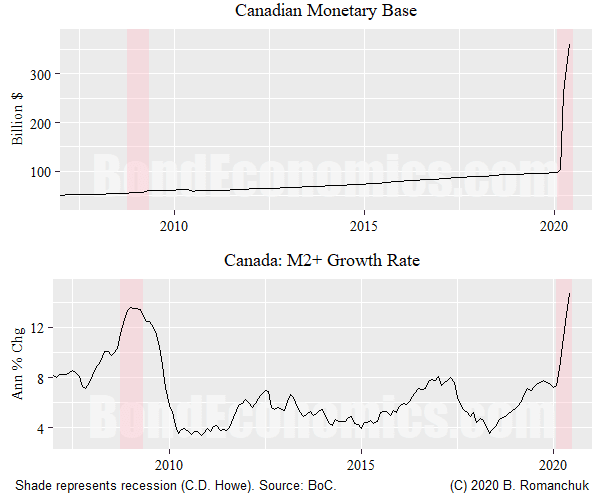 We turn from things that might cause inflationary risks to one that certainly will not -- the monetary shenanigans of the Bank of Canada.

The top panel of the chart shows the Canadian monetary base -- which has taken too sharp a turn to be described as a hockey stick. The BoC previously followed a policy where bank settlement balances ("reserves" in American common discussion) were $0 (within rounding errors), and so the monetary base just consisted of notes in circulation, which grew at a sedate pace, meeting the needs to retail and criminals. Just as in 2008 (there is a bump that is not visible on the chart), the BoC dumped that policy and left private banks with large settlement balances, creating the vertical jump.

The explanation for this is that the BoC was concerned about wholesale funding markets, and so it undertook hefty repo operations -- removing that intermediation from the private sector. This helped avert a crisis, but that does not imply an acceleration in the economy.

The bottom panel shows M2+, which is a broader money measure, shown as an annual rate of change. The change is less extreme, but growth has still hit a recent record.

The reality that the economy is going to be lucky if nominal GDP claws back to a level below the previous trend path. As such, this is yet another reminder that the MV=PQ relationship contains no useful information. Anyone who argues that the changes in M2+ has leading information on the real economy is due for a surprise.

If we do get a couple of decent CPI numbers due to supply chain issues, the inflation bears will be frothing at the mouth. However, something needs to move the aggregate wage bill for price rises to have legs. Loose fiscal policy -- and not the change in the monetary aggregates -- might do the job, at least theoretically. That said, I remain unconvinced that the political consensus has greatly shifted; once unemployment rates are at "acceptable" levels, a move towards fiscal "renormalisation" will be the path of least political resistance.