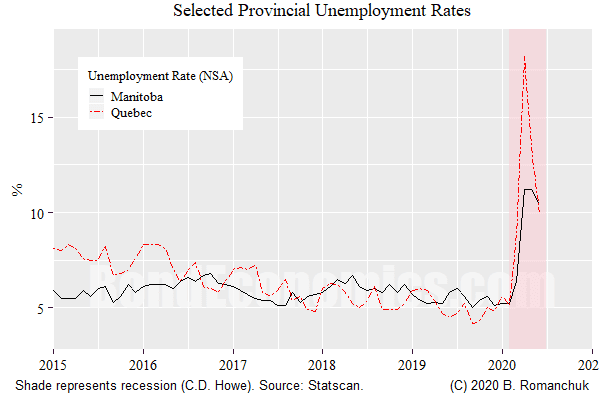 My argument has been that economies would return to a steady state path, with certain industries crippled (e.g., mass tourism), but other industries able to operate. My guess was that Canadian provinces would show some dispersion based on how they handled the containment of the virus. That guess so far was incorrect, as Canadians actual behaviour seems relatively uniform, and the virus appears relatively well contained. Instead, the American states are more likely to show deep divergences (which appears to be a consensus view).

The chart above shows non-seasonally adjusted unemployment rates for Quebec and Manitoba. Although the choice of provinces reflects my background (I grew up in Manitoba, and live in Quebec), they roughly capture the two extremes of the virus experience in Canada: Quebec was hit the hardest, while Manitoba had few cases. Meanwhile, the advantage of Manitoba versus the other prairie provinces is that it is less exposed to the resource industry. (For example, weak oil prices are likely to cause grief for Alberta no matter what happens with the virus.)

The Canadian experience is that the lockdown worked, and measures to eliminate super-spreading incidents were largely successful. Cautious behaviour has kept transmission to low levels. At present, the worry in Quebec is community spread among youngsters who are flocking back to bars and house parties. Other than a fairly likely re-closing of bars, it seems likely that pandemic containment will mainly be an issue of tolerance by citizens. Other industries that can be safely re-opened were re-opened, and the ability to open closed ones seems limited -- unless provinces can get to the eradication level seen in (for example) New Zealand. Some provinces are close to eradication, but that seems unlikely in Quebec. Meanwhile, although the U.S.-Canada border is closed for non-essential travel (as is inter-provincial travel, to a certain extent), no province can feel as secure as New Zealand in its ability to stop infections from visitors.

The issue Canada faces now is that it is unclear what the strategy is. In my view, the only clear option is eradication, as it presents an obvious endpoint. However, the situation south of the border is worrisome, and it cannot be sealed forever. We are stuck in the position of hoping for a vaccine, or medical treatments that can greatly reduce the effects of the disease. I am not a fan of relying on hope as a strategy.

As for the economic strategy, it will be necessary to decide what to do with industries that cannot safely operate. I do not see any options that are politically palatable. It may be that I have been spending too much time writing about MMT recently, but putting workers in shuttered industries into a Job Guarantee programme seems like the fairest option. As for the firms, I lean towards fairly harsh national interest considerations. For example, a national airline is important for internal communications, and even for back-up troop transport. Canadian National Railways was created out of the wreckage of failed private railways. Conversely, given the ease of setting up a new bar, I see no strategic need to keep drinking establishments afloat. The premise of capitalism is that owners take risks in face of fundamental uncertainty; they get the upside if things work out, but should they not face the downside?