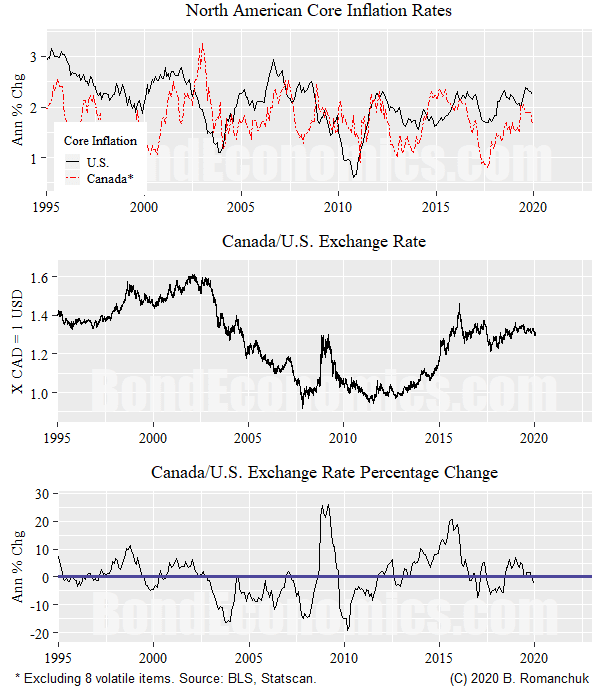 The inflation story in Canada and the United States has not been particularly exciting for some time, and I am not in a position to argue that this will change any time soon. I just want to update a chart that I think is extremely useful when discussing the alleged external constraint on floating currency sovereigns. As seen above, even Canada -- a small floating currency sovereign with a economy highly open to external trade -- has extremely limited passthrough from exchange rate movements to (consumer price) inflation.

The top panel shows two measures of core inflation for Canada (the "excluding 8 volatile items" measure) and the United States (CPI less food and energy). As is well known, extremely flat since 1995, when the various structural changes were made to the economies (including an explicit inflation target in Canada).

Looking at the top panel, there is not a lot to say. One could argue that central banks have done a great job hitting inflation targets (an implicit target in the United States) -- or someone more skeptical of the power of inflation targeting would argue that structural changes to the labour markets and the opening of trade to low-cost developing countries has eliminated pricing power. There are some small movements that appear to be cyclical, but the magnitude is very small when compared to the inflation volatility of earlier eras. In any event, there's not a lot more to say about this, other than raising the possibility that the environment can change (which can obviously happen).

The bottom panels are more interesting -- they show the exchange rate between the Canadian and U.S. dollars. Although Canada is a large trading partner of the United States, we would not expect much of an effect of Canadian dollar movements on U.S. inflation, as the U.S. is a relatively closed economy, and has many other trading partners that manage their currency value versus the USD. However, Canada is an open economy, with extremely large North-South trade flows. (In practice, it can be easier for some firms to send output to the United States than it can be to other Canadian provinces.)

The top panel shows the annual percentage changes in the exchange rate (with a positive number indicating a weakening Canadian dollar or strengthening U.S. dollar). If we look at the period around 2008, we see that the Canadian dollar strengthened considerable before and after the Financial Crisis -- but crashed during the crisis itself.

One may note that the 20% movements in the Canadian dollar had almost no perceptible effect on core Canadian inflation. Wages represent a large part of the domestic cost structure, and they are not indexed to the currency value. Meanwhile, there are large fixed costs in retail (particularly rent) which have to be covered. The fluctuation in import prices is absorbed in someone's profit margins (and to a certain extent, nullified in the short term via currency hedging).

One key distinguishing factor for Canada is its experience with floating exchange rates. Other than an 8 year interruption, the Canadian dollar has floated since 1950. Firms and consumers have learned to adapt to a floating currency, and are not as obsessed with its value. (My observation as an outsider is that this is very different than the United Kingdom, were movements in the pound are seen as having political significance. This seems to be a legacy of a recent memory of a fixed exchange rate, notably the embarrassing ejection from the ERM. That event was viewed as political disaster by the locals, but for those of us living on a Canadian dollar scholarship, it was a great event.)

If one follows the Functional Finance line that the only true constraint on a floating currency sovereign is inflation, the lack of pass-through from the currency value to domestic inflation greatly downgrades the importance of the external sector as a "constraint."