I saw a high profile comment to the effect that the business cycle was abolished recently. Since I will be plugging a book on recessions shortly, that represents a risk to my business plans. I do not wish to go through what exactly was said elsewhere (mainly because I did not go through the details of the argument), but just give my spin on the idea. If we stick enough qualifications into how we express ourselves, it is not that controversial an opinion.

An End to Recessions!


Under current institutional arrangements and policy preferences, the developed countries can have indefinitely long periods of national expansion.

The sneaky trick are the three bolded phrases.

The "can" part of the statement is so-weasel worded that I see no need to pursue it further. But I would underline that if we use some probabilistic phrasing ("the volatility of real GDP growth will be reduced"), things like recessions -- even the Financial Crisis -- could be explained away as a bad die roll. Since most sensible people will stick such qualifiers in their forecasts (the "Great Moderation" proponents did), this is always something to keep in mind.

I will look at the remaining two points.

Since the 1990s, the developed countries followed a similar script for structural changes to the economy (modulo the euro area experiment, which generated corresponding economic outcome outliers in the periphery). The best summary description is "neoliberal reforms," but that term is in the process of losing its meaning in popular discourse. For my purposes here, I have in mind many parallel developments, particular in the Job Market. (In  the book Full Employment Abandoned (Amazon affiliate link), Bill Mitchell and Joan Musken point to the "OECD Jobs Study (1994)" as the common thread in developments in the labour market.) 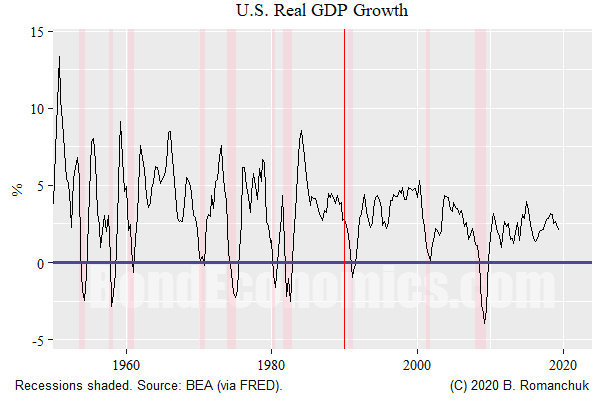 The figure above shows the annual growth rate of real GDP in the United States The vertical red line indicates 1990, which is roughly where we saw the institutional changes happen. Just eyeballing this chart shows that volatility in the growth rate has fallen - particularly if one put's one hand over the data around the 2008-2010 period. Other countries had a similar drop.

Using the terminology favoured by stock-flow consistent modelers, the economy moved to a new steady state around 1990. Economic variables are still changing, but they tend to stick near certain values.

As has been remarked repeatedly, the United States has drifted into a path of lower economic growth since the Financial Crisis. I like to think of this as the "Neoliberal Stasis". This pattern of behaviour is often referred to as a "low pressure economy" by post-Keynesians (as opposed to the "high pressure" economy seen in the early post-war decades).

The first volume of my text on recessions could offer a less shaky explanation, but the analogy offers a pretty good intuition.

Thus we can get to the simplified version of the argument: if policymakers keep the economy at a low pressure state, recessions should be unlikely. This sort-of fits the observed data.

The Financial Crisis can be explained away fairly simply. The transition to a low pressure economy involved a steep reduction in interest rates, and this caused a localised boom in housing markets. Regulators dropped the ball on the implications, and the economy "blew up real good."

So long as regulators stay on the ball, total meltdowns like 2008 might be avoided. A Minsky-ite like myself would be skeptical of that, but we will find out. For now, market participants did learn a lesson, and it is unclear how long it will take before the insane risk-seeking behaviour seen before 2007 will show up again.

The final qualifier is the use of national recessions. Recessions on a regional or sectoral basis still happen. (For example, the Canadian province of Alberta qualified as having a recession in recent years, if we use a rise in the unemployment rate as a recession definition.)

If you are laid off in a regional or sectoral recession, you are just as laid off as in a national recession. The only difference is that our friendly central planners at the central bank are incapable of doing much to head off such recessions, nor will they accept any blame if they happen. ("It's a healthy rebalancing!")

The business cycle has not been abolished, rather the business cycle is fragmented. We just need to ask what might cause the different business cycles to become correlated again. We might get lucky and manage to avoid such correlation over an extended period.

Dodging national recessions for a long time has been happening in the developed countries since the early 1990s, and it is not shocking to suggest that this might continue.

If put my manuscript of Recessions: Volume I, aside for a month or so, partly to allow for more feedback. Also, I can more easily spot issues with the text if I have not gone over it recently, as the text is fresh. (If you read a text that you have just written, you tend to read what you meant to write, and not actually the words you put down.)

As for Volume II, I think I will sneak in my "Intermediate MMT Primer" in between. The sequence of articles on MMT I just wrote are effectively one chapter (on price level determination). The next most important chapter will be one on fiscal constraints. Finally, the last planned chapter would be one that offers an overview of the MMT literature -- what to read next? (I am not counting the initial "What is this book?" introductory chapter.)

Once those topics are covered, I am not sure how much needs to be added, I am aiming for this to be a short text that people can read in order to see whether critiques they see in the news make any sense (spoiler: no). I do not care about every single piece of MMT theory, but I just want to cover what the main debates are about, and why most critiques are straw man attacks. The arcane stuff that some people get worked up about (consolidation, the external constraint) are things that only a handful of people care about.

The text will be short, and priced as such. As an ebook, being short is not a problem. However, too short a text makes having a paperback awkward. I might be forced to cheat and change the page size to a smaller one so that the text is not too thin. (I will worry about that when the time comes.)

The key is that I want this MMT primer text done quickly, so that I can go back to Recessions: Volume II. The main research task for me is to get my hands on "canonical" MMT articles to build out my survey chapter, since the financial constraints chapter pretty much writes itself.