Joe Weisenthal has been causing a stir on Twitter discussing "yield bugs": people who have an ideological belief that bond yields out to be positive. This Bloomberg opinion piece discusses this, as well as some other comments on negative yields coming to the United States. I have not followed that debate too closely, as I initially assumed that there was not a whole lot of people who believed that bond yields ought to be positive. This is because bond yields are essentially determined by central bank expectations, and there is not a lot stopping central banks from pushing short rates to negative values. 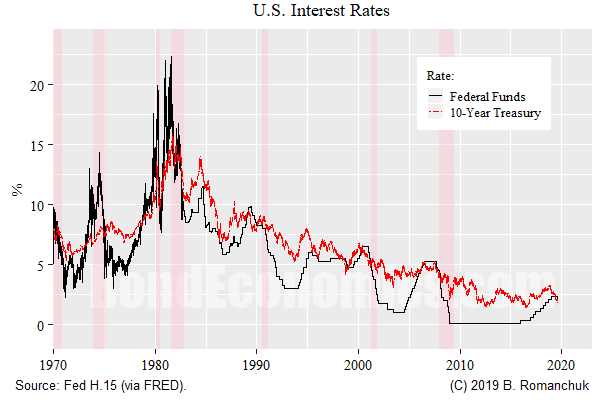 The figure above shows two key U.S. interest rates -- the Fed Funds rate, and the 10-year Treasury yield. Although the Treasury yield is set in a market, arbitrage relationships mean that it cannot march off completely independently of what the central bank is expected to be doing. It is not set by "savers" deciding what rate of interest they would like: as pension funds who failed to liability match discovered the hard way, "savers" in the bond market are price takers.

If the New Keynesians at the Fed want to march the Fed Funds rate negative, Treasury yields will follow suit. Yields can stay positive if investors expect a reversal of policy in the medium term, of course. However, given the track record of the New Keynesians, the policy rate is still stuck on tracks that are heading downhill. If a decent-sized recession hits within the next five years, it seems a near certainty that rates will end up as negative as the Fed thinks they can get away with.

The belief that "money" with a 0% interest rate will be an insurmountable barrier is a pipe dream: no large investor is going to stockpile bills in large amounts. Security is a nightmare (think about the plotline to the great Christmas film classic, "Die Hard"), and large amounts of cash are actually anti-liquid. The only plausible barrier are things in contract law, like the capacity to pre-pay taxes at no penalty. However, that only works for firms paying taxes -- which financial intermediaries managing assets for others do not.

The only thing that stops the Treasury curve from marching through 0% is the possibility that negative short-term rates -- which are literally a tax on bond investors -- would somehow causes the economy to accelerate. Given the complete lack of sustained acceleration in the major economies despite "unsustainably low" interest rates for decades, I would not suggest holding your breath waiting for that outcome. (Note: I re-wrote the first sentence of this paragraph since it could have been interpreted more strongly than what I meant.)

After a certain amount of to-and-fro on Twitter, I realise that the previous text skipped over some issues. I will now add a couple of extra comments. 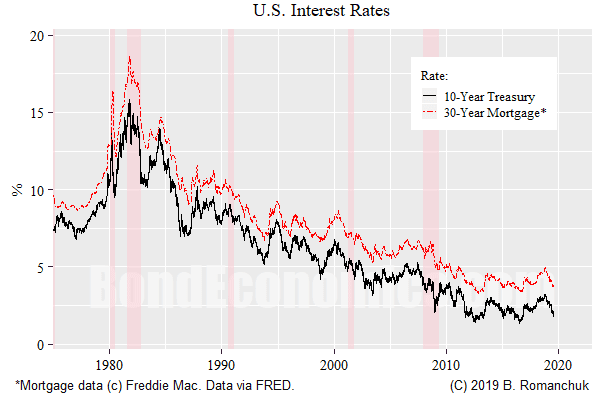 Deposit accounts that yield 0% are an obvious concern for negative rate regimes. Since banks can extract fees from customers, they can work around the fact these deposits turn into a high-cost funding source to a limited extent. However, negative interest rates would eventually force institutional changes to banking (even if we put aside the possibility of abolishing cash, a proposal that I think is terrible).

Private sector lending rates are at spreads above the risk-free curve. Unless the risk-free curve is deeply negative, those lending rates can still be positive. For example, I show the 30-year conventional mortgage rate versus the 10-year Treasury yield: we see a fairly significant spread at all times. (Why the 30-year mortgage versus the 10-year Treasury? The 30-year conventional mortgage is an amortising instrument, and so the duration ends up being close enough to a 10-year Treasury for my purposes here. However, I didn't show the spread since mortgage trading exports would scoff quite loudly at me.)

We can expect stickiness around 0% for lending rates, but that does not help people who are buying and selling bonds in the secondary market.

But there is nothing inherently impossible about a negative lending rate. If we look at mortgages, they are priced off of the yields of residential mortgage-backed securities in the secondary market. Those bonds are normally high quality (e.g., backed by the CMHC in Canada), and so they can trade close to the risk-free curve. As a result, the secondary market mortgage rate can be negative, and eventually institutions will be offering new mortgages at negative rates.

The other issue is: how far can the central bank push the policy rate into negative territory? (With the previously noted concerns about the banking system being the issue.) I have doubts about how deeply negative the policy rate can go, and so there is some form of "lower bound" for bond yields. However, that lower bound is certainly not 0%, and one could imagine that experience with negative yields will allow that barrier to drop with time.