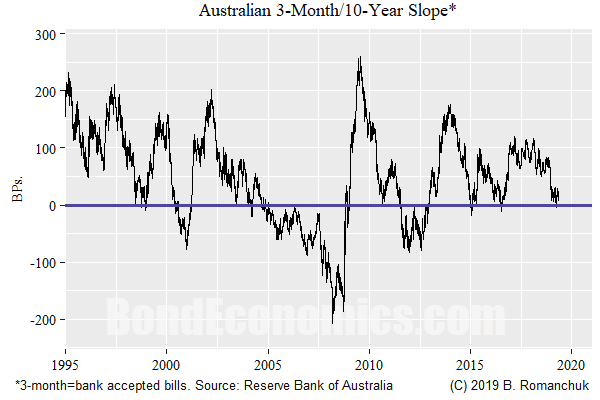 As a disclaimer, I am using "bank-accepted bills" as the 3-month rate, and so the curve would flatten in response to credit spread widening. I am working with data from the Reserve Bank of Australia (courtesy of my new research platform...), and so I am forced to deal with some limitations. My guess is that the Australian government bill market is too thin to provide a reasonable time series for bill rates. 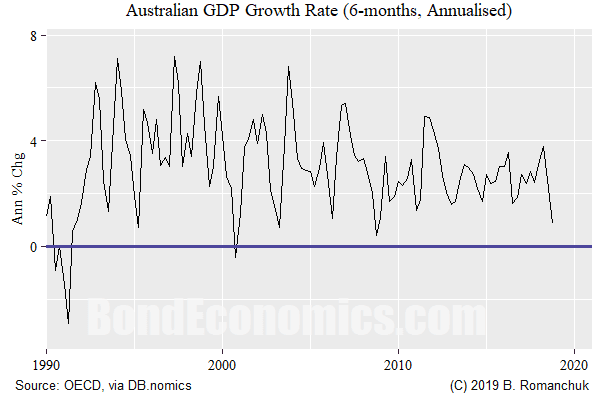 The chart above depicts Australian real GDP growth rates. (Source is the OECD, downloaded from DB.nomics, once again courtesy of my new research platform.) I am showing the 2-quarter growth rate on an annualised basis to make it easy to spot any episodes of two quarters of declining GDP. After the very early 1990s, there was only one decline in the chart (in 2000), but that was only a single quarter of declines. Therefore, on the "2 quarters of declining GDP" definition of recession, Australia has avoided one since the early 1990s.

Interestingly enough, this has nothing to do with fiscal policy - Australia is one of the few developed countries to run persistent fiscal surpluses at the federal level. (I have not added these data yet...)

I never covered Australia, but I looked at the data and followed market commentary. I believe the lack of recession can be largely explained by two factors: a commodities boom driven by Chinese demand, and an ongoing housing bubble (that did not pop in 2008). (Now that I have added Australian data to my repertoire, I will be looking at the situation there more closely for my book. Since I have been focusing on coding my platform, I did not have time to dig into the economics.)

As for the failure of the yield curve, it can be explained by my argument in an earlier article ("Using the Yield Curve as a Recession Indicator"): the job of bond market participants is to make money, not forecast recessions. The fiscal surpluses (and working from memory, a lack of private sector duration supply) pushed the Australian curve to extremely flat levels. Although I am definitely not a fan of "supply and demand" arguments about yield determination, rate expectations will be swamped as an explanatory factor if investors need duration and there is no supply.

In summary, one needs to be careful about claims regarding the yield curve based on the experience in the United States, as the U.S. curve in fact may be an outlier in terms of recession prediction accuracy.