The relationship between labour market slack and inflation (typically referred to as the Phillips Curve) is complicated, as it depends upon the structure of economic institutions. The post-1990 era saw labour market reforms that led to widespread underemployment. This article summarises some points from the Modern Monetary Theory (MMT) textbook Macroeconomics by Mitchell, Wray, and Watts (affiliate link). I replicated a chart of Australian data -- which of course meant that I needed to add support for data from the Australian Bureau of Statistics on my research platform.

The figure above shows the annual rate of change of CPI inflation in Australia (top panel), and the the (seasonally adjusted) unemployment rate. (Unfortunately, I have been too knee deep in Python to fix my R plot formatting on the new system.)

If we look at the period up until 1990, the behaviour was somewhat as-expected by economic folklore. After 1990, the relationship broke down. CPI inflation was steady as a rock, while the unemployment rate charged up and down in both directions. 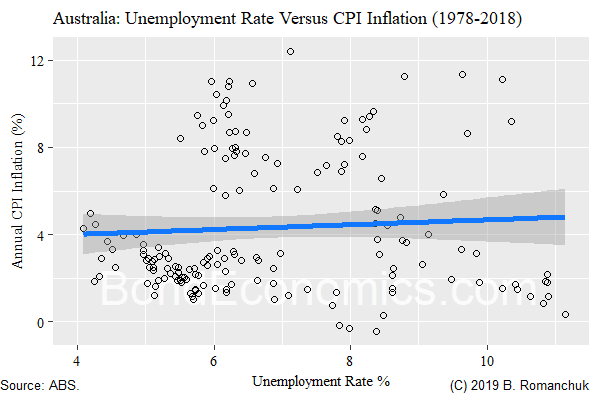 We can see the lack of relationship easier in the above figure, which is a scatter plot. The blue line is the standard linear regression between the two variables; pretty much no relationship.

It is possible to hear a lot of hand-waving explanations about the lack of relationship between inflation and unemployment: central bank inflation-targeting credibility, expectations, etc.

One of the rather foolish complaints about MMT is the lack of formal models. However, the formal approaches don't do particularly well. In this case, there was supposed to be a NAIRU: a level of unemployment at which the inflation rate would accelerate. As discussed in Section 18.5 of Macroeconomics,


However, the textbook notes that the structure of the labour market changed in the 1990s. In particular, underemployment rose (above).

This actually rescues a statistical relationship (below). 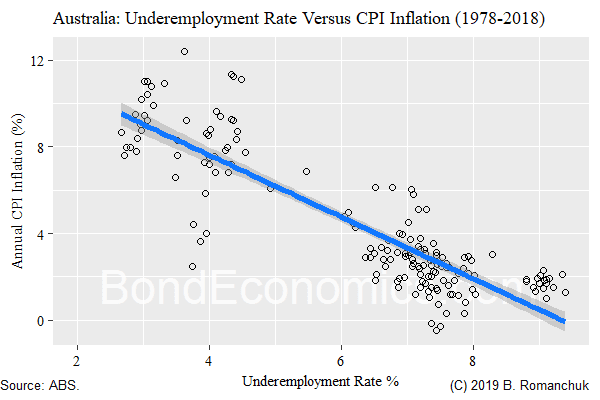 The textbook argues that this relationship holds up under more sophisticated econometric analysis.

I do not have the time to delve deeper into the MMT analysis of inflation, but these complications that we see in the real world explain the perils faced by formal models: if you ignore concepts like underemployment, the models will break as new regimes are entered.

This is why I am not concerned about the lack of simple models that allegedly "explain MMT": those simple models are useless, so who cares?

I needed the underemployment data from the Australian Bureau of Statistics (ABS), as it is not available at various data aggregators. Unfortunately, I was not able to find the data either on the new ABS SDMX page, so I would have to get them from Excel files.

If I were a more sensible person, perhaps I would have just grabbed the series I needed from the files with a cut and paste operation. However, since I want to add Australian data to my coverage, I bit the bullet and added an expansion to my research platform that parses the excel files.

The pandas numerical library does the heavy lifting (along with the xlrd module), but the challenge is going through the spreadsheets to find the desired series. The series in each table are split into multiple worksheets. My routine does a brute force search: open each Excel file in the data directory, and then iterates through each worksheet, looking for ones that have the correct layout. Not exactly elegant, but more advanced solutions would wait on adding more programming support routines into the platform. Right now, I want to keep new additions to the minimum so that I can do a code base clean up (refactoring).

A minimal interface to SQLite databases is built, but it needs to be beefed up so that it is easier to search for series that are in the database. The list of external providers is now:


With the ABS statistics added, the only only sources I am likely to add in the near run are the UK and Japanese statistical agencies (if I cannot get the data from DB.nomics). This is to support my quest for international data to beef up my book on recessions. Since the platform functions for me, I will let other development drop to the back burner while I try to finish off my book.