I have been working heavily on my research platform; it has reached a stage where I can do most of my work with it. Which means that I can go back to economics analysis. It is probably too early for other people to start using it, but a Python programmer could probably get the code up and running. This article explains the current features of the platform, taken from https://github.com/brianr747/platform/blob/master/README.md.

At the end of this article, a R language usage example is given.

Platform to download, manipulate and plot data. Mainly Python, with some R. Built around a MySQL database (eventually).

(Note: if this is every to be a serious project, it needs a better package name. Since all my code is in a single PyCharm project, I can refactor the name easily, but users need to know that the package name may shift.)

Python 3 only. I work on Python 3.7, and no idea about backward compatibility issues.

This repository is mainly for my own use for now; I am transferring my platform to a new computer, and decided to do a clean up at the same time. In particular, the MySQL interface is not implemented.

Please note that all features listed are minimal implementations. However, they offer an idea
of where this project is going.

Providers
"Single series" interface only; there will be table query support (for pandasdmx).
Databases
No meta-data support until the SQL interface is attacked.

Series are loaded with a single fetch() command that sits between user code and the underlying API's. This means that there is only a single command for most end users to worry about.

The fetch() command is dynamic; the ticker is a combination of the Provider and the Provider-specific ticker. (Once SQL database support is added, users can configure friendly local tickers that are mapped automatically to the clunkier provider tickers.)
The Provider code will decide whether it is worthwhile doing anotherAPI query, and most queries will be incremental. This means that users can fetch the same series 100 times in a row, and the provider API will be hit with perhaps one API refresh call in a day. The update protocol would be extremely important for an "industrial" multi-user platform, but is not a pressing issue for me.

Programming Support
Analysis Support
The main planned work (which will be done when heavy development starts) is to create classes to clean up chart management: create a library of charts, that can be configured/customised ("chart talk") to create particular images for publication.

On the analytics side, I might try to interface with my simple_pricers module, or if I am ambitious, quantlib. Needless to say, my focus would be on fixed income calculations (e.g., calculating total returns from par coupon data, forward rate approximations, etc.)

With a fair amount of effort, users could replicate my examples. However, there will be example wrappers for various web interfaces which may make things slightly simpler to work with.

I may write a book on research platform construction; at which point this repository would be beefed up.

My plotting code is in R. I am not that great a R programmer, and my code is a mess. I expect that I will migrate to a pure Python platform at some point. However, the R code is an example of how we an use a SQL database as the interface point between different languages.

There may very well be a similar package out there; I did not even bother looking. If there is a similar project, I guess I could switch over to working wit it. However, since most of what I am doing is small wrappers on top of fairly standard libraries, not seeing that as worthwhile. I am not too familiar with pandas, and it looks like most of what I would be doing is within pandas already. Instead, the effort is getting everything wrapped into a high productivity environment.

Plans.txt has some thoughts on my plans for this project.

EarlyAdopters.txt has some comments aimed at anyone who wants to use this package. 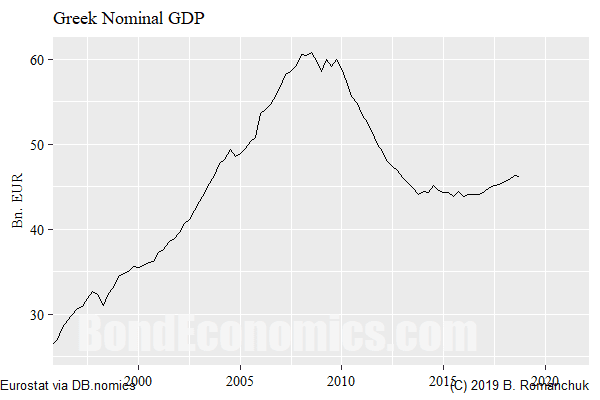 The chart above was created in R. (Note: the plot formatting is messed up; apparently, there's been some changes to the R plotting library I use that broke my chart format.) Done with minimal code. Note that R is calling the Python package, and so if the underlying series was not already downloaded, it would have been automatically fetched. (In the future, the loading code would decide whether to dynamically update the series as well.) The R wrapper function I use invokes logging, so you can see what is happening (is the series fetched from the "database" versus doing a provider API call, etc.).

Note that since the series was already downloaded, the series was fetched from the TEXT database. Also, the CANSIM, DB.nomics, and FRED modules are coded as extensions which were imported successfully. (This way you can see even from within R whether something went wrong during package initialisation.)