Should We Care About Technical Recessions?

My current plan is to organise my book on business cycles around recessions. However, while thinking about one topic, I realised that there was one technical issue that pops up: what happens if there is a recession that is largely inconsequential? We have not had such recession in the United States in decades (if ever), but we have to accept that such events are possible.

The premise of my book is that recessions are significant events, with important consequences. Furthermore, I prefer a somewhat more qualitative approach to economic modelling, and in my view, it is both difficult and pointless to attempt to forecast the tiny wiggles in economic variables during an expansion. ("Will real GDP growth this quarter be 2.0% annualised, or 2.5%?") Instead, we need to focus on events like recessions, and try to get a rough handle on their severity and timing. However, if the recession events are not meaningful, why bother?

From the perspective of investors, recessions are typically momentous for asset pricing. The main worry for most is the tendency for equity bear markets to roughly coincide with recession. For fixed income investors, recessions typically trigger rapid rate cuts, which leads to rallies (affecting duration strategies) and outperformance at the front end (affecting curve strategies). Meanwhile, defaults tend to rise, leading to wider credit spreads. However, what happens if we get a recession event, and nothing interesting happens in asset markets? For example, betting the farm on a recession call by massively shorting equities, being correct about the recession, and losing money anyway because stock prices went up would be a rather embarrassing epitaph for a career in asset allocation.

This issue came up in 2008. At present, we know that the National Bureau of Economic Research (NBER) recession dating committee has set December 2007 as the start date of the recession. However, this determination was only announced on December 1, 2008 (a year later). During that period (at least until the Lehman Brothers weekend), there was a debate among financial market economists) whether the United States was in recession at all, and even if it was, whether it was a "technical recession." (I will leave it as an assertion that this debate existed; there is no value documenting which economists argued that recession would be avoided several months into the recession.) 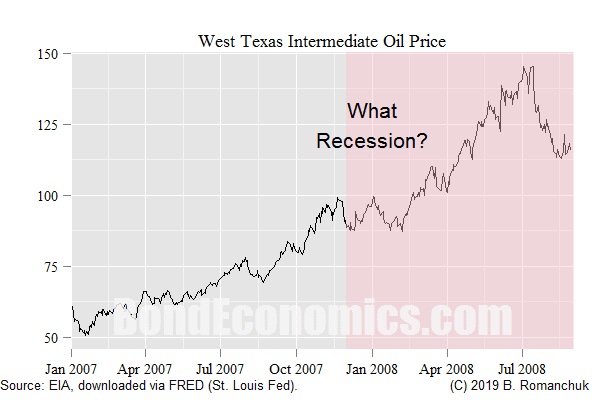 It must be remembered that many financial markets were not particularly spooked by the December 2007 U.S. recession start date. The oil market was particularly exuberant, and oil prices marched towards a rather impressive bubble peak around $150/barrel (above). Although weakness in the United States was acknowledged, it was largely explained away. Since oil is a globally-traded commodity, it was not completely implausible to ignore softness in the U.S. economy in isolation.

However, it should be noted that the credit and money markets had seized up before the official recession start. For example, the fallout in structured paper led to the collapse of the asset-backed commercial paper (ABCP) market in Canada, which resulted in the restructuring known as the Montreal Accord.  If you paid attention to the developments in the credit markets, the price action in other markets was highly puzzling.


Why Would We Ignore a Recession?

It is obvious with hindsight that market strategists who downplayed the slowdown in early-to-mid 2008 -- or central bankers who hiked rates -- were horrifically wrong in that case. However, we can imagine circumstances where similar views would end up being quite reasonable. I will now highlight some arguments.

Recession definition.  In the United States, the NBER is charged with determining the official start and end dates of recessions (and expansions). Other countries lack such a body, and a "recession" is defined as two quarters of declining real GDP. There is certain amount of wonkiness in the definition of real GDP itself. For example, a spike in import prices actually lowers the GDP deflator (since imports are negative term for the GDP expression), which could cause some some non-intuitive jumps in GDP. Such technical effects create volatility in real GDP, and it would not be far-fetched for a slowly-growing county to have two back-to-back negative real GDP quarters even though not much interesting is happening. It seems safe to argue that such events are not particularly meaningful. For the rest of this discussion, I am assuming that we have a more robust definition of recession, where triggering it is not

Output contraction without employment loss? Economic theory is wedded to the notion of production functions, where output is a function of capital and labour employed. Since the stock of capital moves slowly, fluctuations in output are assumed to match fluctuations in employment. This is not necessarily true. Output can fluctuate without much effect on domestic employment. For example, a cooler summer may result in less need for air conditioning, reducing electricity demand and output. Admittedly, very large deviations between output and employment are rare. However, it points to the possibility that the conditions in the labour market might be largely unaffected by falling output. If the labour market was relatively tight (for example, if conditions were similar to those now), we could imagine the central bank not responding to output fluctuations.

Sectoral or regional recession? In larger countries, economic conditions vary greatly across regions. It is not that unusual for one region to have a recession, while others are booming. In Canada and the United States, high oil prices are a boon for the oil-producing regions, while they represent a drag on consumers in other areas. If a region was previously overheating and then blows up (a fairly common occurrence for commodity-producing regions), it is unclear whether this would be sufficient to trigger a response by the central bank if the other regions of the country have strong labour markets. Other than companies/sectors directly hit by the bust, the slowdown may have no effect on the prospects for earnings (and hence equity prices).

Lack of financial vulnerability. If fairly conservative financing practices prevail, there is no particular reason that a slowdown must trigger significant defaults. This is true even for the household sector (in the short-term, at least). Layoffs are often cushioned by severance packages, and households hopefully have some liquidity cushion, more than one wage-earner, or access to unemployment insurance. The final defence again a wave of defaults is the time it takes for bankruptcy to occur; if bill collection is dragged out long enough, employment may have risen enough to prevent a default wave.

Globalisation. Multinationals are increasingly dominant, and their plans will look through weakness in particular countries.

For the United States, I would generally assume that the NBER recession criteria will imply that official recessions will be significant events economically, and financially. That said, we need to keep in mind the possibility that a downturn could be fluctuation that both markets and policymakers look through.

This will show up in the discussion of recession probability models, which I expect to discuss next. Although these models look quite good from an analytical perspective, we need to keep in mind the possibility that even if the recession signal is triggered, we may not get the side effects that are "normally" expected. This is not a defect of the models themselves, rather a weakness of the definition of a recession.

Finally, one may note that as a result of the sluggish growth in the United States in the post-crisis period, we were not far away from technical recessions. Would outcomes have been any different if one were declared? Based on those past trends, a technical recession in 2019 would not be a spectacular surprise; the question remains is whether it is worth positioning for.