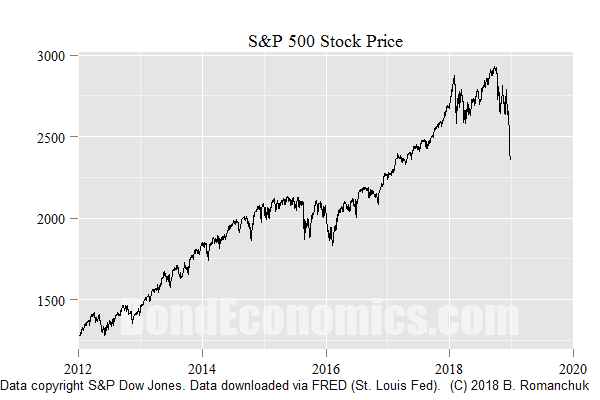 For those of us who own equities in our retirement funds, the latest dive in stock prices is somewhat disconcerting. However, the question remains: how significant is this weakness on the rest of the economy? I am in the camp that downplays the significance of the information embedded in stock prices: although very useful in theory, in practice, stock price movements are driven by the herd psychology of investors. Even so, it raises the issue of a recession odds for 2019.

Holiday markets are extremely thin, and the desire to take risk among fund managers is probably the lowest it gets during the year. It is actually surprising that violent moves over the holidays occur as infrequently as they do. We will not get a good feeling for investor sentiment until January.

I started working in finance in the late 1990s, when Alan Greenspan was the Fed Chairman. Greenspan scandalised many traditional central bankers by paying attention to the stock market. In particular, I doubt that many Bundesbankers were even aware of the existence of stock markets.

In my view, the traditionalists had a point. For example, if the Fed cut rates in response to the latest turbulence in the equity markets, there is a reasonable possibility that the stock market would come roaring back, and risk-taking behaviour would end up even more deranged than it was in recent years. When that risk-taking goes bad, historians would tut-tut the central bankers, and accuse them of panicking in response to transient market turbulence.

What matters is credit. Unless there is a reason to believe that the flow of credit has been cut off, the stock market should be left to seek its own level. I would not exactly hike rates if the stock market is falling by about 1% per day, but that's about it.

What is unusual this time is the panic in the executive branch. Although the Trump campaign wants to position Donald as a hard-headed businessman, it is abundantly clear that the administration panicked like small children in response to the fall in the stock market. (The evidence is the bizarre Mnuchin letter/tweet about bank liquidity.) The proper role of the administration is to act like grownups, and offer vague platitudes ("the business of America is business!"). I doubt that level heads are going to be in surplus in the next crisis.


Should Anyone Else Care?

There are two reasons that we should care about the stock market (other than our own investment position).

I am firmly in the camp that #2 is perhaps correct, and unimpressed with #1.

I certainly do not have my finger on the pulse of the economy (I've been dealing with a handbook on breakeven inflation). I will be turning to a book on recessions, and so the possibility of a near-run recession is something that I will switch over to discussing at length in the New Year. Right now, I am unconvinced about recession odds, but I want to underline that is based on information that could very easily be out of date. As a result, I am agnostic on the question whether the fall in equities is telling us anything useful about the economy at large.

That said, I do not have a lot of patience for theories that the equity market itself matters much for the economy. Take a look at recent history -- we have had an equity boom since 2010, yet growth was at best tepid. The equity market is not really a source of capital; instead it is where capital largely goes to die (stock buybacks at prices well above current levels). Equities represent a large portion of household sector balance sheets, but those holdings are concentrated within an ultra-rich cohort that does not have a great propensity to consume out of equity wealth. (Otherwise, we would have had an economic boom.)

Recessions will be a major focus of my writing in 2019. Whether or not that will be of topical relevance remains to be seen. Stay tuned!