Frances Coppola recently wrote “The myth of monetary sovereignty,” that rehashes some old complaints about Modern Monetary Theory (MMT), which could be summarised as saying that MMT is only applicable for the United States. There are perhaps some claims within the article regarding developing economies that are worth debating, but they are not of interest to myself. My background and writing interests are in the analysis of the developed economies, and I largely stick to my knitting.

(As an update on "Inflation Breakeven Analysis": the book should be ready for ebook publication by next week, unless something else goes wrong with formatting.)


The Revenge of the External Constraint

A good portion of the article is the revival of the “Kaldor-ian” Post-Keynesian critique of MMT on the grounds of the external constraint. I wrote about that debate in an earlier article: "MMT and Constraints". So this is old ground. I want to just focus on some specific claims made by Coppola.

(Update) Frances Coppola was offended by this summary of her article. She argued that her article was about developing countries. We could summarise the position as "MMT does not apply to developing countries." This interpretation is not entirely consistent with the various absolute statements that I quote here, in which phrases like "any country" or where she uses Australia as an example. At the minimum, her article would need much more careful editing to limit the scope of her claims.

If we want to just focus on the developing countries, her argument might be summarised as:

I would find the first point hard to argue with (although one may note that the largest developing countries probably fall under that category). The second point is a debate for experts on developing economies, which I am definitely not. In any event, that is an extremely narrow criticism of MMT.

I have left the rest of this article unchanged, as I am addressing direct quotes from her article. 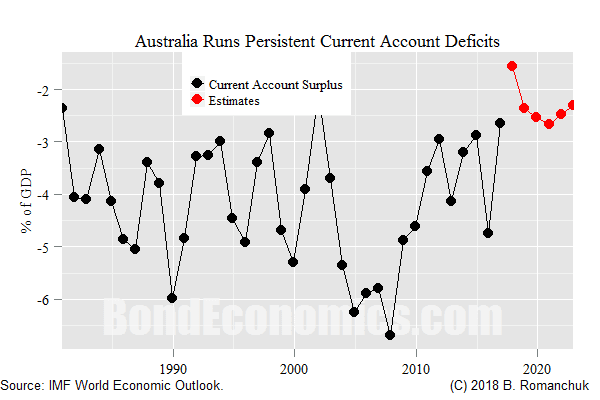 UPDATE #2 (2018-11-04): I was informed on Twitter that a reference to the Australian current account was deleted. I have to get some work done, so I am not going to attempt to address whatever text she replaced it with. I deleted my original text here, which was based on the original article. I will leave the chart in place to illustrate a key point: countries can run current account deficits indefinitely. If the "external sector" limits "currency sovereignty," those limits can operate at a glacial pace for countries with robust financial systems.

Any good description of MMT or Functional Finance notes that “inflation” limits government action. Although some people conflate “inflation” with something like the “rate of change of the CPI,” there is no reason to believe this. Most descriptions of Functional Finance are deliberately vague about what prices are included in “inflation.” In particular, one should include the external value of currency as one of the prices that are in the basket that we care about.

This is not enough for some people, including Frances Coppola (and Kaldor-ian Post-Keynesians). Apparently, it is necessary to invoke the totem words “external constraint” in every article one writes. Sorry, that ain’t gonna happen. There is no need to break out the value of the currency as a critical separate concern to be tracked.

The first objection is related to good policy: the smart policy is to not promise that any particular currency value will be defended. Otherwise, the nitwits in the private sector will start borrowing in foreign currency. Instead, borrowers must be taught to fear currency risk. (I will return to this topic later.)

The next problem is that the external value of the currency is related to capital market valuations, which are inherently unstable. This is not the 1960s, where capital controls had the side effect that trade flows determined currency values; in 2018, capital flows rule the developed country forex markets.


Printing more dollars simply hastens the exchange rate collapse. After all, for you to buy dollars, someone has to be willing to buy your currency. And who in their right minds would buy a currency whose value in dollars was falling through the floor?

Who would buy a currency that is falling too far relative to fundamentals – such as wages, or purchasing power parity?


Obviously, if policy settings are extremely inflationary, then the fundamentals will point to a much weaker currency. However, that is just Functional Finance.


For most countries, the need for external borrowing crucially depends on the external balance. If the current account is balanced or in surplus, then they will earn the dollars they need to pay for essential imports. But any country that runs a current account deficit inevitably borrows dollars.

Although imports and exports may be denominated in dollars, this tells us very little for the developed countries. Forex flows are dominated by portfolio flows. If we look at the post-1990 period for floating currency developed sovereigns, I was unable to think of a single large default that was traced to the borrower borrowing in a foreign currency. (Derek Kaknes on Twitter pointed out Iceland; I am not familiar enough on what was happening in local Icelandic borrowing to disagree.) Borrowing is hedged by either cash flows, or via the currency swap markets. The only entities foolish enough to borrow in foreign currency are those based in countries with some form of an exchange rate peg, or recently left a currency peg system and did not know any better. (For example, the brain trust at the City of Montreal decided it was a good idea to borrow in Swiss francs in the 1970s.)

Current account surplus countries have no choice in the matter. Either they purchase the domestic currency denominated assets of the deficit countries, or they have to let their currencies appreciate until their surplus is closed.

Admittedly, the combination of capital controls and a fluctuating currency value is a rare combination. However, that is a weak argument – one could have argued against the possibility of fiat currencies during the gold standard era, since most countries pegged to gold.

Meanwhile, if we look at the pre-1914 gold standard, we did have a combination of fixed currency parities, and a relative lack of capital controls.


However, there is a hierarchy even among reserve currency issuers. High on the list comes Japan, because its debt is held almost exclusively by its own citizens (and its central bank), and investors regard it as a "safe haven" in troubled times. But the ostensibly similar Switzerland has less monetary sovereignty than Japan, because it has extensive trade and financial ties to its much larger neighbour the Eurozone.

The “Japan exception” is not the result of the mainly Japanese holdings of Japanese debt. Japan is in a strong position because Japanese nationals have massive claims on foreign countries.

If one is sufficiently pessimistic, one could imagine a major disruption to normal trade flows. (For example, Godzilla returns.) Japan is dependent upon many imported raw materials, and one could imagine that the yen would be under severe pressure. However, the holdings of Japanese debt are immaterial in this case: even if foreigners hold Japanese debt securities, their value will be deflating in nominal terms. Japanese nationals’ holdings of financial assets in commodity producing nations is what would provide Japan the financial firepower to import goods.

Frances Coppola’s concerns about fixed versus floating exchange rates for developing countries is presumably interesting to many, but it tells us little about the validity of MMT.

Email ThisBlogThis!Share to TwitterShare to FacebookShare to Pinterest
Labels: Economic Squabbling, External Sector, MMT, Stuff I Read On The Internet