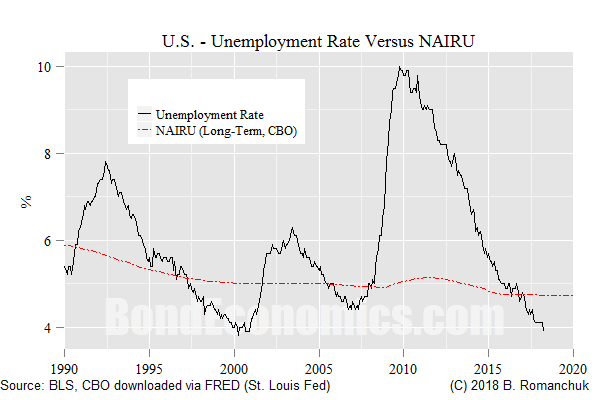 The figure above shows the Congressional Budget Office's (CBO) estimate of NAIRU (non-accelerating inflation rate of unemployment), which might be thought of as a "natural rate of unemployment" (although there is a distinction for those who care about that distinction). If the NAIRU exists, it offers a very straightforward prediction: if the unemployment rate is below NAIRU, the inflation rate will accelerate upwards (and accelerate downwards if the unemployment rate is higher than NAIRU).

I have not shown the inflation chart, but is abundantly clear that inflation did not accelerate in either direction over the post-2010 period, despite the hefty divergence between NAIRU and the unemployment rate.

Mike Konczal discussed this controversy in "How low can unemployment go? Economists keep getting the answer wrong." Although I enjoy beating up on economists, I would note that even within mainstream circles, there is a fair amount of eye-rolling when the topic of NAIRU comes up. There was wider belief in the early 1990s, but the failure of NAIRU in the late 1990s did cause dissension in the ranks. There are perhaps some fundamentalist believers in NAIRU -- who deserve all the mocking that they get -- but I think there is a wider consensus that NAIRU is in some sense an approximation of the right relationship (and keep the economic research money flowing so we can study it!).

(Note that Modern Monetary Theory academics have a severe allergy to NAIRU, as taken literally, it would imply that the Job Guarantee would be disastrously inflationary (since the unemployment rate could approximate 0%). If we tweaked the NAIRU definition, we could get a similar relationship that holds in a post-Job Guarantee world. Since my view is that NAIRU is generally not taken too literally, I will not worry about this issue.)

For what it is worth, my opinion is that the economy has settled into something resembling a steady state, and the pace of hiring is relatively tepid when compared to past cycles. In the absence of something to kick up animal spirits and trigger an investment boom, inflation rates will at most tick upwards. I could easily be repeating variants of this article for years.

I will next turn to the theoretical significance of the failure of NAIRU.

I have been recently thinking about the limits of forecasting (as discussed in recent articles). The difficulties with NAIRU are part of the empirical behaviour of the economy that motivates my arguments about forecasting. (The other main issue for forecasting is the behaviour of businesses.)

The first thing to note that economists (of all stripes) have an unusual emotional attachment to all the various failed highly aggregated labour market models. (What I mean by highly aggregated is that we are using a single variable to capture the entire state of the labour market, whether it is unemployment rate, or the employment-to-population ratio.) As a result, most discussions of this topic turns into a tour of economic history, with an emphasis on slightly different models (which time series shows up on what axis)? The ugly reality is that they all failed, so it doesn't really matter who said what when.

In other words, we could probably attempt to fit a simple model against almost any particular set of economic variables, and end up with something that qualitatively looks like a NAIRU-based model. The key is that we will end up with a single variable that describes the slack in the labour market: a generalised output gap. What matters is that this is a single variable, which we could then slap into a Kalman Filter to pin down its latest value. The beauty of this technique is that is probably fairly robust to model specification error: if the labour market/inflation relationship could be collapsed to a single generalised output gap variable, the statistical technique would pin it down (even though we have the wrong model). The failure of these techniques to be useful is a hint that such a generalised output gap does not exist.

However, there is an alternative, which exists in the (old) mainstream and heterodox traditions: we split up the labour market into segments. (Modern DSGE macro has a hard time dealing with things that are not representative agents, so this is harder to implement in modern mainstream theory.) We can then come up with a story (based on mathematical models, for those who insist on quantitative work!) that fits the observed outcomes in the United States. Very simply, job losses mainly hit the part of the labour market that is filled by people with less education, and that part of the market still has a lot of slack.

Furthermore, on the demand side, employers have systematically been suppressing wages. I am unsure how this effect could be quantified, although the collapse of union power (which can be captured by union memberships and strike actions might act as a proxy). However, the collapse of union bargaining power is a secular trend story, and it is hard to fit against monthly data.

The problem with these more complex models is that they cannot be easily estimated, and so they are not particularly suited for forecasting purposes. Meanwhile, as a society, we have decided that it is more "scientific sounding" to say that "inflation will accelerate if the unemployment rate is below 4.73%" (as that statement contains numbers to two decimal places) than to make qualitative arguments based on a wide variety of indicators. This preference holds even though the forecasts provided by this methodology are systematically incorrect. "What is your forecast (model)?" is the response by NAIRU proponents to skeptics.

This is why we need the concept of forecastability. We can then point out that if we apply NAIRU methodology to models that are not forecastable, we get exactly the types of forecast errors we see when we apply the methodology in the real world. In other words, NAIRU believers are attempting the impossible, and failing in a perfectly predictable fashion.

Email ThisBlogThis!Share to TwitterShare to FacebookShare to Pinterest
Labels: Forecastability, Labour Market, US