Business Sector Is The Main Source Of Modelling Uncertainty

From the perspective of those who work or are interested in finance, it seems obvious that business decisions are a major driver of the business cycle, assuming that policymakers are not doing anything particularly stupid (as in the Euro area in the post-crisis period). The important exception is the housing market, which is dependent upon the willingness of households to borrow insane amounts of money. (However, even this exception is dependent upon the decisions of the financial sector to extend the insane loans.) Conversely, one of the advantages of a mainstream economics education is that common sense is buried, and the view is that the primary driver of the business cycle is households' decisions to optimise consumption choices over time. The result is that the difficulty of forecasting business sector decisions is swept under the carpet.

In previous articles (link to list), I discussed the notion of forecastability of an economic model -- could we forecast future outcomes based on public information within the model? The previous discussions were based on an extremely simple stock-flow consistent (SFC) model, whose behaviour could be forecast; all we need is access to a short back history of model data, and we could estimate the unknown parameter values.

It is clear that this model discussed was too simple. Instead, we need a model that minimally represents an economy. What we see is that model complexity explodes, and we will lose the ability to forecast outcomes.

We can take the models from Godley and Lavoie's Monetary Economics as examples. (Unfortunately, I have not yet added these models to the Python sfc_models framework; I expect to do so as I advance my business cycle book.)

The simpler example is model DIS of Chapter 9, which has inventories, bank loans (and model DISINF adds inflation). In model DIS, the production/pricing equations represent 14 out of 27 equations, with another 6 equations for the banking system. These equations are a mixture of accounting identities (or definitions) and behavioural equations.

Model DIS is still too simple, as it is not capturing the growth dynamics associated with capital investment. If we jump to the growth model prototype in Chapter 11, there are 44 equations describing just the business sector (11.1 to 11.44).

From a modelling perspective, the equation count in stock-flow consistent models is bloated; the number of state variables is much smaller than the number of equations. Even so, we will likely end up with more free parameters than could be easily estimated with the runs of data that we normally have access to.

The problem is not just the parameter count; a lot of key information is realistically not directly observable. The most important of which are the general expectations for growth and profits. Firms will normally only engage in fixed investment if they believe that there will be future demand for their wares.

Businesses that supply other producers (farmers, businesses) with capital goods are particularly susceptible to this. They need to ramp up their fixed capital if they think their customers will in turn be ordering more capital goods, so that they in turn can meet demand from their customers. (Note that even the big SFC models do not capture these multi-sector effects, although they are a feature of the not-very-popular large scale models that were the cutting edge of 1960s macro.) 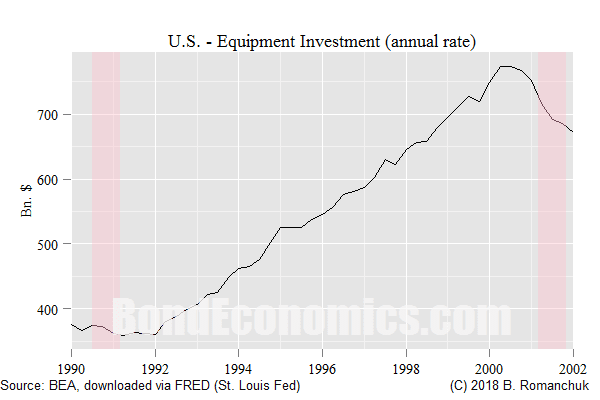 The best recent example of this was the Telecom boom and bust during the 1990s. The telecom equipment suppliers were market darlings. (Working from memory, Northern Telecom was over 50% of the market capitalisation of the main Canadian index; this led to the popularity of capped index equity products here.) They ramped up their capacity to supply the telecoms companies that went on an investment binge as a result of the euphoria over the World Wide Web and 3G telecoms. When capital market funding dried up for the telecoms companies, and the pain fed back into the telecom equipment suppliers. (My last teaching assignment was a senior undergraduate communications systems course in spring 1998; a good portion of that class went off to work for various telecom companies. They were probably all looking for a new careers by 2002.)

(The figure above shows all private equipment investment in the U.S., not just telecoms. The telecom industry was prominent, but other industries also participated in the capital spending boom. That was the last hurrah for corporate capital investment in the United States; management has since kept domestic investment on a tight leash.)

We have no way to directly measure these expectations of growth. We can try using proxies (like stock market prices), but that creates other issues, as there is a gap between the concepts. For example, stock prices could be driven by day traders who watched a couple of hours of business television and decided they were experts on the growth prospects for the tech industry. We can use past history to create an estimate of the current state of "animal spirits," but that cannot tell us about key breaks in behaviour.

Returning the telecom boom, the party ended when the lenders pulled the plug on funding. (This also held for the housing bubble of the 2000s.) We did not find out what the threshold was for that event by looking at previous data -- we only found out once we crossed it. Extrapolating past behaviour worked during the boom, but we had no information to determine where the bust would occur.

(Once I get other projects out of the way, I hope to track down some simpler models that exhibit this behaviour, so that this can be expressed more quantitatively.)

My discussion here should not surprise any macro investors; they should have figured this out relatively quickly. Instead, I have run through the logic to help explain why economic models are generally of limited use to such investors in the first place. The desire for tractable models has caused economists (from a variety of schools of thought) to focus on models where such concerns disappear. (Once again, I would refer the reader to the discussion of tractable models by Beatrice Cherrier.)

I would summarise the argument against the more complex SFC business cycle models as follows. (Since this is just a preliminary outline of the discussion that I want to cover at greater length in future research, I am just dealing with a straw man argument here. I have seen variants of this discussion, but I am not currently concerned what people who are wrong think.)

The obvious rebuttal is that we can fit these reduced order models to the data, and they fail. So the retreat is to add epicycles, shocks, or have variables that are not directly measurable moving around to fit any observed data. And this is not just economists doing this, it is not hard to find physical scientists scientifically fitting reduced order models to data. (It's scientific, since anything done by a scientist is scientific, by definition.)

The correct answer is to note that the chain of logic is not exactly "scientific" -- rather it is wishful thinking. We wish to base economics on mathematical models.  We wish that those models are reduced order ones that can be fit to data.

As I repeatedly assert to my kids: life ain't fair. Just because you wish that the economy can be described by a reduced order model doesn't mean that it can be.

Furthermore, if we stop wishing that we can find the magic reduced order model to solve all our problems, we can then roll up our sleeves and deal with reality. Take a look at those spurned complex SFC models. What happens if someone insists on fitting a reduced order model to the complex model output? They will be able to project trends during an expansion, but their models will break down during a recession. And this is exactly what happens to those models in the real world. This is no longer in the realm of qualitative hand-waving, since we can make quantitative predictions about the way reduced order models will fail.