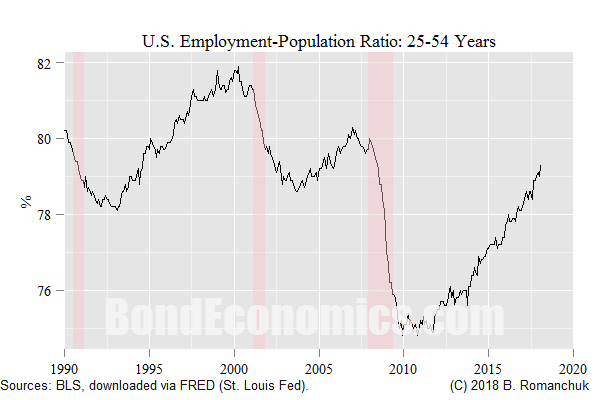 Based on a quick scan of the latest U.S. labour market data, the chart above best encapsulates my reading of the state of the market. I have been a perma-dove on inflation, and I do not see any immediate reason to change that view. Inflation has been anchored for a very long time, and I think it will take a lot to move core PCE inflation to more than 2.5%. Nevertheless, this does not necessarily translate into a perma-dove view of the Fed. As the chart above shows, it is easy to come up with reasons for a less sedate pace of rate hikes going forward.

Additionally, I show the prime age employment-to-population ratio to partially control for demographics. Labour market hawks have been explaining this entire cycle how the participation rate was permanently lowered by the ageing population. (Since many people retire early, a greater weight on the older cohorts will reduce the overall employment-to-population ratio.) The reality that Canada -- which has an almost identical social and demographic structure -- has not seen such a drastic permanent effect was usually shoved under the carpet.

In any event, we can see that this measure is now within shouting distance of the previous cycle's peak. Since we did not actually see much inflation (excluding asset prices) in the previous cycle, that is probably not where the inflation barrier is. Instead, the 82% achieved in late 1990s coincided with last period when the labour market plausibly overheated. Demographics may have lowered that danger zone, but it is not surprising that wage growth is still mild. (Average hourly earnings reverted to past form in February.)

Of course, even if wage growth gets perkier, this does not have to translate into higher consumer prices. Profit margins can fall, and help return the wage share of total income back towards to historical averages.

As a result, I am not worried about realised core CPI/PCE inflation going forward. However, the Fed does not look at the world the way I do, and I expect that the urgency to get the policy rate higher to act as a brake on growth is growing. Sooner or later, that upward climb in the employment-to-population ratio will have to stop, if we are to avoid overheating.*

If the Fed believed their fancy modern econometric models, the policy rate is near estimates of the neutral rate, and so there is no need to panic on the rate hike front. However, it may be that with the personnel changes on the FOMC, the Fed will revert back to more primitive monetary policy thinking. The benchmark for "neutral" rates will be trend nominal GDP growth (a belief that should deeply frighten any bond bulls).

I mentioned the belief that the neutral rate is equal to trend nominal GDP growth rate in a recent article, and I was asked about it. If you look at modern literature, that theory is not common; trend growth rates might be a factor in determining the "natural rate of interest," but there was no need for equality. I think the belief came from older equilibrium models, where the simple version of the model led to equality. This simple model showed up in economics 101 textbooks, and so it ends up being regurgitated in market folklore. (I think I saw it in the entry for the "(neo-)classical growth model" in the Palgrave Dictionary of Economics, but I no longer have access to that book. Furthermore, it was probably an edition from the early 1990s, since I looked it up in the late 1990s.)

Even if the reasoning behind the theory "the natural real interest rate equals the trend real growth rate" is specious, all that matters is having enough people believing in it. The real economy is not that sensitive to interest rates, so the central bank has the capacity to put it where market folklore thinks it should be.

* I am burying some theoretical issues under the carpet here, related to some MMT views. Firstly, it may be that Fed rate hikes will not act to slow the economy. Although that theory has some merits, the Fed does not agree with that assessment, and so it does not matter for forecasting Fed policy. Secondly, it might be possible to raise the employment-to-population ratio to beyond the late-1990s peak without inflation if appropriate institutional changes were made. Since those institutional changes are not happening right now, we need to instead look at the inflation performance of the institutions we are stuck with.