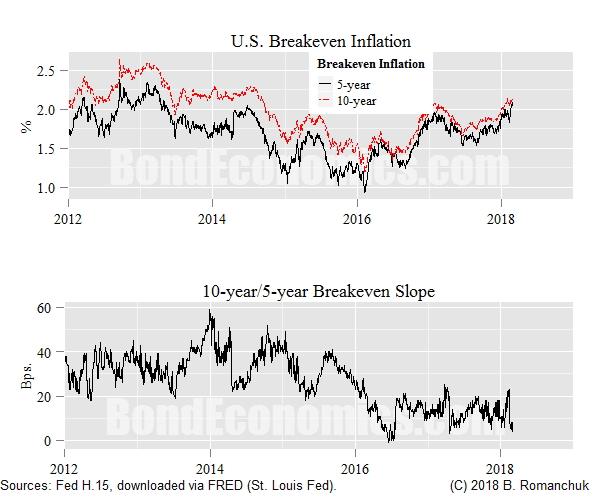 My reading of the consensus view is that the change in personnel at the Federal Reserve has coincided with a more hawkish outlook, although the tax cut presumably helped push matters. I do not have a strong reason to disagree with such a view; the Fed is probably going to revert back to its historical policy of gradualism -- which was a 25 basis point hike per meeting.

The bottom panel shows the slope from 5-year to 10-year breakeven inflation. It has been drifting lower, and is closing in on 0 basis points. If we were to run into a scenario of the economy overheating (presumably as a result of the tax cut) that is then corrected by monetary policy, one would expect the slope to invert. That said, one needs to keep in mind the relative importance of gasoline prices; a spike in gasoline prices will have an immediate one-off effect on the level of the CPI, and this will naturally cause the breakeven inflation curve to invert (since the effect of a one-off shock is inversely related to the tenor of the breakeven). Therefore, I would interpret market pricing as suggesting a relatively clean "monetary policy offset" of fiscal policy.

My gut reaction is to downplay the importance of the latest budget moves on long-term breakeven inflation. Even if the deficit widens in the short-term, the fiscal policy reaction function of free market-oriented politicians has been stable over the past few decades. In response to the widening deficit caused by tax cuts, they will then cut social spending. These social spending cuts will have a greater multiplier than the tax cuts, so the net effect on growth (and inflation) will end up being negligible (even though debt levels will rise). This is a judgement call based on my reading of politics, and could obviously turn out incorrect. Nevertheless, I have my doubts that even if the spending cuts do not materialise, the multiplier on the tax cuts will be low enough that I doubt that there would be meaningful overheating.

That said, the Federal Reserve will not react that way. Until spending cuts materialise, they will need to accept the fiscal projections at face value. Furthermore, they are likely to look at the dollar amounts of the deficit (rather than the multiplier effect), and conclude that the fiscal policy mix is far more stimulative than I would. As a result, nominal rates could easily be adjusted higher; if the markets are similarly skeptical about the effect of fiscal policy, that would show up in breakeven inflation being stable (and hence, real rates are adjusting higher).

The easiest way for the Federal Reserve to deal with this is to go on autopilot, and hike either every second meeting, or even every meeting. Interest rates will be meaningfully higher within 18 months, and they would have time to pause with the policy rate much closer to the growth rate of nominal GDP. Although the only reason for the policy rate to be close to nominal GDP growth is tradition, central banks are inherently a traditionalist institution.

Returning to breakevens, Duy's comments about 2% being a ceiling is extremely important for long-term pricing. If the Federal Reserve does not tolerate (PCE) inflation above 2%, the long-term average will be biased below 2%. As we have seen, recoveries from modern recessions are slow, and inflation will run below 2% for years. For TIPS pricing, one needs to add in the effect of the statistical bias, but this still limits the rise in fair value.

I realise that most market commentators and Fed watchers will have kittens when the possibility of hiking every meeting comes up. Eight hikes a year (or, 200 basis points a year) may seem shocking when the Fed was previously doing 1-2 hikes per year. However, it must be remembered that the Greenspan/Bernanke Fed was being screamed at for being too "gradualist" for doing exactly that in the previous cycle. Even if one argues that there is slack in some parts of the labour market (which I do), monetary policy cannot be targeted to reach those pockets. A well-designed fiscal policy could target regions and labour market cohorts that are suffering from under-employment; but this is not being attempted.

The focus for bond market pricing should no longer be the number of hikes, rather the terminal policy rate. Unless the economy is derailed by a near-term recession, the Fed will probably hit is comfort zone for the policy rate relatively quickly if it moves to a regular hike schedule.

As a final aside, I am skeptical about the effect of steel tariffs. Slapping around America's allies with steel tariffs now seems to be a standard tactic for Republican presidents. It locks the Democrats into singing the praises for free trade, and thus alienating them from the swing voters that delivered Trump the victory in the electoral college. With that political objective accomplished, there is no need to escalate further.

Email ThisBlogThis!Share to TwitterShare to FacebookShare to Pinterest
Labels: Central Banks, Linkers, US