This article is meant to be worked into my upcoming Inflation Breakeven Analysis report, although it contains background information that appears in other sections.

Although one could try to define the economic breakeven for a linker relative to a particular nominal bond, such a definition has some risks. It is much cleaner to define the economic breakeven versus an entire nominal discount curve. This way we have a sensible discount factor for every inflation-linked cash flow. This is not the case for matching against a particular nominal bond. The maturity dates may not line up, and it is unclear that a flat discount rate (the nominal bond yield) is useful, as the cash flow patterns of a linker and a conventional bond are different. (If inflation breakeven rates are positive, the inflation-linked bond will tend to look more like a zero coupon bond.)

We can then define the economic inflation breakeven as the extrapolated inflation rate that results in the inflation-linked bond being fairly priced on the nominal discount curve. If we are being careful, we should also take into account inflation seasonality, and so we are technically extrapolating seasonally-adjusted inflation, and then backing out the "seasonalised" equivalent of the series. (This is the reverse operation of the more standard seasonal adjustment procedure.)

Since we can have two conventional bonds with "similar" maturities trading after different yields, the simple inflation breakeven varies based on comparator. Things can get quite messy for short-dated bonds, as a few month mismatch between the conventional maturity and the linker maturity can result in a large seasonal adjustment factor between the two maturity dates.

However, if we are looking at fitted bond yields (e.g., the Fed H.15 Report series), the simple breakeven is a good approximation of the economic breakeven. 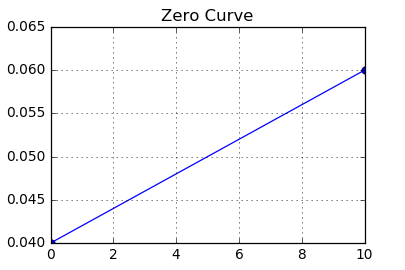 We start off with the nominal zero curve pictured above, with the zero rate rising from 4% to 6% at the 10-year tenor. A fixed income relative value specialist would likely point out that the above zero curve is implausible, but that is not a concern here.

(All calculations were done in Python in my "SimplePricers" package. The code is not meant for production purposes, but rather examples to illustrate how more complex pricers work. The code is available at: https://github.com/brianr747/SimplePricers, the results were generated by the file ex20180216_breakeven.py in the examples folder. The code used to generate the examples today used some shortcuts, but it is expected that these would not materially change the outcome. I have not had a great deal of time to validate the work, but the numbers appeared plausible.)

We will assume that all nominal bonds trade at fair value on the above zero curve.

We will start with a 10-year 4% annual coupon inflation-linked bond that is trading at par (hence a 4% real yield).

Using the simplification that inflation rises smoothly from the valuation date (and that there is no known information from CPI calculation lags), the economic inflation breakeven rate was 1.80%.

Meanwhile, I have two 10-year conventional bonds.
Obviously, the simple breakeven could get further out of line if the comparator is grossly mis-priced versus the zero curve.

As can be seen, the standard practice of subtracting the fitted inflation-linked bond yield from a fitted nominal bond yield (both series being par coupon series) is going to give numbers that are in the ballpark of the true inflation breakeven for bonds that are trading near par, for sufficiently long maturities.

At shorter maturities, we would need to worry about the effects of seasonality and known information about the future path of the daily CPI index. For example, if we are calculating the inflation breakeven rate of a bond that matures in five weeks, while we know that the daily CPI index will rise very rapidly over the next three weeks because of an gasoline price spike in the last CPI report, the economic inflation breakeven rate may bear little resemblance to the spread between the inflation-linked bond yield and the yield on a 5-week nominal instrument.

(My example code ignores what is known about the daily CPI index when defining the economic breakeven inflation rate.)