What Is The 10-Year TIPS Breakeven Telling Us? 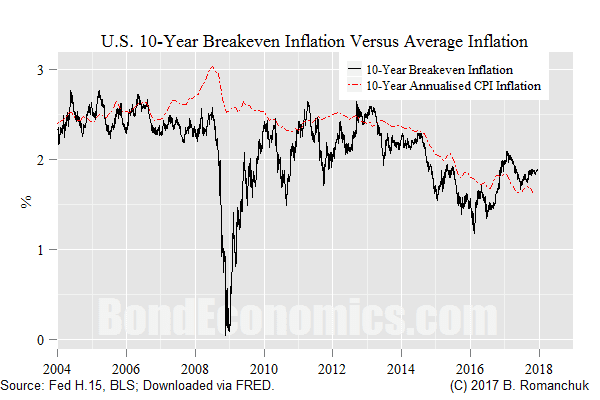 The 10-year inflation breakeven rate for the United States is 1.88% at the time of writing of this article. (Link to primer on breakeven inflation.) The usual way of describing this is to say that the "market is pricing in an average inflation rate of 1.88% over the next 10 years." I believe that the simplest interpretation of this observation is the correct one: on average, markets expect CPI inflation to run below its implicit target over the next decade.

NOTE: This article is a followup to a previous ones on breakevens. I want to write a report on breakeven inflation which will be much more technical than my usual style here. This discussion is probably going to be the most qualitative section, and I am very unsure how to write it. I am throwing ideas at the wall, and see what will stick. I apologise for the fact that some ideas might be repeated, These articles will be condensed into a single section, and the train of thought straightened out at that point.


If You Are an Investor, the Economic Breakeven Is What You Want

The chart above is the spread between the 10-year TIPS and the 10-year nominal (conventional) Treasury (Federal Reserve H.15 fitted curve data; 10-year conventional minus the 10-year TIPS quoted yield.) This measure is usually close to the true economic breakeven: what level of annualised inflation leads to the inflation-linked bond having the same return as the conventional bond? For my purposes here, I am referring to the true economic breakeven, the calculation of which might require some corrections based on data that I do not have access to (such as funding differentials).

If you are an investor with a long investing horizon, you should use the difference between the economic breakeven and your inflation forecast as the input to your investment decisions. Adjusting for an unknown inflation risk premium biases your input in one direction or another; your investing process decision rules should tell you what premium you need to make a position attractive.

However, not all users of breakeven inflation data are investors. Economists (particularly at central banks) want to take market pricing and use them to infer an implied inflation forecast. For a variety of reasons, they wish to remove the effects of any risk premia in yields, to get an unbiased forecast.


Is There An Inflation Risk Premium?

I am not a fan of such methods. My first objection is straightforward: we do not have enough data to know whether such a premium exists. In conventional bonds, we can look at centuries of money market data to see that a premium exists; in fact, a good portion of finance theory makes an a priori assumption that bonds will outperform cash.

(As an aside, the chart compares the 10-year breakeven with the 10-year annualised inflation at the same date. This is allegedly a foolish thing to do: I am comparing the backwards-looking realised inflation rate to the forward-looking 10-year breakeven. Even so, one can see the time series tend to track eachother, outside of the obvious divergence during the Financial Crisis. In an environment of stable inflation around an inflation target, this is perhaps not too naive: investors may be assuming that policymakers have a bias in missing the inflation target, and they use the historical miss to calibrate their estimates of the future miss.)

Looking at the above chart, I could easily explain the 1.88% breakeven in two ways.
Needless to say, that gives us a lot of ground to cover. However, it does rule out some possibilities. For example, it seems implausible that the market has an unbiased forecast of 1% or 3% for inflation. If we wanted to be realistic, we could put error bars around the raw breakeven inflation rate to get the range for unbiased inflation forecasts. We really do not have enough data to calibrate those error bars. If we cannot really measure the effect, why are we attempting to model it?

I do not give investment advice or play the forecasting game. However, if I were working for a fund that was bearish on conventional bonds, I would certainly be looking at index-linked bonds as one way to express that macro view.

For example, let us assume that the 1-year breakeven has a risk premium of zero. If we look at the 2-year breakeven, even an apparently innocuous 50 basis point risk premium has implausible implications. This is because the 1-year, 1-year forward inflation risk premium would have to be double that premium -- 100 basis points. As an analyst, it would be very easy to structure an attractive trade to take advantage of such a premium; a holding period of one year is easily done at some money managers. As a result, so long as the premiums at the very front end are small, the term structure of the inflation risk premium has to be smooth and back-loaded. The reason why I am skeptical about affine term structure models is that they tended to imply highly implausible trades at the front end of the curve.

The fad amongst researchers to subtracting premia from observed economic breakevens is curious. The limited amount of realised returns data means that we have a hard time validating that inflation expectations are systematically mispriced to a large extent. Meanwhile, the uncertainty around everyone's oil price forecast probably dominates any plausible inflation risk premium estimate.

My discussion of the term premium was noted on Twitter. This brought up the article by Matthew C. Klein from last year, on the conventional term premium. I have added this appendix to remind myself to see whether I can reference that discussion when I finally write this up...