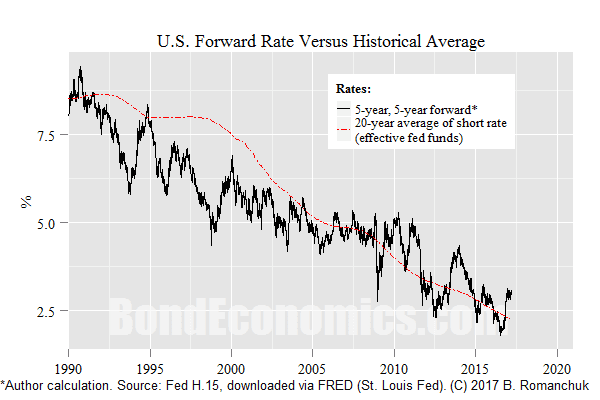 (This article was written Tuesday; I am assuming that there has not been a radical repricing. Looking at the scale on the above charts, I doubt that any market movements over the next few days will affect the big picture on pricing.)

I discuss rate hike cycle at much greater length in Interest Rate Cycles: An Introduction. The key argument is that bond yields are driven by expectations for the path of short rates, and not some abstract notion of "supply and demand."

If you are trading short-term interest rate futures (fed funds, Eurodollar), yes, the short-term path of the policy rate (and LIBOR spreads) matters. However, if you are looking at the pricing of a 10-year Treasury Note, you need to have a forecast horizon similar to that 10-year maturity.

Obviously, it is difficult to formulate a plausible 10-year economic forecast. In practice, we need to assume that interest rates will move towards some kind of "steady state" as we get beyond our normal forecast horizon. For example, we would expect the 5-year rate, 5-years in the future, should reflect expected average interest rates.

The chart at the top of this article shows the 5-year Treasury rate, 5-years forward (based on my approximate calculations, using the Fed H.15 table). It is still relatively low when compared to its historical average.

However, that average was proven to be too high, as I discussed in "Historical Treasury Term Premia: Huge!" We know that bond investors ended up receiving massive returns from carry and capital gains when they bought bonds at historical bond yields; instead bond yields should reflect the average of short rates.

The other line in the chart above is the 20-year average of the short rate (using the fed funds effective rate). The forward rate is now above that rate, and thus may be viewed as already incorporating a risk premium.

Of course, past experience may not reflect future market movements. The alleged secular era of a negative real rate may have disappeared (because Donald Trump was elected?), and so interest rates could head higher. At the same time, we know that rates will get slashed to zero (and presumably Quantitative Easing ramped up) by our New Keynesian central bankers in response to the next recession. We are now in stuck in an activity that is even more slow-moving than watching paint dry: gauging the tepid pace of rate hikes versus recession odds.

Unless the Fed picks up its game and starts hiking at every single meeting (200 basis points a year), it will take at least two years for the spot short rate to start challenging the levels of longer-term forward rates. Until then, it would be very unsurprising to see forwards chopping around within a reasonable distance of their current levels.

This will greatly disappoint commentators who assume that bond yields will move one-for-one with the policy rate. Sooner or later, people will start resurrecting the "conundrum" silliness we saw in the last cycle.