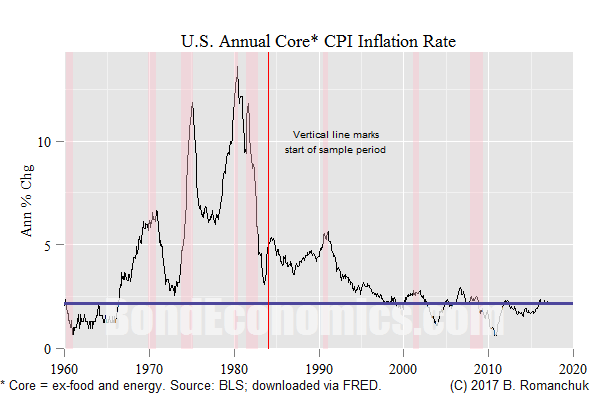 On March 3rd, Stephen G. Cecchetti, Michael E. Feroli, Peter Hooper, Anil K Kashyap, and Kermit L. Schoenholtz presented the paper "Deflating Inflation Expectations:  The Implications of Inflation’s Simple Dynamics" to the 2017 U.S. Monetary Policy Forum. I had read comments about the paper elsewhere, and the key takeaway of my comments here is that such external commentary had no relationship to the analytical content of the paper. My feeling is that the paper's analytical content is not telling us anything new; whether the Cecchetti et al.'s verbal conclusions are useful are left for the reader to decide.

[Side note: The production error that led to defective paperback copies of Abolish Money (From Economics)! has been fixed. If you received such a copy, you should be able to get compensation or a replacement copy from the retailer you purchased it from. Contact me via my website if you are having difficulties. Sorry to those who were inconvenienced.]

This paper is an example of empirical economics, which is allegedly under a revival within mainstream economics. The problem with empirical analysis in the absence of theory is that the researchers just end up ignoring hidden theoretical assumptions. My feeling is that the preaence of such hidden assumptions is the key flaw of the paper in question, which is why I am not going to spend a great deal of the reader's time dissecting the analysis.

One of the amusing things about discussions of economics is that analogies to physics are continuously invoked -- but never when they might be useful. In the current case, we have a wonderful analogy to use.

Imagine that you are a physicist in a strange alternative timeline where you have access to modern measuring equipment and digital storage technology, but somehow had no theory of gravitation.

Would you rather have:
If you blindly followed the types of statistical analysis used by economists in journal articles, you would prefer #1, since you have a greater sample size. Needless to say, that's the wrong answer.

This is where theoretical assumptions kick in.
If you look at the verbal discussion within "Deflating Inflation Expectations," the authors are aware of the issues I am discussing here. For a somewhat inexplicable reason, they chose the post-1984 period to do their analysis (the period after the vertical line in that chart at the top of this article).

The best summary of their statistical analysis is as follows.
The only intellectually honest answer is to admit that all of this is consistent with inflation in the United States after 1984 is in some form of a steady state. Any number of theories can explain such an outcome, particularly when we keep in mind that factors unrelated to capacity pressures in the economic explain much of the residual volatility in post-1990 measured inflation.

I can project my own intellectual biases onto that evidence; Cecchetti et al. do their own. If the reader wishes, they can read the paper, and see if their biases matches your own.

I want to underline that the distinction I draw between the mathematical/statistical analysis and the verbal description of that analysis is not a feature that is peculiar to this paper: pretty much the entire modern mainstream macroeconomic literature features such divergences.

However, when reading commentary on the paper, I saw two obviously wrong theories being projected onto the paper's results by other people.
I discuss these in turn.

Inflation expectations are a big deal in modern economic theory. Modern mainstream macro has devolved into imputing everything onto expectations. It has reached the point that we have academics suggesting the central bank can set nominal GDP to whatever level it desires, solely through a triumph of the will (and they are taken semi-seriously).

This has created some controversy around the subject, which I am going to ignore here.

When discussing inflation expectations, we have to distinguish two very different concepts.

For the first concept, the paper "Deflating Inflation Expectations" discusses various surveys, and does the empirical analysis. I will let the reader draw their own conclusions. My bias is to not put too much faith in these measured series. There are three main types of such series, derived from the bond market, and surveys of economists and consumers.
In summary, we will only get some useful empirical insights when we break out of the low inflation regime.

Turning to the theoretical concept of inflation expectations, I would argue that it is obviously important. However, we need to look at hidden assumptions.

Mainstream economics wants to assume that everything is priced like futures contracts: they jump around around following obscure laws of supply and demand, and are not closely linked to the behaviour of particular individuals. (In fact, many economic reforms in recent decades have been using this as an ideal towards behaviour should be forced.)

If you assume flexible prices, it is entirely reasonable to pretend that the price setting process is somehow magical, and we need to come up with mysterious econometric procedures to determine it.

However, in the real world, most prices are administered. The administrators may be literally governmental administrators, or they may be bureaucrats within some firm. In particular, almost everything in the Consumer Price Index is the result of administered prices; the important exception being gasoline prices (which is a major source of CPI volatility).

How are prices administered?
In other words, the inflation expectations that matter are the expectations of the people administering prices (or possibly by union representatives negotiating administered pay settlements). Once we understand that this is how prices are set, we realise that the relationship between inflation and inflation expectations is a tautology (a statement that is true by definition): prices will only rise faster than before if administrators expect their input costs to rise by more than before (that is, generalised inflation).*

Therefore, the correct answer to the empirical questions about inflation expectations is as follows. To what extent surveys do not work, that is the result of the survey being of the wrong people. Unfortunately, there is no reason to believe that a good survey could be constructed.

I do not want to dredge up the dreaded NAIRU debate, but the analytical conclusions of the paper say that it is a useless concept.

This should be obvious: a cyclical economic series is correlated to "the cycle" by definition, and hence, any two cyclical series are likely to have some form of correlation. The question that matters: can we use this correlation to make predictions?

Furthermore, the test is polluted, since the definition of NAIRU that is used was backfit to get a desired statistical relationship between it and inflation in the early part of the sample period.

The only intellectually honest analysis is that we have not found a methodology that generates an "unemployment gap" that has any useful predictive properties. Believing that a NAIRU exists is pretty much as useful as believing in Santa Claus: perhaps he exists, we just can't prove it.

However, we cannot jump from the failure of NAIRU to saying that "labour market tightness has no effect on inflation."

Think about the following thought experiment.

Nobody in their right mind would expect anything other than a fairly hefty inflation. The indexation would ensure that any one-time price level shocks would be perpetuated.

(And if you are a believer in NAIRU, you would also have to believe that this policy shift would lower the unemployment rate dramatically in order to generate the observed inflation.)

There are any number of theories that can explain the results of the paper in question. We can only distinguish the validity of those theories by moving to a period of more volatile inflation.

More generally, this paper reinforces my views about how we should approach economic analysis. We need to keep theoretical assumptions in mind when looking at empirical work. Furthermore, we need to draw a very strong distinction between an empirical analysis within a paper, and what the paper's authors say the implications are.

* There is a technical niggle about my discussion of inflation and markups. In theory, we could have inflation in a cost-markup model as a result of rising profit margins (markups over expected cost). In practice, such an effect is not going to be sustained for very long.