Can't Anybody Here Play This Game?

The embarrassing inability of the Republicans to pass a health care bill has helped kill optimism about a "Trump boom" in the financial markets. My feeling was that it would not be that difficult for the Republicans to rally around tax cuts, but that may be too optimistic a reading of their legislative competence.

I had low expectations regarding a Trump presidency, but it seemed that the Republican-controlled Congress could enact the least common denominator of the conservative position: tax cuts.

However, the spirit of Reagan's Voodoo Economics has left the Republican party, and they may not be able to enact much in the way of tax cuts. Rather than letting projected deficits to run wild, the Republicans will have to make budget room for cuts. Slashing spending on programmes favoured by the liberal-left will free up some budget space, but that is going to be a drop in the bucket when compared the wishlist of the defence lobbies. Furthermore, it will be difficult for Trump to propose much in the way of infrastructure spending without the projected gains from the Republican health care plan.

Without serious tax cuts, the only real hope for revving up the business cycle may be that deregulation creates a new bubble somewhere. Although this is a plausible outcome, it is hard to see what part of the economy would generate enough fixed investment to markedly increase growth rates. 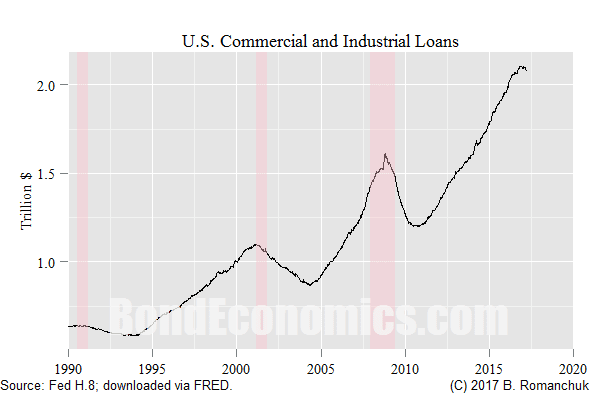 Another problem with the "Trump Boom" story is that the expansion is already quite old. Fixed investment remains mired at mediocre levels. The chart above shows one particularly troubling indicator -- commercial and industrial ("C&I") loans on commercial bank's balance sheets. (This series is from the Federal Reserve H.8 Report.)

I do not worry about the swings in the growth rate in loans, rather I am more interested in it as a recession indicator. As can be seen in the chart above, the stock of loans generally increases during an expansion, then drops during a recession. The fact that the series seems to be topping out is a sign that one should be digging through other cyclical data to check whether this is corroborated by other data.

I discussed this series in an earlier article, explaining why I viewed it as a good indicator. To summarise, bank lending to businesses largely represents lending to small and medium businesses, as large corporations tend to fund in the wholesale financial markets. As a result, the amount outstanding is a good indicator of credit demand by small and medium businesses. Meanwhile, since funding strategies change markedly over time, it is much harder to piece together what is happening with borrowing by large corporations.

In other words, if President Trump is going to kindle animal spirits in the business sector, he may have to start winning soon.

Finally, the Real World Economic Review published a special issue on "Trumponomics." I have not had a chance to read many of the articles, but I liked the article by Stephanie Kelton, and it covers much of the themes I am discussing here. (Needless to say, it was written when Trump still appeared to have political momentum.)

Email ThisBlogThis!Share to TwitterShare to FacebookShare to Pinterest
Labels: Business Cycle, Fiscal, US