Will Treasury Yields Ever Escape The Low Yield Trap? 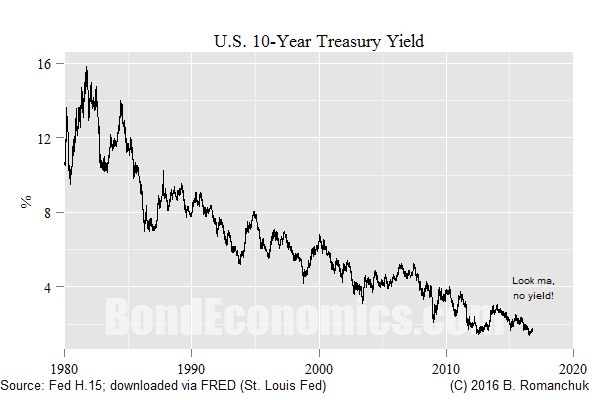 I was at a dinner last week that was associated with a financial industry conference in Montréal. The investors were generally not focused on fixed income, but I was asked the following question - is there anything which will drive developed country yields up? Furthermore, I have seen a number of recent articles declaring how rising bond yields will lead to some sort of crisis, so I just want to refresh comments that I have made on this topic over the past few years.

For this article, I will just write about U.S. Treasury yields, as most other developed markets are in a similar position, although with some thematic differences (for example, Japan). The exception (as always) is the euro area. By re-introducing sovereign risk, the brain trust in the euro area managed to demote their government bonds to emerging market status. As always, emerging markets are a roller coaster ride when compared to the sedate govvie markets that I focus on.


Cyclical Bear Market Possible - So What?

It is entirely possible that there will be a Treasury bear market that could drive the 10-year yield up to 3%, or gosh, even 4%!  (Please look at the y-scale on the chart above to get a handle on the context of such a yield change.) Such a move will probably cause at least some funds to blow up, and cause excitable talking heads in the media to scream about the end of the world. As I discuss below, such a bear market is a nothingburger - so long as you are not invested in (or work for) one of the funds that blows up.

Even if such a yield rise occurs, the New Keynesians at various central banks will slice the policy rate back to 0% at the next downturn, so we would still be stuck in the same secular low yield environment. What I am interested in for this article is whether the 10-year yield could hit 5-6%.

Why do I draw this distinction? At 4%, Treasurys are still far below the actuarial hurdle rates used by institutional investors. They will still hate the asset class, just slightly less than they do now. At 5-6%, they are within a whisker of target rates of return, and govvies once again look legitimately investable. (They are now, but only for negative reasons -- you own (non-leveraged) govvies because you think other asset classes have negative expected returns, or for liquidity management.)

For believers in the natural rate of interest, the complete lack of economic acceleration implies that the actual policy rate is near the natural rate. (I discuss this further in Interest Rate Cycles.) Therefore, there is no reason to believe that the current level of interest rates is "unsustainable."

Central bankers generally have to at least say that they believe that a natural rate of interest exists. Therefore, in the absence of a change of personnel at the central bank, the only way of greatly dislodging the policy rate above 3% is for the economy to accelerate.

What Is The Source of Acceleration?

There is not a whole lot of reasons to expect economic growth to accelerate on its own. We either need a change in "private sector" behaviour (which also includes the foreign sector, and trade policy decisions by foreign governments), or else there could be a policy-induced shift.

The most likely candidate for a change in the private sector would be for the development of a labour-intensive sector that starts growing. Although this could happen as the result of a new technology, technologists currently have a singular focus on eliminating labour requirements. Although I see such shifts as possible, I do not have any strong candidates (but that may just reflect my lack of imagination). However, in the long run, rising labour intensity is almost certain, but possibly not for good reasons (for example, rising energy costs could make capital substitution for labour non-economic).

A policy-induced shift in nominal growth is always possible, but I am not holding my breath. For example, massive labour-intensive projects could be ramped up. The current governing elite is doing quite well with the current policy mix, and so I see little reason to expect voluntary policy mix changes. Populist politicians are picking up on the discontent of the non-elite, and so perhaps a changing of the guard could lead to more rapid governmental job creation.

In other words, higher nominal GDP growth would finally push conventional central bankers to raise rates. It will presumably happen sometime, but as JGB bears have discovered, "sometime" can be decades after you are stopped out of your short govvie positions.

One alleged wild card is the tendency for markets under pressure to turn price corrections into routs, as trend followers pile in, and weak hands get stopped out. One periodically hears that governmental bonds are in a bubble that is going to collapse and crush everybody.

The reality is that government bonds are hated by the investment committees for institutional investors. On the retail side, I have never talked to a retail investor who was excited to buy government bonds, and I have been billing myself as a fixed income analyst of some sort since 1998. I got questions about assets like internet stocks, condos, high yield, and energy stocks all of the time. Developed government bonds? Crickets.

The only weak hands on the horizon are the "risk parity" shops, and the relative value fixed income funds who always end up with too much leverage at the top of a cycle. Sure, such funds blowing up might cause a certain amount of entertainment, but the reality is that their balance sheets are tiny relative to the real money investors. The wiping out of those weak hands is probably part of the mechanism behind a cyclical bond bear market.

Pretty much every major pension plan has assets that are shorter than their actuarial liabilities. There is some level of interest rates that causes them to step in and stabilise the market. They would certainly be very happy if that level was 6%, but if everyone is fantasising about the markets delivering the same thing, we tend not to have that outcome.

The market alone cannot move the long end too far; yield rises have to ratified by a hawkish central bank.

In the present environment, the level of the currency may be the only transition mechanism from the policy rate to the real economy that is functional. The theory being that if the Fed hikes rates, the U.S. dollar would soar versus its trading partners (that have even more sluggish growth). This would damage trade competitiveness, and act to slow growth. This might take further rate hikes off of the table.

Although I have some doubts about that story, it is clear that a lot of central bankers roughly believe in this effect. As a result, we are unlikely to see a single developed country central bank to go off on its own with rate hikes, if every other major central bank is keeping their policy rate near zero. The implication is that changing conditions in one country might not be enough to move the global high quality interest rate complex.

Although a cyclical bond bear market could always hit, getting the nominal bond yield to 5% or above is probably going to require some structural economic changes to the major developed economies.