The Political Problems with Helicopter Money

One of the problems with “helicopter money” is that the proponents of the concept give very sketchy and differing descriptions of what it actually is. From my personal perspective, another difficulty with discussing the idea is that I disagree with the politics. Depending on how “helicopter money” is conceived, either it is an insult to the intelligence of the electorate, or it is premised on the idea that politicians are structurally biased towards favouring deflationary policies – a stance for which there is very little evidence.

(This article is an unedited draft that will be published in my next book: Abolish Money (From Economics)! There is only a small amount of material to be added, at which point I will be doing another pass of editing. This has taken longer than expected, as the book is now at 50,000 words, while my initial target was 20,000 (ouch). Some material will be moved for publication later. Although it may be possible to publish in early November, that may put too tight a deadline for myself and my advance readers and editor. Since I want to avoid publishing in December, the most likely target is a publication date in early January.)


What is “Helicopter Money”?

I will discuss the technical definitions of “helicopter money,” elsewhere. I will instead offer high-level summaries from political economy perspective.

Firstly, the origin of the term came from Milton Friedman, who needed a mechanism to explain how the central bank controls an “exogenous” money supply. In order to create money, central bankers allegedly fly around in helicopters and drop money onto citizens’ heads. Since the money is not exogenous (as I discuss in “Primer: Endogenous Versus Exogenous Money”), this whole line of argument can be easily dismissed. In summary, if you do not believe stupid things about “money,” you will not believe stupid things about central bank operations (central bankers hopping into helicopters with bags of cash).

Otherwise, there are two flavours of “helicopter money” from a political economy perspective; implementation details can vary between proponents.
I will discuss these policy options separately, after a digression on the euro area.

The situation in the euro area is an exception to my discussion here. There is no centralised pan-Euro Treasury of any significant size, and so the only way of running hefty counter-cyclical fiscal policy might require financing by the European Central Bank.

Many of the proponents of “helicopter money” are European, and are quick to offer the situation in the euro area as an example of the usefulness of helicopter money. Those of us who are non-European have a wider perspective, and realise that we cannot generalise the dysfunctional euro area institutions to other regions.

Finally, I will note my cynicism even concerning the euro area. The European Central Bank was part of “the Troika” which levelled the economies of the European periphery. The ECB is politically unaccountable, and part of the problem of governance on the euro area. Giving an out-of-control, unaccountable organisation with a horrific decision-making track record more power on the theory that the next episode will turn out better seems to be questionable logic.

Overt Monetary Financing is a piece of jargon that just says that the central bank will finance Treasury spending. The alleged advantage is that this lowers the probability of Treasury default to 0%, and so the Treasury can spend without worrying about “fiscal sustainability.”

The rejoinder is that the electorate is allegedly stupid, and they do not understand that governments with currency sovereignty cannot be forced to involuntarily default. My response is that the people backing “helicopter money” are implicitly peddling myths about “financial constraints,” and are part of the problem, and not part of the solution.

In any event, the issue is that the Treasury has to want to undertake the extra spending that is “financed with money.” Since politicians appear to understand government finance better than many economists do, they are likely to be skeptical about such schemes. Instead, they will only spend what they wanted to spend in the first place, and they know that they can achieve such spending using standard government financing techniques.

This leads into the next section, where the central bank takes control of spending.

The central bank can lead the horse to water, but cannot force it to drink. Therefore, there are arguments that the central bank should engage in fiscal policy: transferring money to citizens as part of economic stabilisation policy.

The economic justification is the dreaded “zero bound”: with the policy rate stuck at 0%, the central bank needs to stimulate the economy in order to hit its inflation target. If the economy comes roaring back, the policy rate could be raised, and helicopter money suspended.

Unfortunately, there is no clean way for the central bank to implement such a policy in an independent fashion. The usual way that helicopter money is supposed to work is via the central bank sending “money” to “all” citizens. If the central bank wanted to this itself, it would need to create a bureaucracy to monitor the eligibility of individuals for the programme, which would require large, intrusive surveillance. This is solely needed so that this new organisation can mail out small cheques once per decade (at most).

If a Canadian prairie populist party somehow swept into power, and I was somehow associated with such a government, the very first thing I would do is to move to shut down such a programme on the basis that it is a screaming example of governmental stupidity and waste. One also needs to keep in mind that I am a Keynesian.

Realistically speaking, the programme would need to piggyback on another central government institution that has regular cash transactions with the population. In Canada (and probably most other developed countries), the only infrastructure that meets that definition is the payroll tax withholding system. Tax rates in that system can be tweaked relatively quickly, but doing so does create compliance problems for small businesses if it is done at an irregular time. The reality is that central bank will not be able to adjust those payroll deduction settings in any more efficient manner than the elected government.

The reliance on an existing distribution framework means that the central bank has no reaction time advantage over the Treasury (which is an alleged advantage of policy rate changes). Furthermore, the slowness of the reaction of fiscal policy is greatly exaggerated. Developed countries reacted very rapidly with fiscal stimulus during the Financial Crisis, including the (fiscally conservative) Canadian Conservative Party. Additionally, even if there are implementation lags, expectations matter (to quote our New Keynesian friends). It is very easy to structure tax policies to reward behaviour now, even if the cash reward is delayed (for example, investment/depreciation credits).

We are then stuck with a position that should raise eyebrows: we cannot trust elected governments to enact discretionary policy because they have a structural tendency to keep fiscal policy too tight. The only sensible reaction is: no sale. 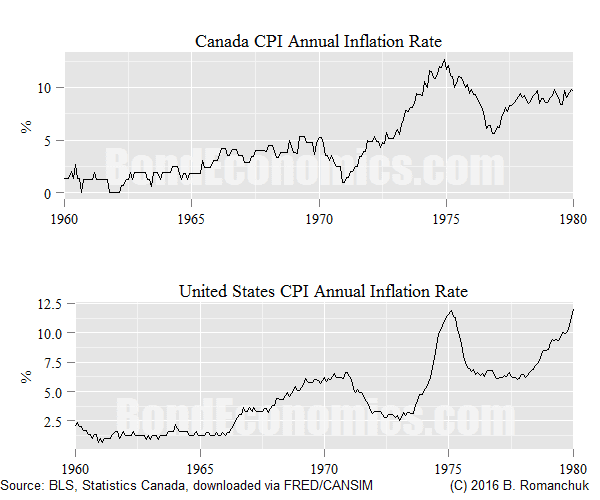 Developed country central banks were given independence to pursue inflation targeting mandates, as mainstream economists had intoned for decades that politicians had a structural tendency to favour inflationary policies. Moreover, there is a reason why people listened to them then: they had a lot of evidence on their side. As the chart above shows, inflation control was not exactly a strong point of the post-war “Old Keynesian” policy mix.

The closest that there comes to evidence in favour of the “helicopter money” view was the flirtation with austerity during the post-crisis era. Of course, we cannot point to the disastrous austerity policies in the euro area periphery, since the European Central Bank was the key enforcer in ramming austerity policies down the throats of elected politicians. If we look at the milder austerity policies in the English-speaking world, one could say that they were wrong-headed. However, that was just politics: worries about government debt were used to justify policies that would have been otherwise unpopular. Conservative politicians were doing exactly what their supporters wanted them to do; and the economic environment was quite favourable for those backers (a decreased wage share of national income pushed up the profit share). In any event, there is little reason to believe that such politicians would continue to support austerity if there was a downturn that was disadvantageous to their backers.

From a central banker perspective, the inflation-targeting framework is somewhat unfair. They have no effective mechanism to raise inflation if the policy rate hits the zero bound. (I am ignoring what mainstream economists the “neo-Fisherian debate”: raising interest rates raises inflation. Central bankers do not believe that viewpoint.) As I tell my kids: life ain’t fair.

In the private sector, employees are commonly given contradictory orders by their bosses. It is up to the employee to figure out what their employer really wants, and deliver that. Central bankers have to accept that politicians have a number of economic objectives, and a symmetric adherence to an inflation target is not politicians’ highest priority.

In the English-speaking world, what we have seen since the crisis is small, persistent errors concerning hitting the inflation target: inflation was closer to 1% than 2% (rounding off the actual numbers). Although that is technically missing central banks’ inflation targets, the political reality is that nobody cares about that.

Obviously, some politicians and voters did not like some of the side effects/causes of low inflation, such as tepid job growth and the squeeze of workers’ share of national income. However, those “side effects” are what they are worried about, not the inflation rate. Nobody sensible cares whether the inflation rate is 1% or 2%, if there are no other changes to the economy. However, the deviations are not symmetric; people would start to become unhappy if inflation heads north of 3-4%, even if no other economic variables are unchanged. The only people that care whether inflation is 1% instead of 2% are New Keynesian economists with a fixation on the “natural rate of interest.”

Returning to central bankers – no politician is going to hold them to account for small deviations below the inflation target, so it does not matter if they are missing on that part of their mandate. As a result, there is no need to open the constitutional can of worms that delegating spending power to an unelected body represents.

It is difficult to see what political economy objective helicopter money achieves. Meanwhile, the belief that central banks need to have the power to enact fiscal policy because elected officials are structurally averse to deficit spending has to be one of the most evidence-free political beliefs that I have come across in my lifetime.