Building A SFC Model In Python

This article demonstrates the first basic application of my Stock-Flow Consistent (SFC) models package in Python: sfc_models. The code is under construction, and needs to be extended in many directions. However, with the core functionality built, adding new analytic capabilities should be straightforward. In this article, I explain how to implement the simplest SFC model -- Model SIM ("SIMplest") -- from Chapter 3 of Godley and Lavoie's Monetary Economics. The key advantage of my library is that the user just specifies the high level description of the sectors of the economy, and the package generates the underlying equations.


The model SIM is the simplest of the models in Godley and Lavoie. I needed to find external validation of the equations generated by my package, and so this was the first real test. (I have extensive unit tests of the code of the individual sectors, but we need to validate that the framework stitches the sectors together in a way that generates equations that can be solved numerically.)

The model consists of three sectors. The Household and Business sectors are tied together by the labour and goods (final output) markets, while government activity just consists of an externally set ("exogenous") demand for goods.

I have already used this model as an example multiple times, so I will not repeat the background information.If you are unfamiliar with this model, please see:

Installation instructions are found here.  (If you are familiar with Python, pip install sfc_models works.)

The code to set up model SIM is as follows:

The package generates a rather impressive set of equations for such a simple model.

The beauty of the sfc_models package is that the algorithm generates the equations, and not the user. This greatly reduces the tedium and risk of error when generating a large SFC model. For example, a multi-country SFC model will have multiple goods and sectors, which creates an extremely large number of variables that look similar, but have to be carefully tracked. 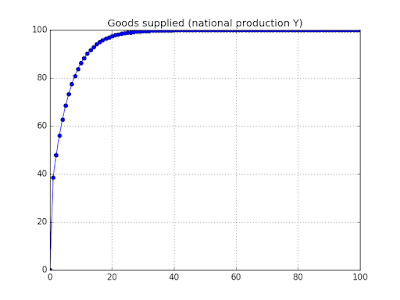 The chart above is generated by running following code (which requires the matlibplot package):


The model solution is done within another file ("out_SIM_Machine_Model.py") which was machine-generated. Although this is somewhat eccentric, it was the safest (and most efficient) way of allowing for fairly general equation forms.

The module sfc_models.examples.scripts.build_SIM_model.py does all the steps involved in building the model.

In order to be more interesting, the sfc_models package will need to add support for more complicated interactions between sectors. I want to finish off my next book ("Abolish Money!"), and will then turn more attention to that task.