The United States of Stagnation 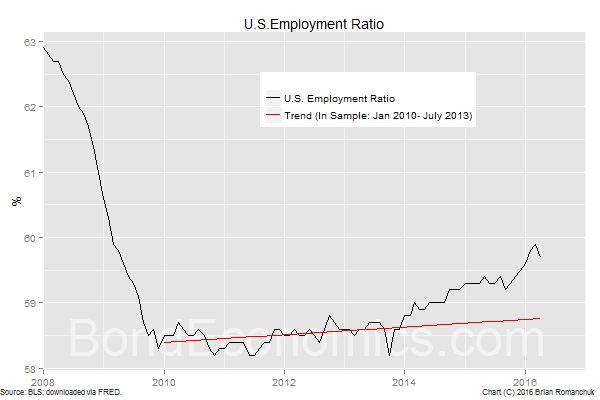 The April U.S. Employment Situation Report was disappointing, but one could argue that the weak result is just the various indicators returning to their previous trends. There is little need for urgency with regards to Fed rate hikes, but I doubt that this will be enough to completely rule out a June rate hike. From a longer term perspective, it is difficult to see the U.S. economy breaking out of its low-growth trajectory.

The chart above shows the U.S. employment-to-population ratio. Although it is has been steadily rising (hence, being inconsistent with a recession), the pace of improvement has been quite slow during this expansion. Admittedly, the pace of growth picked up near the end of 2015; it remains to be seen whether the weakness in the April report represents a reversion to the growth rate seen earlier in this cycle. 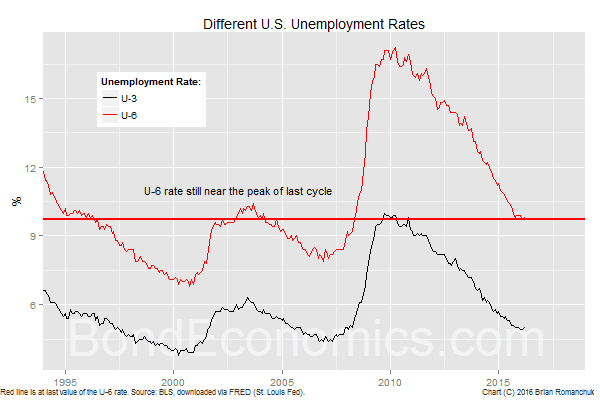 As seen above, job growth and the shrinkage of the participation rate pushed down the Unemployment Rate to 5.0%, where it has been stuck for a few months. For some inflation worriers, this is close enough to the insubstantial level of NAIRU (link to background article on NAIRU) to cause them to proclaim that the labour market is "healed" and there is a need to raise rates.

However, it is clear that the U.S. labour market is fundamentally broken. The U-6 unemployment rate, which is a wider measure of both unemployment and underemployment, is still near the peaks of the post-recession period in the early 2000s. The U.S. economy is not creating jobs to draw in less skilled workers, and they are dropping out of the formal economy.

This does not necessarily mean that the output gap (as it would be conventionally estimated) is still large. It is entirely possible for underemployment to coexist with accelerating inflation; all that needs to happen is for the market for higher-skilled workers to tighten, creating price pressures in some sectors in the economy. As a result, the inflation hawks may have a point about the inflation risks.

Instead, this persistent underemployment reflects sluggish demand, which is why we need to be concerned about "secular stagnation."

Based on my inexpert political watching, it appears that the U.S. Presidential election will feature a showdown between Hillary Clinton and Donald Trump. As a Canadian, I have no desire to comment on which candidate's policies are superior. From the perspective of economic policy, I doubt that the election of either would change the low-growth dynamic of the U.S. economy.

It should be noted that secular stagnation is not an accident; it is exactly what the policy elites in the United States want. Inflation is under control, taxes are low, and the environment is favourable for developing strong corporations. Although politicians pay lip service to faster growth and job creation, the revealed preference is that they do not actually want such an outcome.

Hillary Clinton is the establishment favourite. Her candidacy represents a continuation of the economic trends that have been in place at least since the Presidency of her husband. Correspondingly, there is no reason to expect any trend changes if she is elected.

Although many Democrats have fastened upon the "big idea" of infrastructure spending as a way of kick-starting faster growth, that has been tried before. Much like the current policies of Military Keynesianism, infrastructure spending will just create a handful of highly paid jobs, and probably create resource bottlenecks if the work is done in strong growth areas.

In any event, one of the few things that Republicans agree on is a detestation of Hillary Clinton. It seems highly unlikely that she would be able to accomplish anything in the face of Republican opposition (other than get bills passed that are supported by corporate lobbyists for both parties).

A Trump presidency poses the possibility of change, but it is unlikely that he could accomplish much either. Although his candidacy has taken advantage of the fact that the policy elites are utterly out of touch with the actual concerns of the bottom half of the income distribution, he does not represent a coherent political movement. This is very much unlike the Canadian populist politics that I am familiar with, where there was broad-based movements aiming for very specific policy goals (for example, the Social Credit Party). Since he has no policy base, he will have a very hard time pushing any new policies through Congress.

One growth industry would be the analysis of President Trump's random policy remarks. His suggestions about handling U.S. Treasury debt provides a great example. By making a few questionable remarks about Treasury debt, he triggered hundreds of articles about the U.S. Federal debt.

However, the point is that he could not do anything about Treasury debt, no matter what analogies he draws with his previous experience. He would be hamstrung by Congress, existing laws, and even the U.S. Constitution. (The fourteenth amendment includes: "The validity of the public debt of the United States, authorized by law, including debts incurred for payment of pensions and bounties for services in suppressing insurrection or rebellion, shall not be questioned.") We might be treated to ongoing verbal gymnastics, but without any actual changes showing up on the ground.

In conclusion, we are only likely to see an actual change in the policy regime once there is a political movement that pushes for those changes. Until then, it seems safe to extrapolate the current low growth economic trajectory.

Email ThisBlogThis!Share to TwitterShare to FacebookShare to Pinterest
Labels: Slow Growth, US