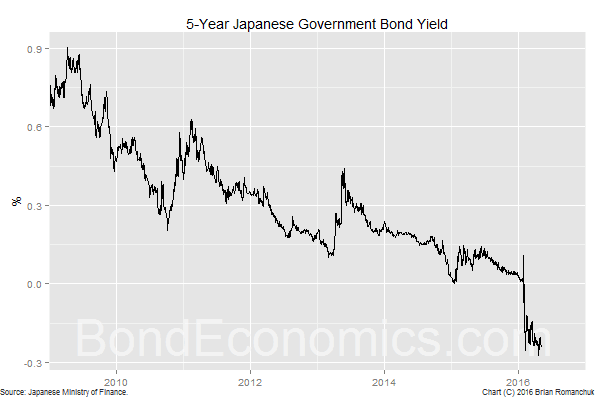 I crashed a wine and cheese event that was associated with the CFA Institute conference in Montréal, and ended up in a discussion with an asset allocator about the implications of negative interest rates. This is a topic that I have not written too much about, but this is because I see the implications as being very limited. The only interesting implication is that it makes the position of fiscal conservatives who worry about debt-to-GDP ratios even more foolish.

We can look at the implications from four different angles:

This article covers these areas in turn.

From the perspective of an asset allocator investor, negative bond yields represent the "pain trade" (the market movement which causes the most grief for investors). They spent the past cycle trying to find "low cost" ways of getting short the bond market, and the market went and rallied on them further. Meanwhile, the duration of their liabilities is lengthening, and so their asset-liability matching position got worse.

They are stuck in what is known as the "shoulda, woulda, coulda" analysis mode -- "we shoulda started matching our liabilities in [insert year before 2014]." As most experienced investors know, this mode of analysis is painful, and completely non-constructive.

Going forward, government bond yields are so far below return targets that the entire concept of liability matching is called into question. The only reason to own bonds is that the alternatives are worse. A German bund -- regardless of the quoted yield -- looks a lot more attractive than a deposit in the euro area banking system from the perspective of the return of capital, when we consider the pathological nature of euro area policymaking.

In other words, it does not matter whether the 10-year yield is 1% or -1%, if you believe that the alternative is a 50% haircut on risk assets.

The ability to push the policy rate to a negative level has made it possible for other central banks to maintain a negative yield spread versus the U.S. policy rate. The idea being that this will help suppress the value of their currencies, and support their trade balances.

If and when the Fed hikes rates further, this justification disappears, and policy rates will probably revert back to zero.

I took an undergraduate elective course in psychology, and one of the few things that stuck in my mind was some of the results from behavioural psychology.

In one set of experiments, chickens were held in cages, and given rewards when they pressed a button. The chickens would learn to follow patterns, or even just learn to press the button repeatedly if the rewards were given on random presses. However, if the rewards stopped appearing, the chickens eventually figured this out, and they stopped pressing the button.

Mainstream economists who are big believers in negative interest rates are playing the role of the chickens in a real-world experiment. How many failures of interest rate policy to revive growth will it take before they begin to revise their world view? Or will they keep pressing the "lower interest rates" button forever?

This will be the basis of very entertaining doctoral theses in 2100.

Negative interest rates do a very good job of blowing the whole "high debt-to-GDP ratios will cause default" theory out of the water.

Since these theories are incoherent, it is hard to summarise them. The idea is that if the debt-to-GDP ratio is "too high," the government has to default (or something like that).

About the only way to get an "out-of-control" debt ratio spiral is to assume that nominal GDP is shrinking. (This is what so-called Neo-Ricardian theory would suggest.) However, such an outcome is incompatible with the government running steady nominal primary deficits. The implication is that the private sector would entirely disappear, which is not an outcome that even remotely resembles real-world behaviour.

The only way of coming up with a bad outcome is to assume that somehow there will be a rapid inflation. How such an inflation would be sustained in the face of the government taxes being levied as a percentage of nominal income, and if not all government spending is indexed, is very unclear. In any event, a rapid inflation would wipe out the debt-to-GDP ratio, which eliminates the alleged initial problem.