The Position Of The U.S. In The Interest Rate Cycle

The outlook for the interest rate cycle in the United States is a humbling experience for modern monetary economics. Mainstream analysis of monetary policy is dominated by a handful of variables that cannot be directly measured, notably the output gap and the natural rate of interest. Unfortunately, the current levels of these variables are highly uncertain. Despite this lack of clarity, the base case view remains that we are still stuck in the middle of an "übergradual" rate hike cycle.

Where Are My Unobserved Variables?

The underlying theme of the theoretical chapter of Interest Rate Cycles was the dependence of mainstream economics on variables that cannot be directly measured. This has the side effect of inoculating the theory against empirical refutation. This tendency reaches its climax in a Taylor Rule, which typically consist of the following terms:
The inflation target is presumably observed (although it can be debated in the case of the Fed), but the remaining terms rely on econometric estimation. Even inflation expectations -- which theoretically can be directly observed from inflation-linked bond pricing -- can be doctored to give whatever result an analyst desires via the use of affine term structure models. Although a reasonable person might argue that breakeven inflation rates below target (chart below) imply that Fed rate hikes are a policy error, hawks can pull an affine term structure model out of their hat to show that inflation risk premia are somehow negative, and that inflation expectations are stable. 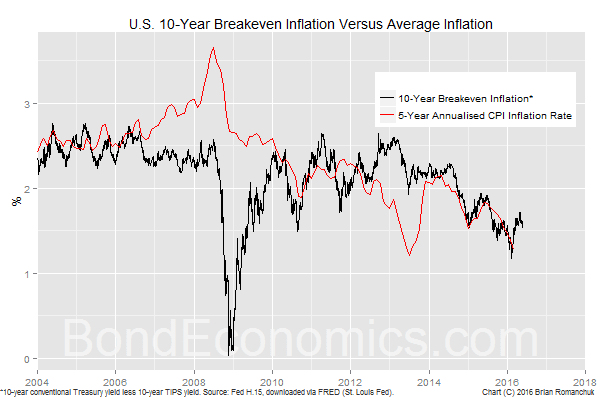 The main scare story used by hawks over the past five years was how the downtrend in the unemployment rate implied that the economy was going to reach potential (an output gap of zero) and inflation was going to take off any minute. As shown below, even that story has lost steam, with the U-3 unemployment rate stuck in the range 4.9%-5.1% for the last 9 months. The upcoming Employment Report will give new information, but it is unlikely that the trend will shift materially. 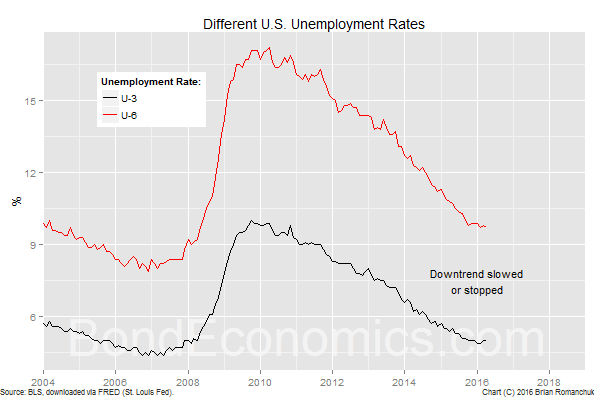 The underlying message from the theoretical viewpoint is that übergradualism is the way forward. Inflation is stable, and growth is stuck in a low-growth path. Any reasonable estimation procedure for the hidden variables driving mainstream models will tell us that rates are near some form of equilibrium; rates can only be nudged up at a very slow pace.

Although there is always for short-term excitement in bond market pricing, the movements in bond yields are likely only to be measured in dozens of basis points, not hundreds. Regardless of whether the money markets are pricing the next couple of Fed meetings correctly, the short-term path of the overnight rate is not consequential for the pricing of long duration instruments. Unless the Fed suddenly starts hiking rates at every meeting, it will take years for the overnight rate to hit the current level of 10-year Treasury yields. This allows plenty of time for a recession to halt übergradual rate hikes. Correspondingly, the bond market is likely to remain locked in range-trading mode.

As discussed in Interest Rate Cycles, mainstream economic theory has nothing useful to say about the possibility of recessions. (There has been a lot of mainstream empirical work on recession probability indicators; the number of data points is too small to judge the success of those efforts.) If we assume that economic outcomes are the result of optimal plans of a single household, it is hard to come up with a reason for economic activity to plunge in a short period of time.

Meanwhile, post-Keynesian economics has little difficulty in explaining recessions -- they are the result of collapsing fixed investment (along with financial market instability). The trick is identifying the candidates for sectors that are ripe to cut back on investment and hiring. 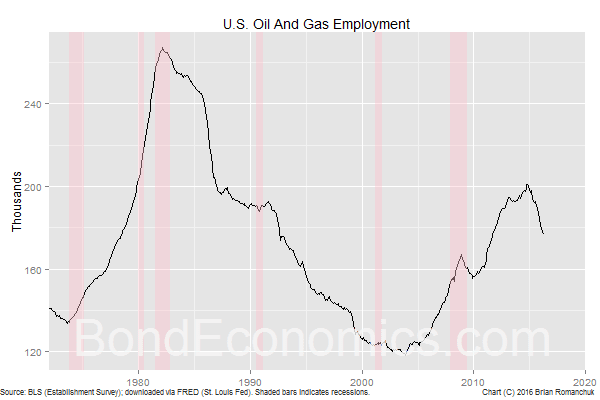 There are certainly sectors of the economy that are weak; the oil and gas industry has been in a sectoral recession for a period of time (chart above). So far, this sectoral weakness has not hit aggregate demand enough to force an economy-wide recession. Although energy sector jobs pay well, there is not enough of them for the job losses there to move the needle of aggregate job growth.

Since the woes of the energy sector are unlikely to accelerate at this point, the downward drag on growth peaked. At this point, it is unclear what other domestic sectors are candidates for a pullback. As a result, the main recession risks for the United States appear to emanate from overseas.