The Track Record Of Recession Forecasting

One of the more entertaining robust empirical observations in economics is the inability of the consensus to forecast recessions. However, we need to move beyond name-calling, and accept that this tells us something about recessions. From the perspective of post-Keynesian economics, an inability to forecast the timing of recessions is roughly what one should expect. Since recessions are the most significant part of the cycle, this inability calls into question naive beliefs that economics can be “scientific” in the same manner as short-term weather forecasting. 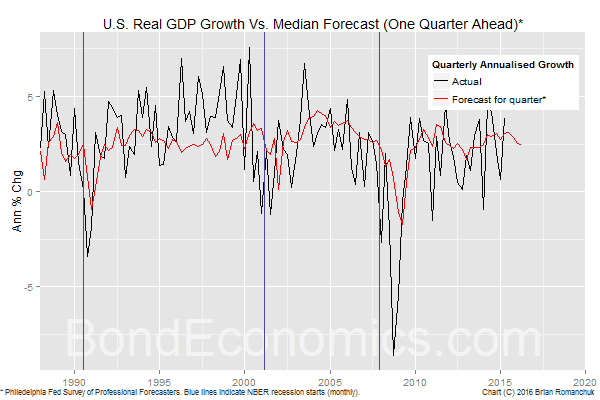 As shown in the chart above, the median forecast for the quarter-ahead real GDP growth rate was just above 2% in each of the three last recessions. (The survey used was the data from the “Survey of Professional Forecasters” recorded by the Philadelphia Federal Reserve.) In the chart, the blue lines indicate the monthly start dates of recessions (as determined by the NBER recession dating committee), while the time series are for quarterly annualised real GDP growth. The forecast series is shifted to correspond to the date of the forecast; for example, the value of the survey taken in the fourth quarter of 2014 is plotted in the first quarter of 2015.

The chart focusses on the start of the recession, as the remainder of the recession is obviously a greater challenge for forecasting. There is typically a “V-shaped” recovery in growth once the recovery starts, and the economy will typically regain a large percentage of the lost growth. Forecasting the growth rate in the recovery is nearly impossible, since we do not have reliable estimates of the extent of the downturn in real time.

For the other non-recessionary periods, I would not be particularly concerned about the accuracy of the median forecast. The survey forecasts were based on real GDP as was reported at the time, whereas the historical series shows takes into account revisions to the data. There are one-time effects in GDP estimates that reliably reverse themselves, and so one-period ahead forecasts will incorporate such reversions. Meanwhile, the entire blip might be revised out of existence in later versions of the GDP series, and so the forecast reversions no longer correspond to anything in the data.

Although it is entertaining to poke fun at highly paid economists who reliably get the most important forecast wrong, we need to dig deeper. The professional forecasters in the survey are not academics who can stick with failed methodologies because they are protected by academic politics–they are going to use the best forecasting tools available. The implication is that it is very difficult to call the timing of recessions. Since modern cycles end in popped bubbles, it is straightforward to say, “This will end badly–eventually.” However, even patently ridiculous bubbles can avoid popping for a long time. Nevertheless, there is also an underlying hopeful message for analysts. You do not need to have a “good” forecast; you just need a “less bad” forecast than the consensus. In the Financial Crisis, it was not that hard to realise that the global economy was going off the rails before the collapse of Lehman Brothers made that fact clear to everyone.

This inability to time recessions is what post-Keynesian economics predicts. An inability to get recession forecasts right is only an intellectual puzzle to strong believers in rational expectations (that private sector activity is based on forecasts that are on average correct). I will discuss the post-Keynesian reasoning later, but the core of the argument is straightforward. The future is shrouded in uncertainty, and that uncertainty cannot be reduced to a well-defined probability distribution for future growth.

If we are looking at the accuracy of recession forecasts, central banks get a free pass. Central banks are amongst the best sources for economic forecasts, but they are politically incapable of forecasting recessions. Although I have little patience with theories that state that the central bank can magically push economy variables to desired levels by managing expectations, there is a grain of truth behind that idea. Central banks are regulators, and are privy to a good deal of “inside information” concerning the financial system. Given the linkage between financial crises and recessions, a panicking central bank provides a very good justification for panicking yourself; as a result, there could be self-fulfilling downward spiral in activity. As a result, any sensible economist working at a central bank that forecasts a recession only reveals that forecast to policy makers verbally and off-the-record. Since we have to expect self-censorship by the central bank, we cannot expect anything other than their forecasts missing recessions.

Finally, one might ask–why does institutional research have well-known analytical biases? Should not market forces eliminate bad forecasting methodologies? The reality is that the institutional clients of external researchers (such as bank economists) are not particularly concerned about their accuracy. No investor could attract investment mandates if blind reliance on external research was a core investment tool; moreover, not doing your own research could easily be construed as a breach of fiduciary duty. Instead, “street” research is used to generate ideas, and to call into question embedded assumptions of your own investment processes (and if you are a big enough client, it is easy to call up the economists to ask questions). Moreover, the entertainment value of macro research may be more important than accuracy. This is not entirely frivolous–all investors have to give presentations themselves, and fixed income research tends to be somewhat less than exciting. Finding interesting charts to liven up your own presentations is part of the job requirements of a fixed income analyst.

This article is a non-edited draft from my upcoming report: Interest Rate Cycles: An Introduction.