Economic data are available in discrete time; that is, they are time series that are available in the form of samples at a fixed frequency (for example, quarterly, monthly, daily). Similarly, most complex economic models are specified in terms of a discrete time specification. By contrast, models in physics, or things like analog circuits, are defined in continuous time: time series are defined at "all times" (the time axis is a subset of the real line). Building economic models using continuous time has been done, but doing so creates many problems. However, one of the issues with discrete time models is the choice of the sampling frequency: too low a frequency means that you might not be able to model some dynamics.


Systems engineers were forced to develop the theory of sampling in the post-war in response to the rise of digital electronics. All electronics are in fact analog (continuous time), but in a digital circuit, we have taken the convention of ignoring the value of signals except during the short periods when a timing circuit is active. We can therefore get away with treating the system as stepping between discrete points in time. 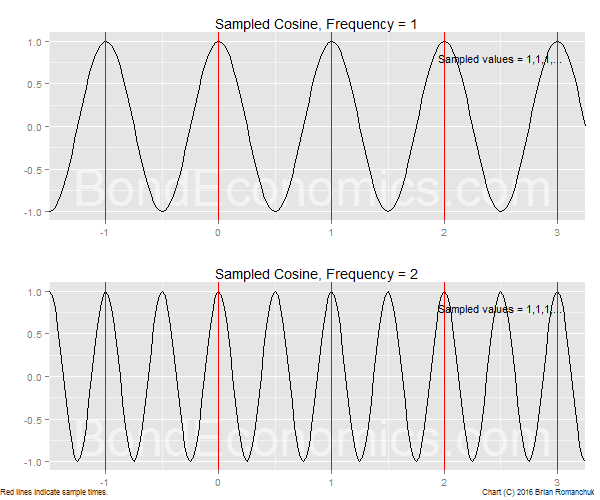 The chart above illustrates the mathematical operation of sampling. We have decided to sample two time series at a frequency of 1 hertz, that is, every second. The two series are two pure cosine waves, with a frequency of 1 and 2 respectively.

The red lines indicate the sample times, (t = ...,-1,0,1,2,...). The sampled discrete time series are defined by the value of the input continuous time series at those time instants.

We immediately see a problem: both sampled series are given by the constant series 1,1,1,... Under sampling, we cannot distinguish these series, nor can we even distinguish them from a pure constant.

A full explanation of this effect requires diving into frequency domain analysis techniques. But to summarise, a sampled series can only reproduce the low frequency components (the "spectrum") of the input signal; the range of reproduction is the set of frequencies [0,f/2), where f is the sampling frequency.  In other words, with the sampling frequency of 1 in my example, we can only distinguish sinusoids with frequencies less than 0.5.

Higher frequency components do not disappear, they are "aliased" into a lower frequency. We see this in the example: the two high-frequency sinusoids effectively turn into constant signals, with a frequency of 0.

Luckily for control systems engineers, the physical dynamics of engineering systems are at a much lower frequency than the timing frequency of digital electronics. The fastest moving dynamics in an aircraft air frame are on the order of 10 hertz or so, whereas even 1960s era digital electronics ran at kilohertz frequencies (thousands of samples per second). The physical components are effectively "standing still" when compared to the electronics, so engineers can get away with some fairly basic approximations when translating a continuous time model to discrete time model. The high frequency dynamics created by sampling have no interaction with the physical system model, given the large gap in frequency responses.

That said, possession of an engineering degree does not mean that you will get it right. I was an anonymous referee on a paper written by three control systems engineering academics which developed a control strategy for a discrete time model. They took a standard control systems laboratory system (an inverted pendulum), sampled the model using a standard approximation, and then applied their control law to that discrete time system.

It looked good (at least to them) in discrete time. However, when I translated what was happening back to continuous time, I found that the tip of the inverted pendulum was whipping around at a significant fraction of the speed of light. Needless to say, I suggested that this was perhaps not the best way of designing control systems.

Returning to economics, we see some problems created by sampling. Economic models are often developed at a quarterly frequency (4 samples per year), which is a lower frequency than quite a bit of economic dynamics. For example, we see a seasonal ripple in many time series (for example, consumer spending around Christmas), which we cannot hope to capture in at a quarterly frequency. Importantly, American recessions are often dated to be only a several months in length (5-8 months, say), which is hard to translate into a quarterly time series. Within a recession, there is a downward self-reinforcing slide in activity, which is then arrested by the action of the automatic stabilisers. Capturing such differing dynamics in 1-2 time samples seems to be a difficult problem, particularly the action of the automatic stabilisers (which require deviation away from trend growth, presumably for more than one time point).

The inability to capture such fleeting dynamics may be one reason why many mainstream models are biased towards assuming that private sector activity is inherently stable. Since unstable dynamics disappear at the standard quarterly frequency, they cannot affect parameter estimates by definition.

The area of theory which faces the greatest problems are overlapping generations (OLG) models. In some classes of these models, a single time point is a "generation," and an individual lives for 2 or 3 periods. This implies a sample period of at least 20 years, which eliminates practically all  business cycle dynamics.

I am not a fan of OLG models, as I discussed in earlier articles. Essentially, they are a way to put forth dubious theories to justify austerity policies; since the business cycle is eliminated, it is impossible to properly analyse the effects of fiscal policy and government debt. This is essentially how the mainstream found a way to ignore Functional Finance (which argues the way to gauge the effect of fiscal policy is to look at how it affects the business cycle): completely change the subject.


Not Just For Models

My comments here are not solely aimed at formal "models," even economy-watchers need to keep this in mind.

The NBER in the United States dates recessions using monthly data. This is certainly a better approach than the "two quarters of declining real GDP" that is used in other countries. In a slow growth environment, it may not be that hard to trigger two consecutive declining quarters, even though the slowdown was not material. Quarterly data are often quite rich, but they may be available with only too much of a lag to be useful.

Going to a higher frequency above monthly is also difficult. There are only a handful of series available at higher frequencies (job claims, monetary statistics), and they can easily be disrupted by unusual holidays or weather. We need to wait for monthly data -- which naturally tend to smooth out very short disturbances -- in order to confirm what weekly data are telling us.

This article is partially a response to claims made by the physicist Jason Smith in the article "More like stock-flow inconsistent."

He summarises his argument as:


TL;DR version: ΔΔ in SFC models [Stock-Flow Consistent models] has units of 1/time and therefore assumes a fundamental time scale on the order of a time step.

As discussed above, any discrete time model has a "fundamental time scale" on the order of one time step; this is not a particular property of SFC models.

He complains that SFC model proponents describe their models as "just accounting," which misses how SFC modellers describe their modelling strategy. The initial hope was that the majority of model dynamics would be specified by the accounting relationships, but reality intervened: it was clear a long time ago that "behavioural" relationships matter a lot. Unfortunately, even superficially similar models could end up with quite different dynamics as a result of small changes to behavioural rules. We can use SFC models to gain an understanding of the economy, but we need to be realistic about what can be accomplished with reduced order models.

Smith advances what he calls "information transfer" models. They are largely based on analogies to models in physics. Unfortunately, he buries his discussion in a layer of physics (and his own) jargon, even though there is limited reason to believe that this will help the comprehension of readers who are not physicists. I have attempted to follow his logic, and I have had a hard time discerning the advantages of his suggested methodologies.

Continuous time models also suffer from other defects.
The most imposing problem facing his suggested continuous time methodology is his embedded belief that we can learn something about aggregate economic behaviour from disaggregated individual transactions. The "microfoundations" belief of mainstream economics argues that we can; but the general failure of the mainstream to develop realistic models based on those microfoundations calls into question that belief. There is little reason to hope that we can capture the properties of macroeconomic aggregates starting from the level of individual transactions.

Once we start to study economic aggregates, we are dealing with aggregated transactions across accounting time intervals. The behavioural relations that we get will end up as approximations, and those approximations may vary based on the sampling frequency.

The sampling frequency of a model matters, and modellers should spend some time questioning the effect of  the chosen sampling frequency. That said, it is unclear whether using a higher frequency beyond monthly will add any value for macroeconomic models. Quarterly frequency models are likely to be acceptable, but they may miss the unstable dynamics around recessions.

Email ThisBlogThis!Share to TwitterShare to FacebookShare to Pinterest
Labels: Models, Stuff I Read On The Internet, Wonkish