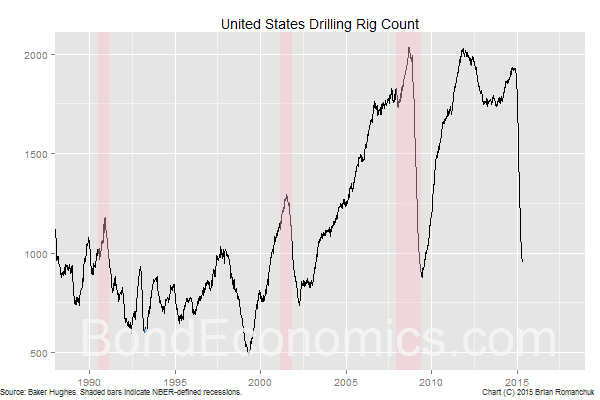 The economy in the United States is not particularly buoyant, but it is doing better than I would have expected given the collapse in oil and gas drilling activity. Despite all of the wrangling over economic theory, it offers little insight into the state of the economy right now, never mind forecasting what will happen in six months. I believe that this is the result of the fact that we have to think of the economy using a number of models, and those models can disagree.

This article is somewhat of a followup to my previous article. The trigger was an article by Professor Noah Smith, who argued that mainstream Dynamic Stochastic General Equilibrium (DSGE) models have obvious defects now, but they represent a future path to knowledge. In my view, he is exposing a bias that comes from his training in physics.

In an earlier article, he noted that physics training has limited advantages when coming into economics.  He wrote:


A physics background will not help you in econ as much as one might imagine. Actually, this is true not just of physics, but of all subjects, math and computer science included.

I believe that his statement about "all subjects" is incorrect; he ignores a relevant area of enquiry: engineering. Physicists routinely work with highly idealised assumptions to get elegant models (frictionless surfaces and so forth). Professor Smith seems to hold the hope that such idealised models will eventually work in economics. Conversely, engineers have to build real world systems, and they do not have access to the frictionless surfaces that physicists assume into existence. Any good engineer knows that some sort of model is needed, but it may not conform to theoretical principles, nor be very elegant.

For example, most control systems theory is built around linear system models. This sounds restrictive, but what is done in practice is to determine linear approximations of system dynamics at different operating points. A stickler would correctly object that it is impossible for two linear systems to be linked in such a way (since a linear system is linear over the entire state space). But if you have ever flown in a modern aircraft, you have just had a visible demonstration that this can be done, and in a reliable fashion.

The key is that you cannot take your models too seriously, and you have to know where they break down.

The strategy of DSGE modellers is to keep proposing new model mechanics, which appears superficially similar to the engineering strategy of multiple linearisation. The problem is that they are ignoring the large pre-existing literature on the mathematical properties of dynamical systems. DSGE models generally end up being linearisations with dozens of free parameters, and several unmeasured state variables. When these models are fitted to the same date sets, you expect to end up with the same model (with just a cosmetic linear transformation of the state variables).

Improvements come by adding "dummy variables". In each economic cycle, existing models will blow up when a recession hits. The solution is to add a new variable that is only significant in that cycle, so it can explain the deviation.

This is obviously a dead end, but I fully expect that mainstream economists will persist with this modelling strategy until the decks of academia are cleared one way or another.

I believe that Stock-Flow Consistent (SFC) modelling is the way forward. One could attempt to create a single "supermodel" which explains everything. My feeling is that such a model would have too many free parameters (almost as many as a DSGE model), which would making a fit to data highly problematic. We need to approximate such a supermodel with lower order models, which are easier to deal with. I would suggest three classes of models are useful. 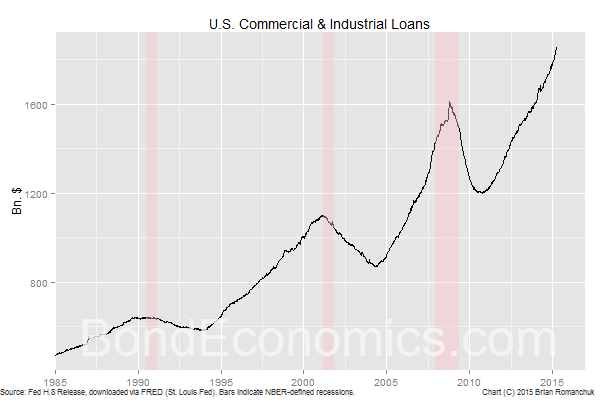 My labour market analysis is largely based on a mental model that is built around "steady state" growth. The chart above, of Commercial & Industrial ("C&I") loans is another example of steady growth trends during an expansion. Since the automatic stabilisers (which includes the effect external sector, most of the time) do a very good job of smoothing out wiggles in activity, we get behaviour that is remarkably similar to that of linear model during an expansion. It was no surprise that straight line extrapolations for the Employment Ratio and the Unemployment Rate were fairly accurate; linear extrapolations are supposed to work within a linear model. 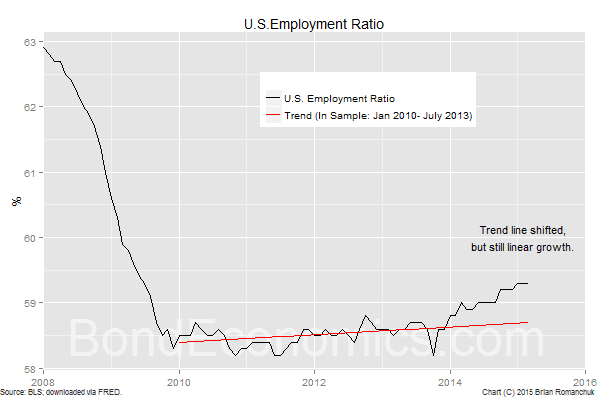 Since we are in "steady state growth" most of the time (since 1990, at least), linearisations of DSGE models should pick up this behaviour. This is why they can pass the few statistical tests that they do. A linearisation of almost any model with enough free parameters would be able to do the same.

The only problem with this class of model is that it is too stable, and has a hard time to generate recessions.

It is not had to modify one of the steady state models I describe above to turn into an investment-accelerator model. All we need to do is make private investment and debt financing strongly correlated with profits. Using the insights of Keynes and Kalecki, increasing fixed investments increases profits, and the private sector has a tendency to "melt up". (It then has a tendency to go the other way when investment is falling, unfortunately.)

This is relatively well known by now. This makes the collapse in drilling activity in the United States (pictured at the top of this article) particularly scary. So far, the automatic stabilisers appear to be winning at the national level (oil-producing regions are a different matter).

What separates this class of models from the previous is that they are critically dependent upon the state of business confidence - Keynes' "animal spirits". Forecasting this non-measurable variable is quite difficult (until it is too late). The inherent difficulty of forecasting "animal spirits" within this class of models gives a formal reason why we will not be able to develop a reliable single model for the economy.

My feeling is that the best we can do is to monitor trends in investment, and see whether dynamics are developing which can overwhelm the automatic stabilisers.

From the perspective of the United States, the external sector tends to help stabilise the economy. As it grows, there is a tendency to import more, which acts as a drag on GDP (and vice-versa). Meanwhile, American multinationals typically operate in foreign countries directly, and are not reliant upon exporting from the United States itself. There is less of an export-driven growth dynamic than is the case for other countries.

Attempting to model all of the interaction in all of the world's economies seems like a fairly hopeless task, never mind the complication of things like "geopolitical risk". Once again, this creates uncertainty around the outcomes that are predicted by an "automatic stabiliser" model.

As an aside, euro zone policymakers are doing their best to blow up automatic stabilisers around the globe at the time of writing. There now seems to be a resignation that Greece is going to default upon its official creditors, and the damage is likely to be "contained" with capital controls. However, what does not appear to have sunk in that if Greece imposes capital controls, it will have its own currency. Canada and the United States use the "dollar", but they are not the same currency. Once capital controls break the linkage of "Greek euros" to "other country euros", "Greek euros" will be traded in the same way as any other currency that has capital controls. Presently, euro notes and coins are common between Greece and "other countries", but that mechanism will be shut down if the capital controls are not removed in short order.

Since I find it hard to believe that a Greece that defaults on its official creditors will be welcomed rapidly back into the TARGET2 system, at some point the Greeks will be forced to print "Greek euro" notes (probably for a "temporary period").

There is little reason to hope that a tractable model could be fit to both steady state and recessionary economic data. Attempts to do so should be expected to fail.