Update On Profits And Inflation 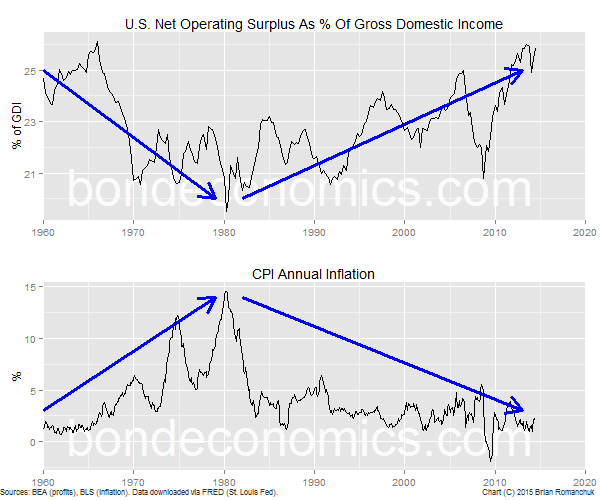 In the post-war period, there has been a strong secular relationship between inflation rates and the share of national income. In summary, corporate profits were at their lowest share when inflation was the strongest. As I noted in Low Inflation, High Profits, this relationship call into question the political neutrality of central banks' low inflation mandates. However, this is a topic of discussion that does not come up too often.


An example of the political attacks one could make on these policies is provided by Dean Baker in the article Profit Share Drops in 2014. (Please note that he refers to a different measure of corporate profitability than I am showing above; I show the "Net Operating Surplus" which is profit margin measure, and is before many deductions that are needed to arrive at profits. The profit margin is the complement to the wage share of national income, which is why I chose it.)

Folks may point to a similar rise in profit shares in the earlier part of the last decade. For those old enough to remember, this also followed the collapse of an asset bubble. And contrary to popular belief, the resulting recession was actually very severe from the standpoint of the labor market. We did not get back the jobs lost in the downturn until January of 2005. This was the longest stretch without net job growth since the Great Depression, until the current downturn. In short, weak labor markets lead to high profits.
This takes us to the Federal Reserve Board. The plan to raise interest rates is a plan to weaken job growth. And, it looks like it also might mean a plan to prevent profit shares from falling and wage shares from rising.
That might sound like bad news to most folks, but of course most folks will probably never hear it. We'll just hear highly paid economist types wringing their hands over the rise in inequality. No doubt the major foundations will make large grants to researchers trying to understand the problem.

The logic outlined by Dean Baker is convincing, but my feeling is that there have been a number of other factors that also raised profits at the expense of the labour share of income. As a result, although it appears somewhat satisfactory that central bankers pay for their hubris during the "Great Moderation" episode, I do not think low inflation policy must be reversed to raise the standing of workers.