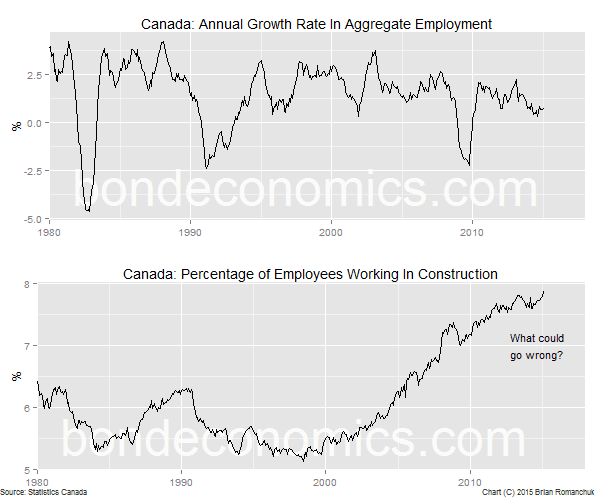 It looks like the Canadian economy has run over the cliff; all that remains is the fateful moment when it is time to look down. The February Labour Force Survey was at best mediocre, but the ugliness lies in the details. Over the past year, 130 thousand jobs were created (a 0.7% annual growth rate), but 43% of those jobs (56 thousand) were in the Construction sector. The travails of Canada's oil and gas sector are highly publicised, but the collapse in construction employment is what will cause Canada to replicate the United States' downward spiral in the last recession. 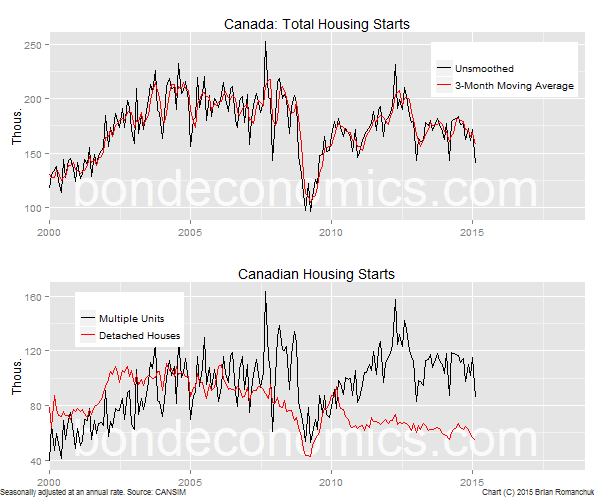 There are have been previous dips during the cycle, as the data are somewhat noisy. And as I can personally attest, this winter has had unusually horrific weather, even by Canadian standards. Therefore, we would need to see a longer run of data to conclude that the end has been reached.

I should note that a total collapse of the Canadian economy is not inevitable. There could either be a miraculous improvement in foreign demand for Canadian exports, or else fiscal policy tightening could be reversed. That said, I am not seeing a lot of catalysts for improvements in the outlook beyond the ongoing rout in the Canadian dollar (which will damage net exports in the short run due to the "J-curve" effect).