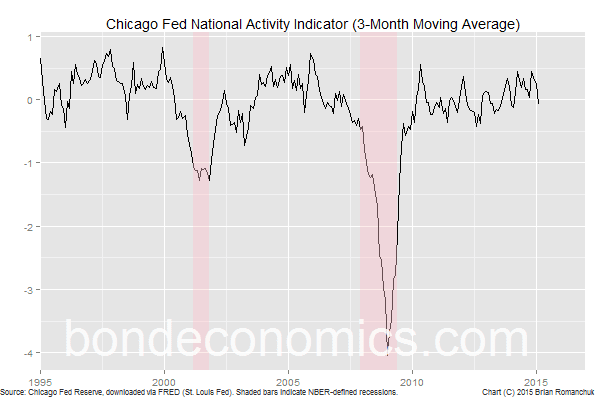 With the U.S. policy rate locked at zero and no Quantitative Easing in sight, reporters and commentators on the monetary policy beat have to dig really deep into the barrel in order to find content. Some of the latest kerfuffles around "lift off" (the first rate hike that pulls policy rates firmly away from zero) illustrate this. In summary, if the-Fed wants to hike rates, they will be able to do so. Moreover, I doubt that any rate hike trajectory will meaningfully depart from the previous policy of an average of 25 basis points a meeting.

As always, my discussion here is conditional upon lift-off actually happening. The self-immolation of the euro area and the oil patch, and the rise in "King Dollar" may put a damper on those lift-off hopes. The chart above, showing the Chicago Fed National Activity Indicator (3-month average, described here), indicates that the economy has hardly reached "escape velocity". But like the reporters, I need material to discuss.

In the Reuters article Fed market gurus prep rate hike amid last-minute anxieties, Jonathan Spicer runs through some standard worries about rate hikes. My feeling is that this article provides another data point regarding our society's elevation of credentials, specialisation and cleverness over common sense.


The Fed has put on a brave face that it can smoothly lift rates from the current range of zero to 0.25 percent. Fed Chair Janet Yellen told a congressional panel last month that she is confident about maintaining "reasonable control" of short-term yields.
The question is whether the fed funds rate will slip below the "floor" created by ON RRP [Overnight reverse repurchase agreements], likely to be set at 0.25 percent after liftoff. The "ceiling" will be a rate the Fed pays banks on excess reserves, called IOER, likely to be 0.5 percent.
Traders and policymakers alike expect volatility.
Many also expect the fed funds rate to slip toward and even below the floor at the end of quarters and months, when money funds will look to the repo facility to dump cash in exchange for Treasuries, pushing rates lower.

As I recently discussed in a recent article on monetary operations, repos* (repurchase agreements) are the dominant position-making instrument in the modern financial system. They have an advantage versus Fed Funds as repos can be used by the entire financial system, whereas Fed Funds trading is only open to banks. Since repos against Treasurys are available to everyone, they are the de facto marginal risk free rate of return in the economy.

Let us now turn to the meat of the worry. The worry is that this overnight rate can depart from its target range periodically for a day or two.

Near the end of the article, he writes:

Another risk to liftoff is a possible overseas crisis that brings a rush of capital into safe U.S. assets like Treasuries, which would depress yields just as the Fed is pushing the other way.

This echoes the famous "conundrum" of the last cycle, when economists and bond bears were shocked that long-term interest rates did not rise one-for-one with the policy rate. However, that's exactly how the bond market was supposed to act. I am highly skeptical of supply and demand arguments about the determination of the level of interest rates (spreads versus benchmarks is where I can see supply and demand being more important). In any event, since bond yields then were massively higher than realised short-term rates thereafter, there is no way of disentangling the effect of supply versus the possibility that "the bond market was right" (and the economists and bond bears were wrong).

It seems safe to predict that if and when lift-off hits, the "conundrum" story will reappear in some form as soon as the initial shock has passed.


The Path Of Rates

Finally, there has been some discussion about the path of rate hikes. Fed Vice Chairman Stanley Fischer stated the following within a speech given on March 23rd (link to speech).


One might even look back to the period from 2004 to 2007 and conclude that the FOMC will raise the federal funds rate by 25 basis points every meeting, or every second meeting, or every third meeting, depending on the date of liftoff.
I know of no plans for the FOMC to behave that way. Why not? Isn't that what the calculation of optimal control paths shows? Yes. But a smooth path upward in the federal funds rate will almost certainly not be realized, because, inevitably, the economy will encounter shocks--shocks like the unexpected decline in the price of oil, or geopolitical developments that may have major budgetary and confidence implications, or a burst of greater productivity growth, as the Fed dealt with in the mid-1990s.

To say that he states the obvious is an understatement. Only the most dedicated bond bear would believe that the Fed would hike rates every (second) meeting forever. At some point, they stop hiking, and then they will be forced to cut rates in a panic as the financial system manages to blow itself up (again).

The Fed's median internal forecast for the Fed Funds rate at year end 2016 is around 2% (as taken from the "dot plots"). If we assume a lift-off at mid-2015, there are 12 Fed meetings from then until mid-2016. That averages out to less than 25 basis points a meeting (if that 2016 rate prediction is correct). Unless the Fed revives the 1/8% interest rate increment, there's not a whole lot of ways of arranging a hike path that does not end up being effectively the same thing as 25 basis points a meeting.

They could hike by 50 or 75 basis points in a meeting, and then pause. This describes how the Fed hiked rates during the 1994 cycle. Some people might think that this lack of regularity will somehow cause a similar bond rout. I doubt that analysis; the reason why the 1994 cycle was a serious bond bear market was that the bond market expectations were too complacent at the state of the cycle, and the policy rate was hiked a lot. I would argue that a sustained bond bear market similar to 1994 would only occur if it became clear that the Fed Funds rate was going to 4% (or higher). Hiking by 50 basis points and then pausing for a meeting will yield exactly the same average path as 25 basis points per meeting, and rate market participants would adjust to it quickly. (Equity strategists might scream about it, but they are not exactly noted for their clear analysis of monetary policy.) 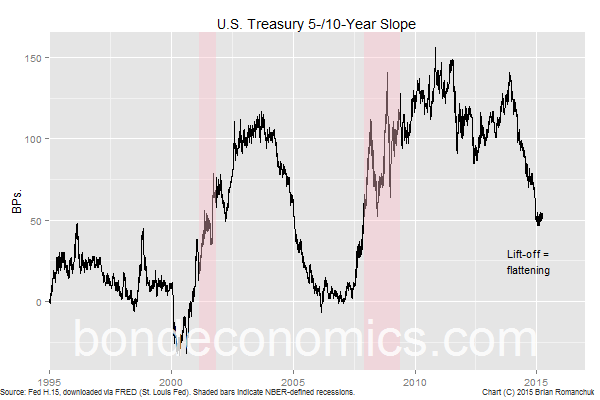 A lot of market commentators and participants have latched onto the theory that the regular pattern of rate hikes in the last cycle led to the risk-taking that blew up during the financial crisis. In my view, this "the Fed made me do it" theory is just a lame attempt to deflect the blame on the crisis towards government bureaucrats away from financial market participants who lost their ability to control or even measure risk.

A more irregular pattern of hikes might raise interest rate implied volatility, and that would raise the "fair value" spread for conventional mortgages. This would help damp what little bullish sentiment exists in the housing market, but this is unlikely to make much of a difference. My view is that this would just accentuate the flattening beyond the belly of the curve (5-7 years).