Peak Oil And The Cycle

One of the things that are often misunderstood about "Peak Oil" is that it is not a prediction that oil prices will rise up in a straight line. Recent events have definitely thrown cold water on that interpretation. I will make a brief explanation why "Peak Oil" is not proven incorrect by the latest price swoon, and some comments on the economic effect of cheaper oil. I do not know whether the positive or negative effects are greater for the United States, but I think the reaction of the Canadian dollar provides a good read on the situation in Canada. 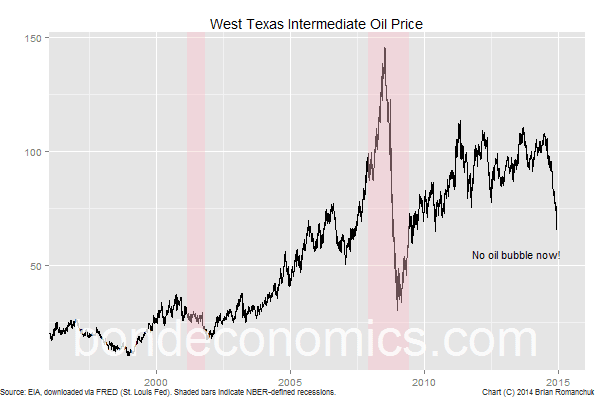 What I view as the most important components of the Peak Oil school of thought are:


The implication of these arguments is that global energy production will peak, and then decline. Note that some of these are negative arguments ("no technology fixes exist") which cannot be proven to be true; all that can happen is that they can be proved wrong. Despite decades of work on alternative energy, they are still holding up.

The collapse in oil prices will neuter new investment, and so oil production will put in another peak within a few years, and then roll over. Depending on the trauma experienced by fracking operators, we may not see such exuberance in drilling for quite some time.

If the global economy was growing strongly, energy demand would presumably rise as well. This rising demand would run into the plateau-d supply, and higher prices is what one would expect. This is what happened in 2008 (although speculation likely helped).

Falling prices are therefore easy to explain - the global economy, hence energy demand, is not growing very fast. Most estimates indicate that there is a surplus of about 1 million barrels a day, or less than 2% of daily production. Once storage facilities are filled up, an excess of production poses obvious problems to prices. For a variety of reasons, no producer is willing to cut production, and all that we can do is wait until some big producer fails financially, and takes out the excess production. Alternatively, demand could rise rapidly, but it would be difficult for demand to catch up to what is happening on the supply front.

(I would note that Warren Mosler has a different take on the oil situation. He argues that Saudi Arabia acts as a price setter, and essentially administers the price of oil. There are limitations to this control of course, and there can be considerable divergences between different regions and grades of crude. His analysis of the futures curve shows that there is a spot shortage of oil. I do not have enough information or experience to disagree with him. However it seems safe to say that Saudi Arabia would not be able to drive drown the price to this extent in an environment of strong global demand for oil.)

Given the contractionary biases of policymakers in the developed countries, this situation could be sustained for some time. But like the 1990s, this will only offer a temporary respite from what is happening on the supply side, particularly if exploration is cut back.


In a place like Japan, falling oil prices appears to be quite positive for the domestic economy. The only risk for Japan is its export industry. However, it will be difficult for yen weakness to be sustained in the face of falling oil imports.

The situation in the United States is more complex. There are some offsetting effects:


I do not have the data to make a good estimate of what the net effect is. Historically, the bullish factor was the most important, since energy investment had been small for decades. The increased size of the energy sector means that any simplistic regression of energy prices on GDP growth will be misleading.

The effect of any high yield defaults is even harder to judge. The dollar amount of potential defaults are almost certainly trivial when compared to the aggregate credit risk in the fixed income complex. But it seems that a cluster of defaults causes complete disarray amongst high yield investors, and a general flight-to-quality episode could take hold. One would think that investors would have learned lessons from the financial crisis, which was less than a decade ago. But as would be expected of a follower of the economist Hyman Minsky, I am not too optimistic about investors' aggregate learning abilities.

So far, I see no reason to throw in the towel on the somewhat hawkish scenarios I outlined in my recent Fed Outlook. I still think that job growth has enough momentum to keep going despite sectoral problems. 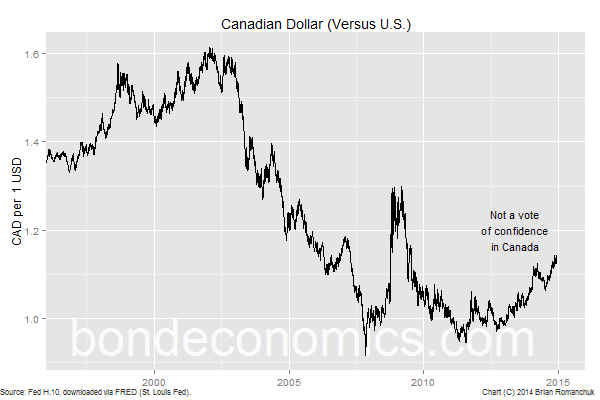 As is typical, I am more bearish on Canada than the United States. The price for the sludge pulled out of the Tar Sands has dropped to $50 a barrel, and the Albertan economy is staring another ugly retrenchment in the face. Canadian bonds are at what used to be considered crazy JGB-like levels (at the timing of writing this, the 10-year yield is at 1.89%), and so it appears that the bond market agrees with my assessment. Meanwhile, the Canadian dollar is reacting and shedding its over-valuation. 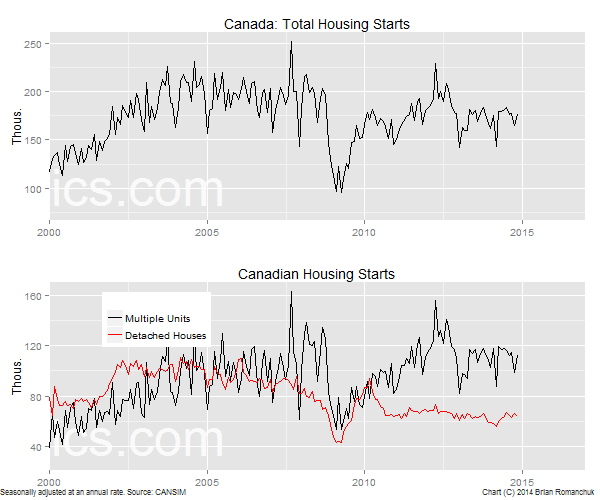 The real worry in Canada (outside of Alberta, which will be a write-off if oil does not recover) is the housing market. Calgary is one of the three big cities which have buoyant housing (the others are Toronto and Vancouver). An meltdown in Calgary could easily spook the national lenders.

As shown above, detached housing starts have already corrected, at an annual pace near 60 thousand units, versus 100 thousand units seen in the early 2000s. Multiple units - mainly condos - remain strong, but the condo market probably will only crack when lenders are no longer willing to back speculators. (The United States had exactly that form of a delayed reaction in condos.)

If the Fed hikes, there will be noises about the Bank of Canada (BoC) following with a lag. Although that would be the usual BoC reaction function, the carnage in the oil patch may upset that scenario.

Email ThisBlogThis!Share to TwitterShare to FacebookShare to Pinterest
Labels: Canada, Commodities, Peak Everything, US